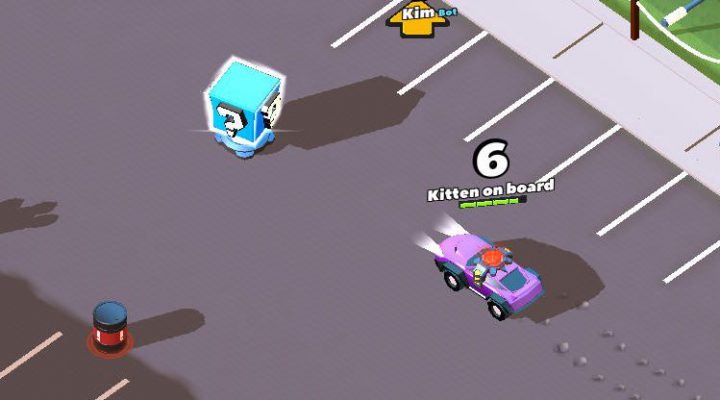 Crash of Cars is a multiplayer car battle arena from Not Doppler. In this game, players will attack each other with a variety of weapons and items attached to their vehicles. Our Items Guide will help you master car cannons, missiles, and more.

Some quick item tips: Items are visible both on your car and opponents’ cars: try to learn what items look like so you can see what your opponents have equipped. You’ll be more prepared to avoid their attacks if you know what’s coming—e.g. if someone in front of you has a Rear Cannon, don’t drive right behind them and give them a free shot.

You can use items while in the air, so if you want to fly farther you could Boost in mid-air or you can shoot Cannons just before landing to get the drop on someone. 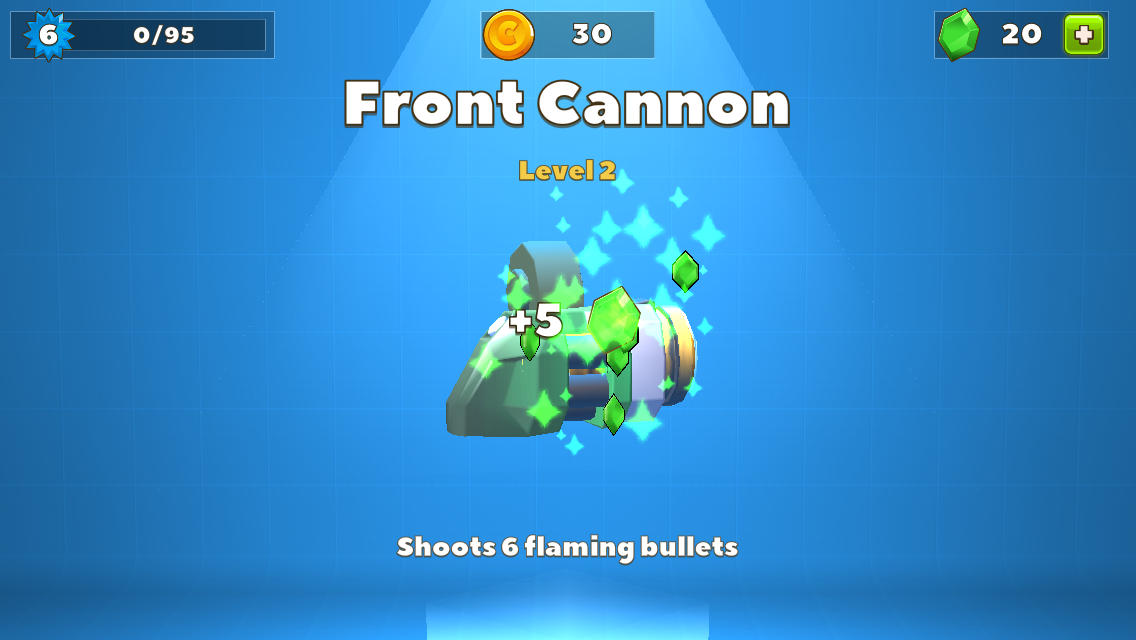 As you gain levels, you will eventually start earning higher level weapons. You may see someone with a double Flamethrower or a Cannon that shoots twice as many cannonballs. They are higher level; just keep buying cars from the prize machine and you will unlock these stronger weapons, too.

As mentioned in our tips guide, we recommend picking up every item box you come across to prevent other players from getting items. It takes about 20 seconds for an item box to regenerate, so picking one up can give you a nice break before someone has another weapon in hand. 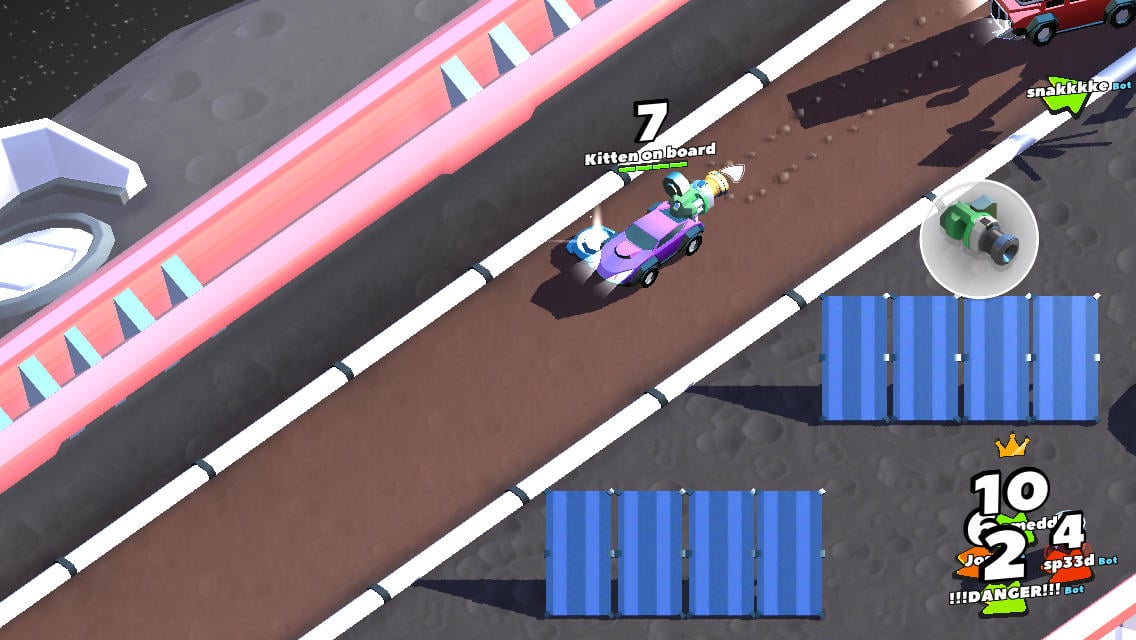 These cannons are identical except for their placement on your vehicle. They look like a large green pipe affixed to their associated area of the car. When activated, it immediately shoots four cannonballs out in that direction. When you level up the Cannons they will shoot more cannonballs total.

If you zigzag while driving, the cannonballs will as well, allowing you to cover a wider area in front or behind you. The Side Cannon can show up on either side of your car when activated.

Like most items in the game, Cannons work well offensively or defensively. If you’re being chased, a Rear Cannon is one of your best options for quickly ending a pursuer’s interest in you. And a well-timed and zagged Cannon in the middle of a fight can dispatch multiple enemies at once. 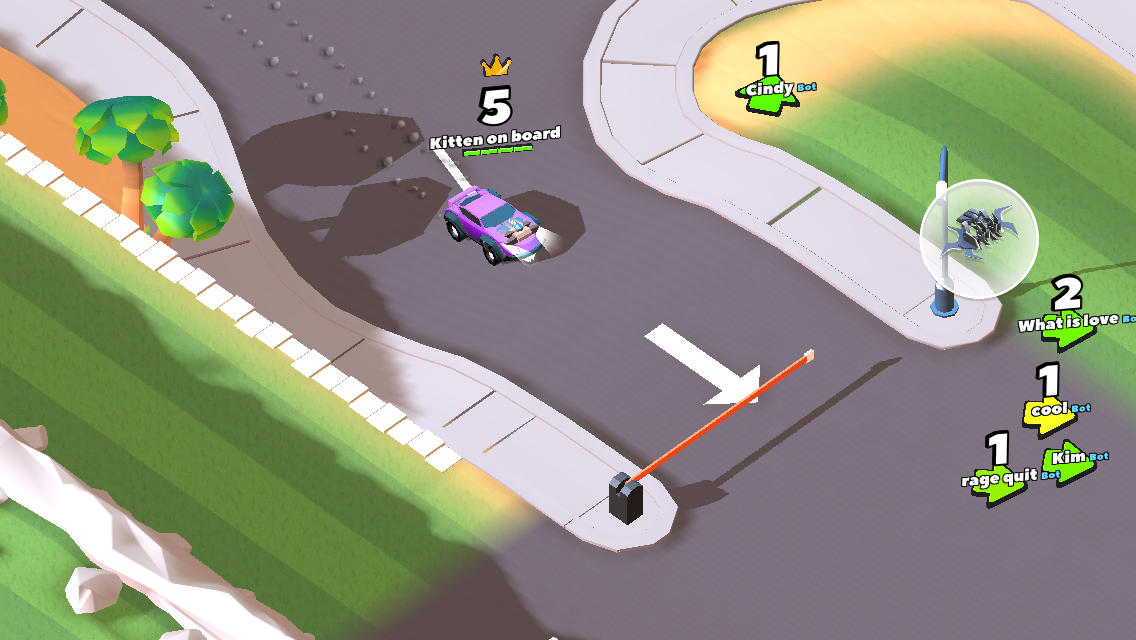 Before they’re activated, Spikes are a barely visible gray clamp on the hood of your car. Once activated, Spikes are a long row of gray spikes that are attached to the grill of your car. When you run into an opponent head-on, the Spikes will knock them back and do extra ramming damage. Spikes can also be ejected before they expire, turning them into a projectile weapon. Spikes last about 12 seconds before they disappear, so if you time it right, you can equip them for most of that time and then eject them just before they vanish. 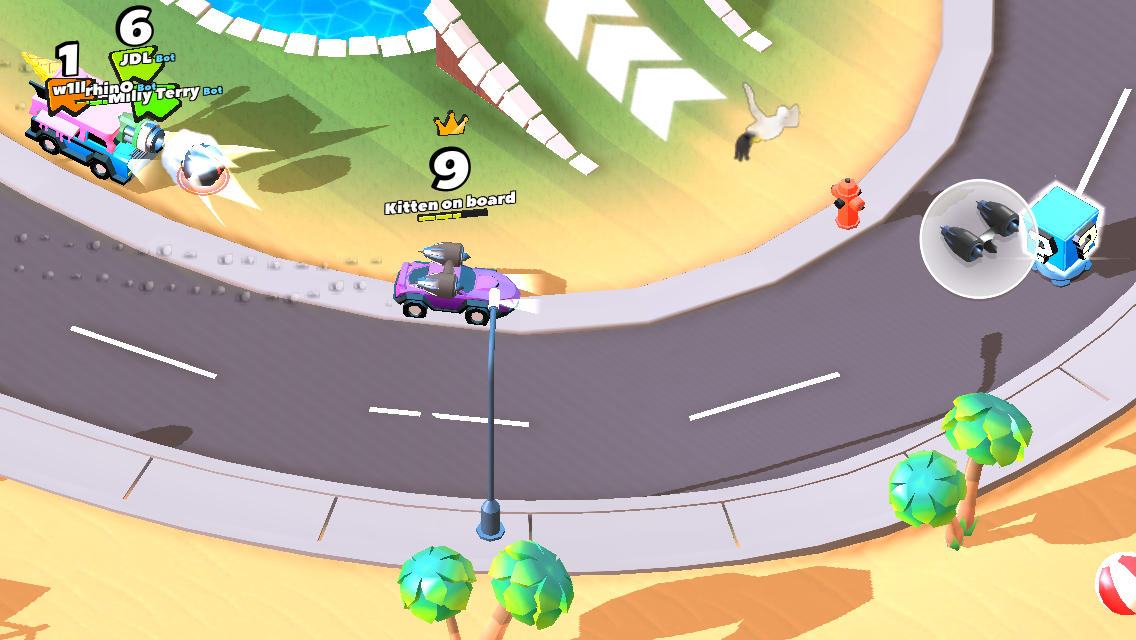 Boost looks like two little black rockets attached to the top of your car. When activated, a line of white arrows appears out in front of you; you have about two seconds to decide which direction you want to go and then you’ll shoot off wherever you were facing. If you Boost into an opponent you’ll do more damage than if you just ran into them normally, but for the most part, Boost is useful for getting away from other players quickly. 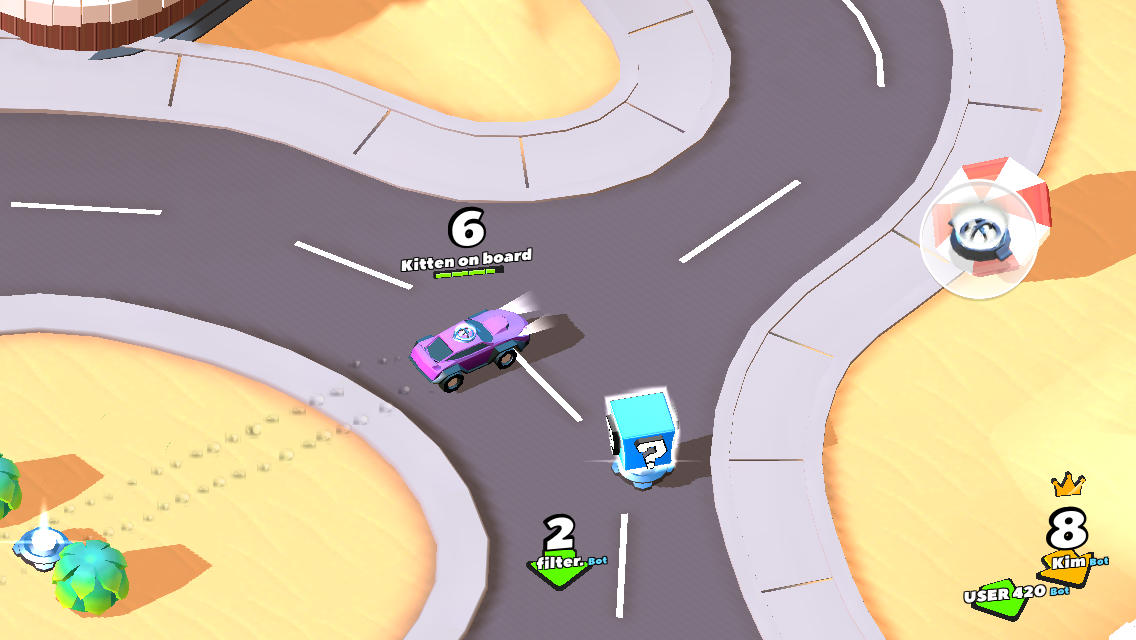 Unactivated, Shield is just a shining white circle on top of your vehicle. When activated, you’ll have a white glow around your car as long as the Shield is up. Shield protects you from any damage, including falling off cliffs or into water. It won’t protect you from being frozen, but you can’t be killed while in the frozen state if your Shield is still up. Shield can be ejected like Spikes; if ejected near an enemy, you will knock them away from you. 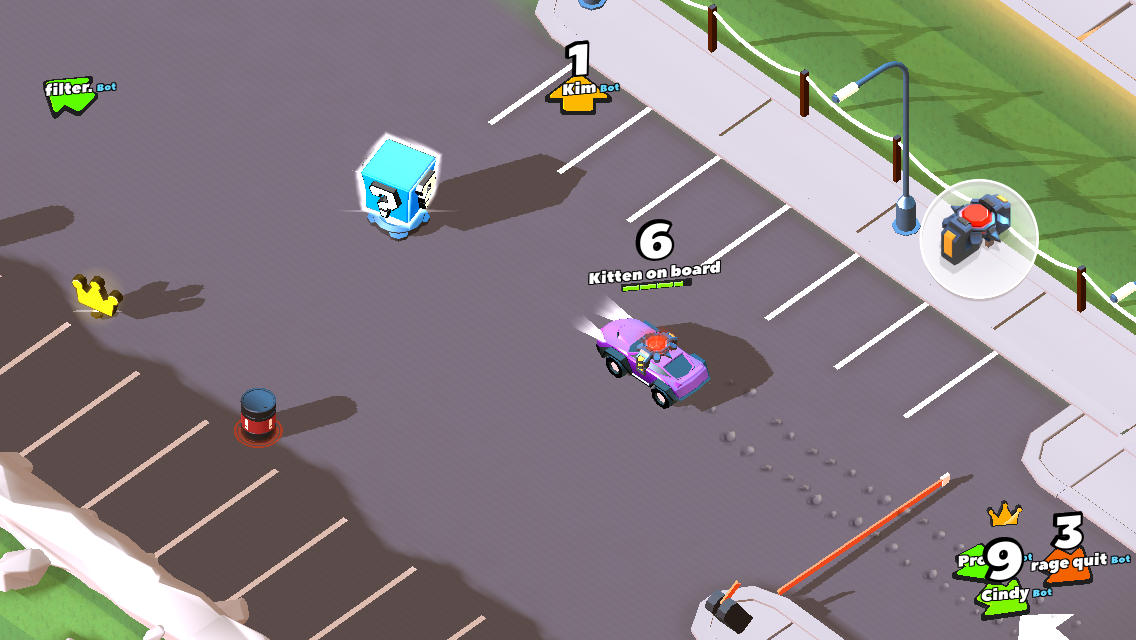 Land Mine is a red circle clamped to the top of your vehicle. When activated, it drops two mines behind you that explode if a car drives over them. Mines pop up and out when dropped, so they take a second to actually land on the ground—this means they aren’t very useful if an enemy is right on your tail. The mines do land catty-corner to one another, so they’re useful in tight corridors like a bridge. You can be harmed by your own Land Mines, so be careful not to trap yourself behind them. 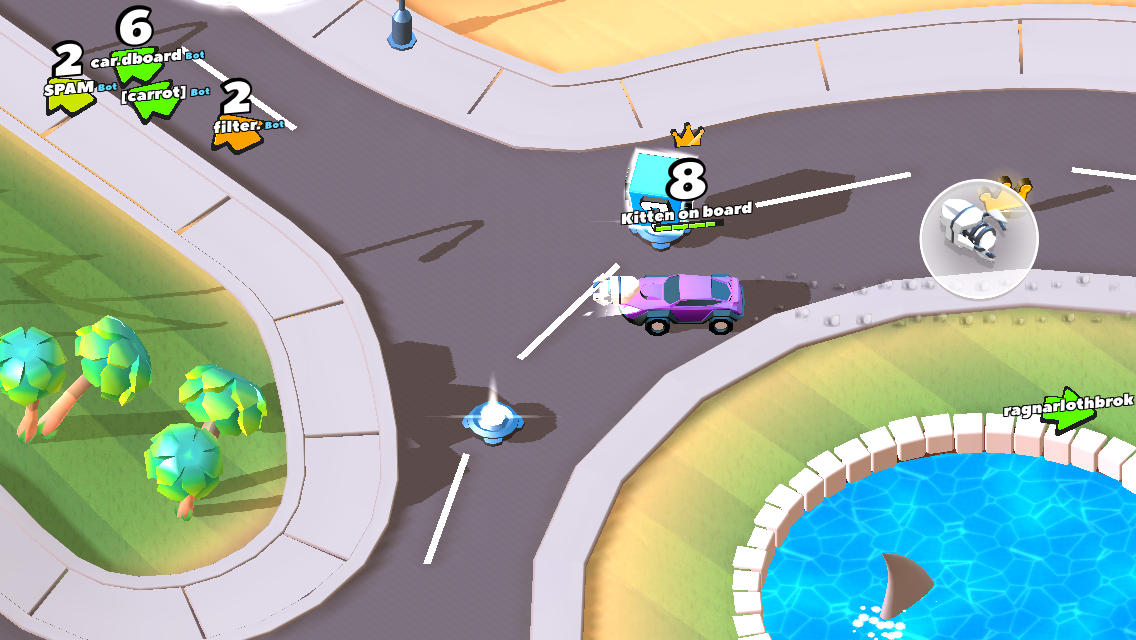 Teleport looks like a white Portal gun attached to the front of your vehicle. When activated, a white portal opens up around your car and transports you a few feet away from where you just were. Teleport works in a straight line, so you should face the direction you want to travel before activating it. It doesn’t send you too far—about ten cars’ length—and it takes a second to actually send you, so it’s not great for major escapes. If you reappear on an opponent after teleporting, it’s almost always an insta-death for the other vehicle, so teleporting into a group of enemies can be a quick way to dispatch them—if you can aim it just right, which is tricky. 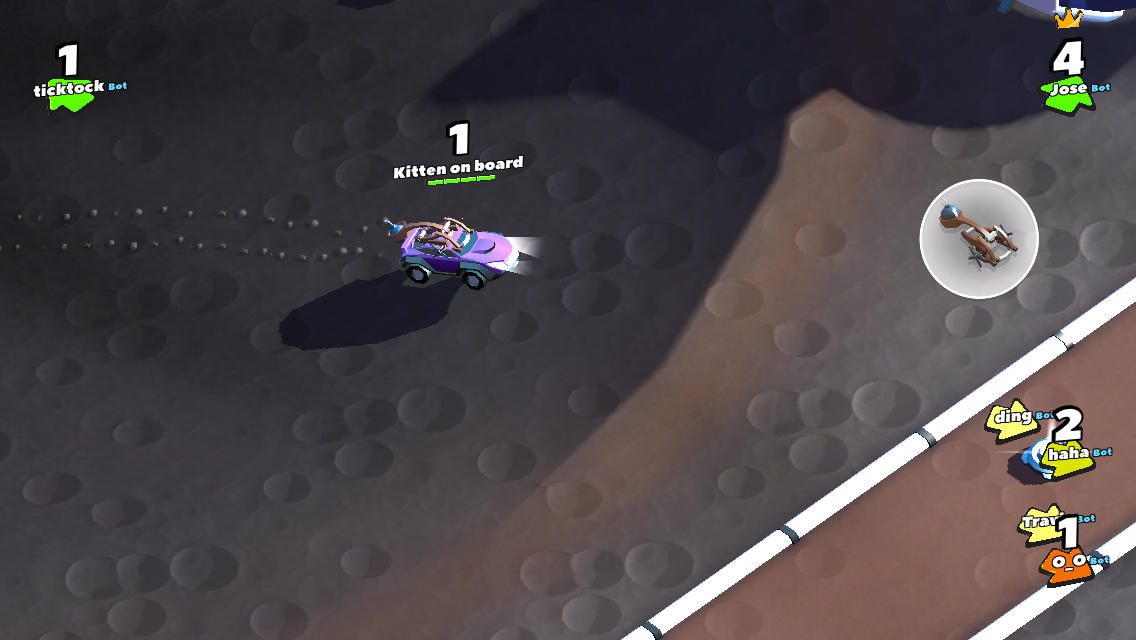 Trebuchet is a catapult on top of your car. When activated, it paints a red ring on a nearby area and then drops a bomb in that location a few seconds later. Trebuchet does a lot of damage if it hits, but the warning it gives ahead of time makes it fairly easy to avoid. It’s best used when cars are distracted or as a getaway device when being chased. For more direct confrontations, if you can knock someone into your Trebuchet area of effect it will usually pay off; the brief stun after they’re knocked back will prevent them from escaping before the explosion hits. But its aiming is a bit hard to nail down—it appears to automatically target high-value objects nearby, whether that’s an item box or an enemy—but if there’s nothing nearby it just sort of goes wherever. 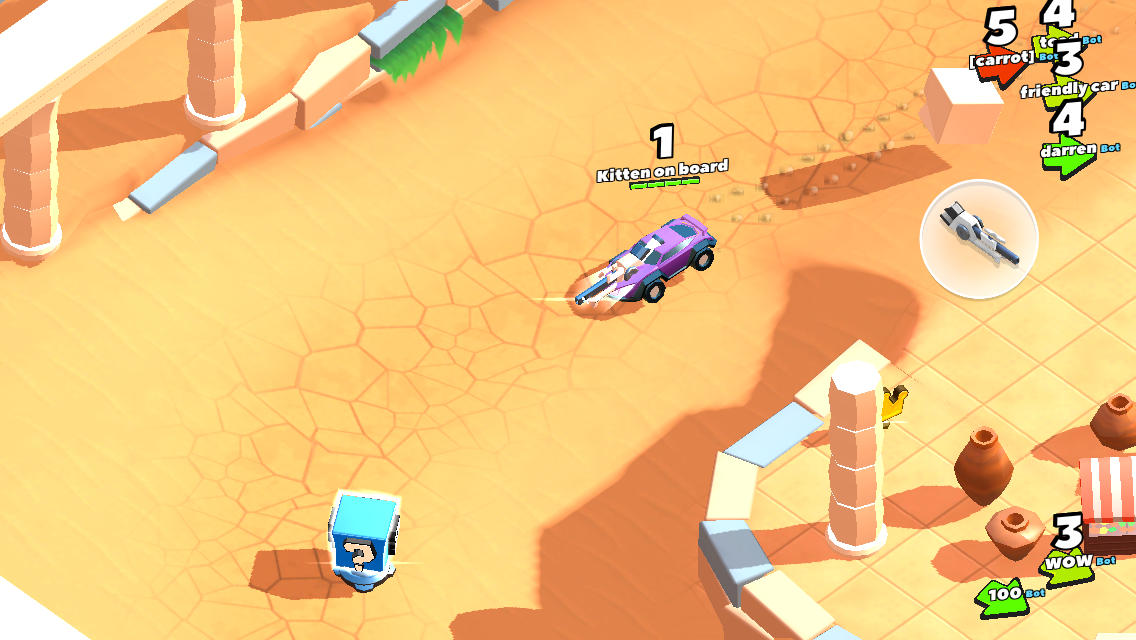 Rail Gun is our favorite item in the game. It looks like a giant white laser gun attached to the hood of your car. When activated, the Rail Gun paints a long white line straight out in front of it. You have a couple seconds to move when the line will move with you, then it’s frozen in place and will release a giant burst of energy shortly after. Anyone caught in the Rail Gun’s line is almost always instantly destroyed. The line stretches extremely far, crossing about a third of the map from the location it’s deployed. We recommend aiming at a giant group of enemies and letting it work its magic. The Rail Gun also works as a defensive tool if you’re being chased and can get a little leeway; handbrake slightly to point the Rail Gun at an angle and then drive away on the other side. Whoever’s chasing you will either have to cross the gun’s path (very risky) or wait until it disperses, at which point you’ll be long gone. 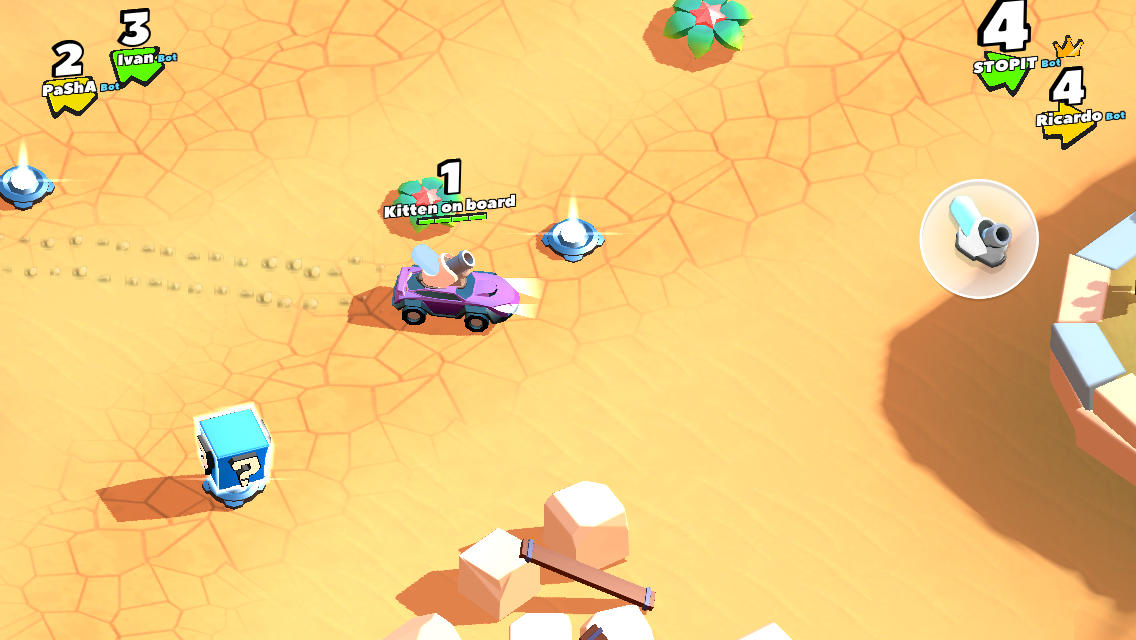 The Freeze Cannon is a white snow cannon on top of your car. When activated, it spits out a giant snowball that slowly rolls in a straight line across the map. It will freeze any vehicles it hits, and if you drive into a frozen vehicle, it will shatter and be destroyed.

You usually have to run into the frozen vehicle and keep running into them for a couple of seconds before this will occur. The snowball will continue rolling for over half of the map before it vanishes, although it is susceptible to falling off cliffs. The snowball appears about a car’s length away from you and takes a second to materialize after you activate it, so the Freeze Cannon is not great for defense against someone that’s right on top of you. We do enjoy activating it and then driving behind the snowball like a giant wintry shield.

If you are frozen, you can still use items. Activate a Shield to protect yourself or a Teleport to zip away–you’ll still be frozen when you land, but you’ll hopefully be farther away from the freezer. We don’t recommend dropping Land Mines unless you’re positive you’re going to get destroyed and want to go out with a bang. 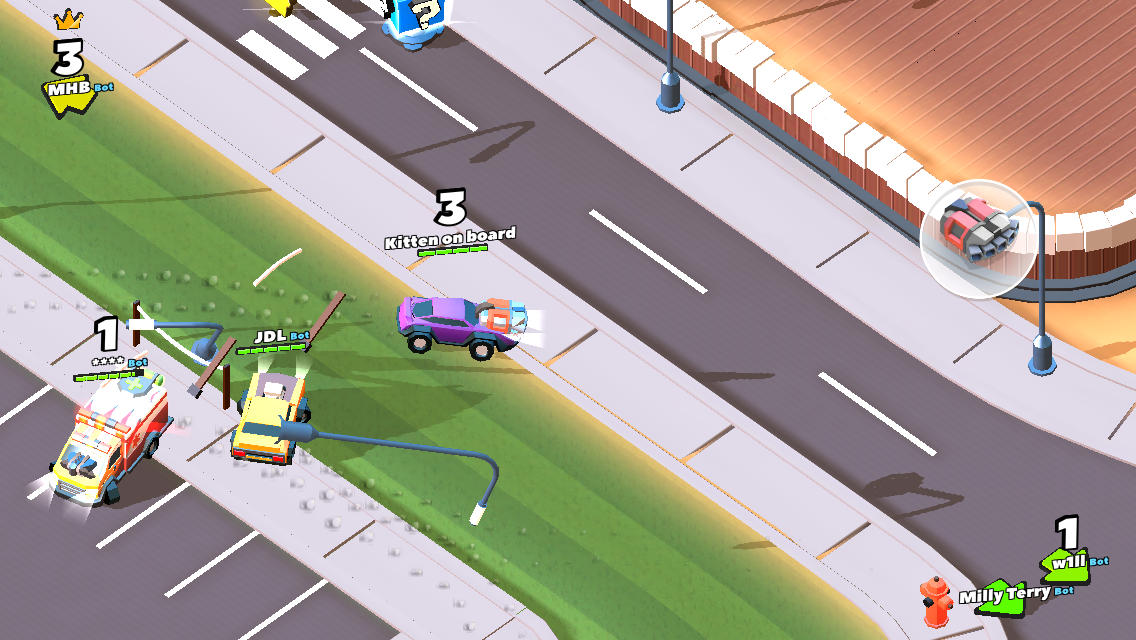 The Spread Cannon looks like a Transformer’s hand stuck to the hood of your vehicle. When activated, it displays three white lines spreading out from your car in an arc. A couple of seconds later, it shoots a cannonball along each of those lines. Because of its slow activation and warning lines, the Spread Cannon is not great for quick defense. It’s better used as a clearing tool when entering a potentially dangerous area. 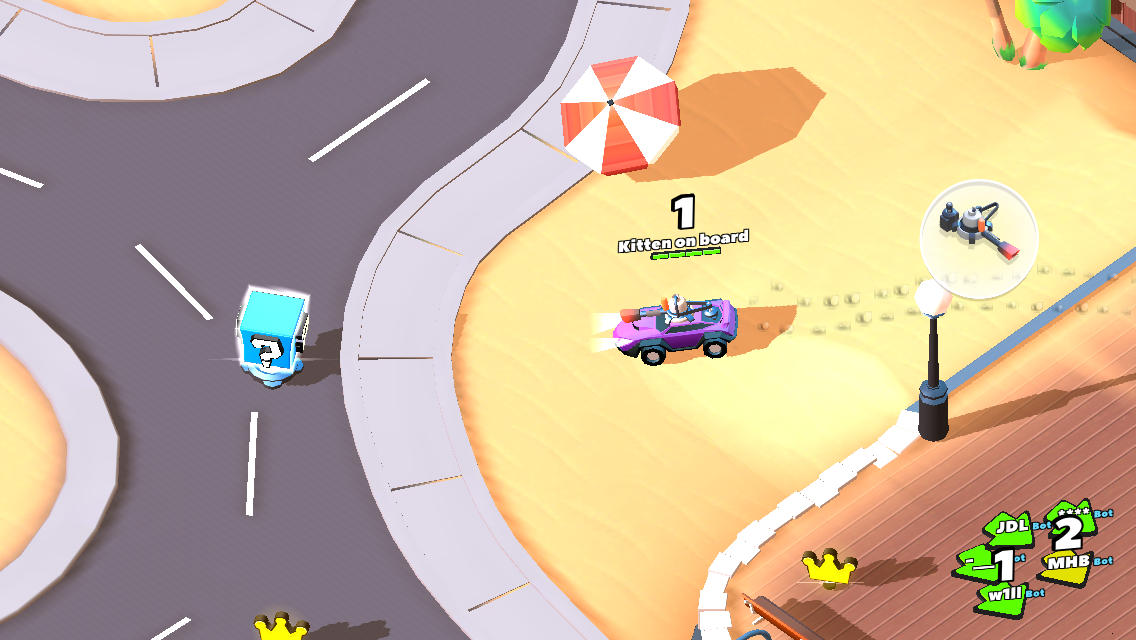 The Flamethrower is a red-tipped torch on top of your car. When activated, it shoots out an arc of flames in front of you. These flames last about twelve seconds, but the Flamethrower can also be ejected, leaving it stationary and shooting flames in the direction you dropped it. You can use it like a defensive turret this way. We also like to eject the Flamethrower if someone is chasing us; it forces them to drive through the flames, and often causes enough confusion that they stop following us. Unlike Land Mines, your own Flamethrower will not hurt you, so if you eject it and drive through it you will not take damage. 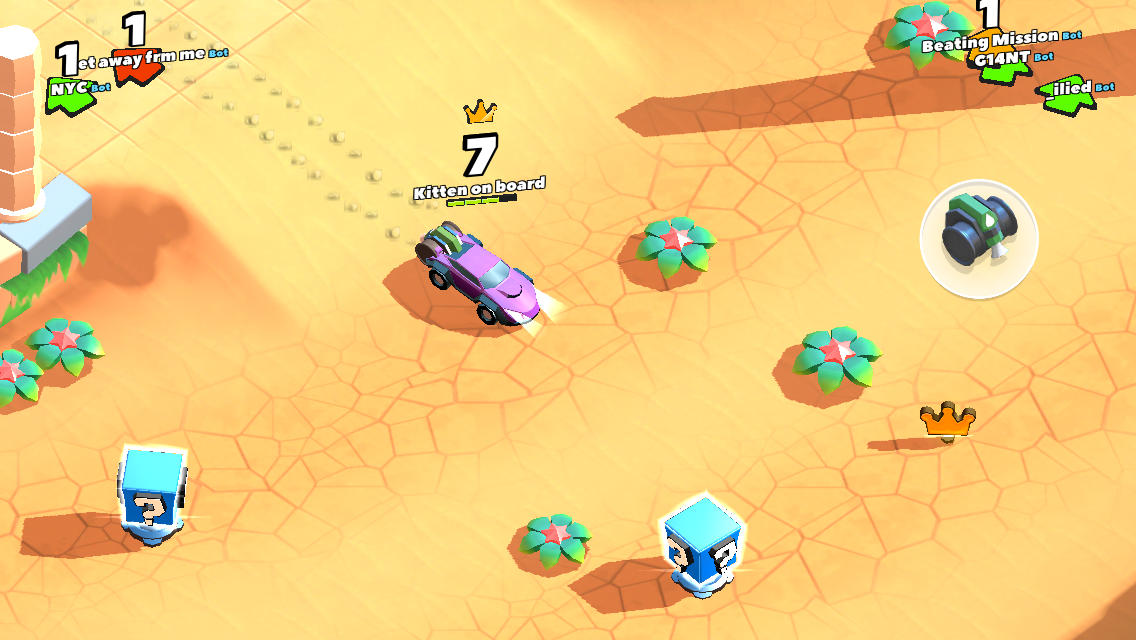 Oil looks like an oil drum clamped to the trunk of your car. When activated, it drips two large puddles of oil behind you. Oil does not cause damage but it will make anyone who hits it lose control and spin out. You can slip in your own oil. Oil is ideal for interrupting anyone chasing you. If dispatched near a cliff, you can sometimes force opponents to slide off the side. One of our favorite tricky techniques is intentionally hitting oil if we have a Front or Side Cannon equipped and then activating it: you’ll shoot cannons in a wild circle as you spin around. It’s not always helpful, but it is fun. 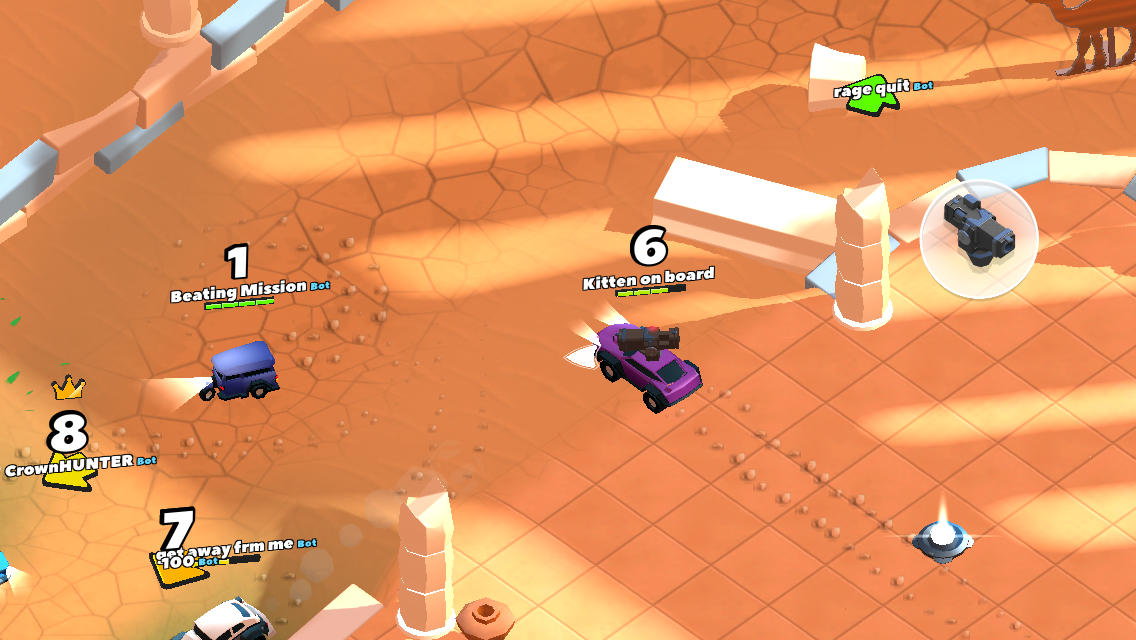 Homing Missile looks like a rocket launcher on top of your vehicle. When activated, it shoots out a missile that locks onto an enemy and chases them, eventually circling and then hitting after a couple of rotations. In order to lock on to someone, you need to see the white arrow pointing out of your car—this indicates the missile has a lock. In the image above, our arrow is pointing at the Tuk Tuk to our left. The direction of the arrow indicates who it’s targeting, and it can target in any direction (but it will choose someone close enough). If you are the target of the Homing Missile, you will be painted with a large red target and hear the humming of the missile closing in. You can dodge it by hiding behind an obstacle like a cliff face, which it will run into instead. You can also outrun it by zigzagging and making sharp turns until it fizzles out. 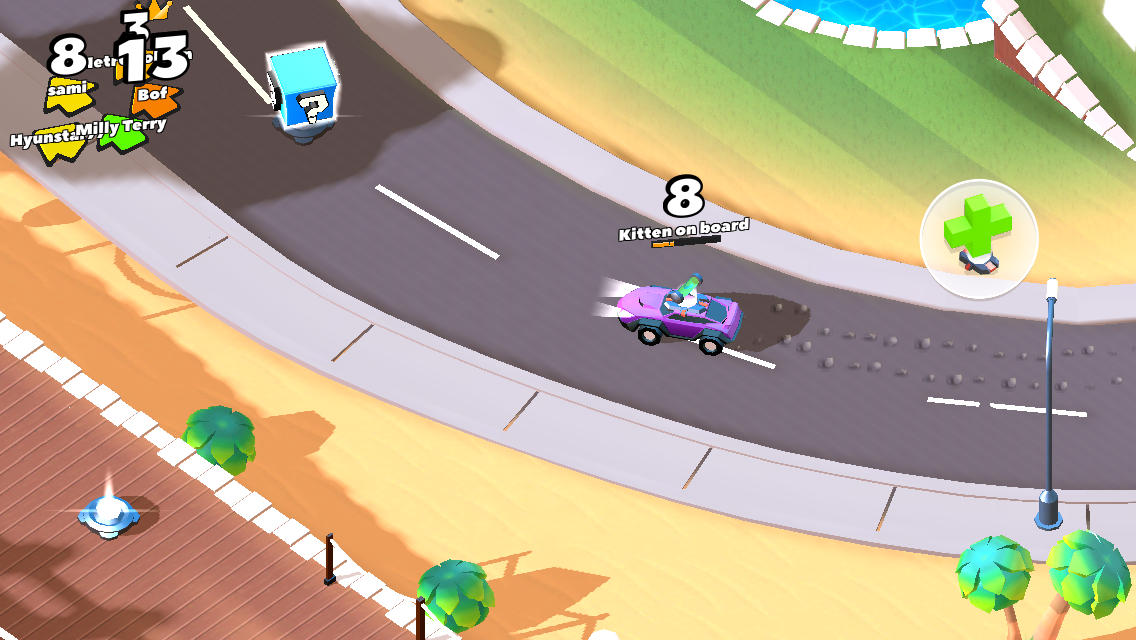 Health is a rotating green vial on top of your car. When activated, it drops two Health cubes on the ground—one in front of you and one behind. If you keep driving straight, you should be able to grab the one in front, but you’ll have to turn quickly to get both. Enemies can grab Health you drop (and vice versa), so whenever possible, we prefer to find an unpopulated area before deploying Health. Ambulances drop Health every 30 seconds and also when destroyed, so they’re good enemies to keep an eye on if you need a pick-me-up.

How to Unlock All the Special Buildings in Bit City