Color 6 is a deceptively simple puzzler. Seven colors. Six shapes. Make six-sided figures of the same colors on a grid. And yes, in terms of gameplay, the process of laying pieces on the board is nothing complex. But the game itself with its heavy emphasis on RNG, requires some serious thought and manipulation to succeed at if you want to get anywhere near a high score. You have a limited number of moves, and dozens of possible pieces that can come down that conveyor belt. The odds of you actually getting a piece you need when you need it are slim.

Though the randomness of the pieces in your hand will more often than not be the determining factor in where and how your run ends, there are plenty of things you can do on the board to stave off the creeping jaws of defeat for as long as possible. Here are a few Color 6 tips, cheats and strategies to maximize your hexagons. 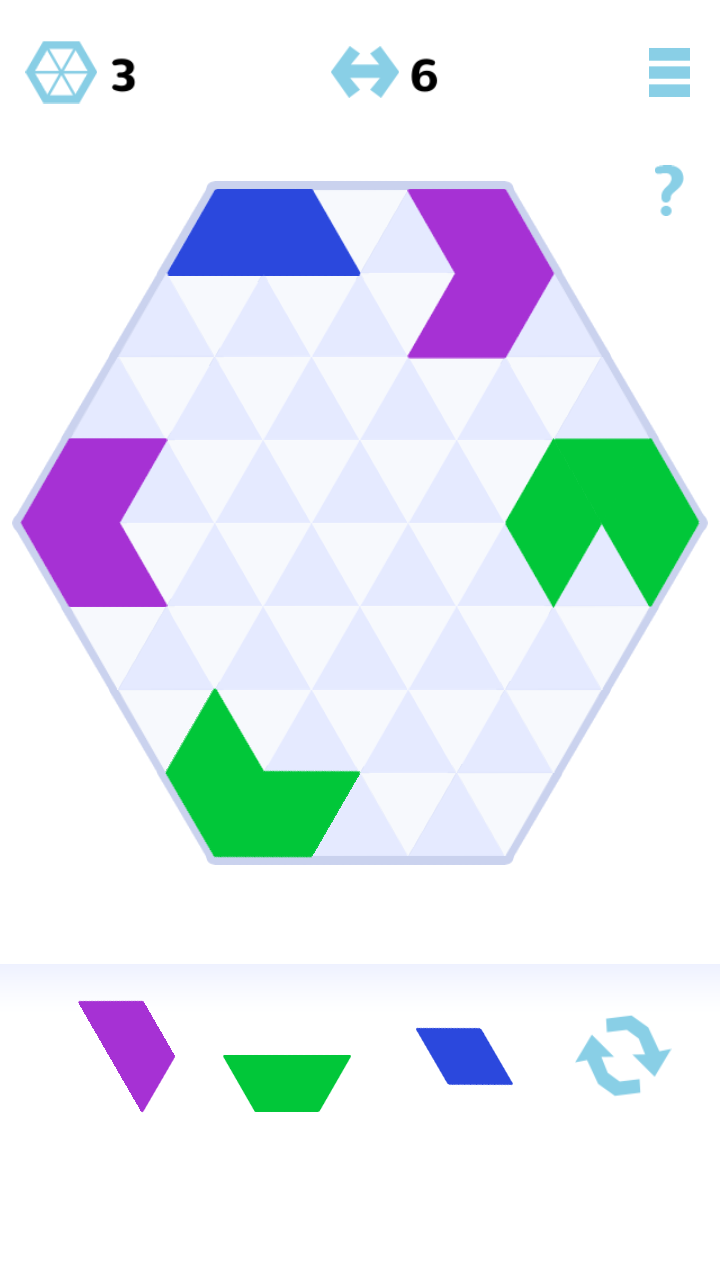 Though the board will likely shift repeatedly throughout your run, set up your initial tile placement so that you have six hexagons against the walls, ideally one of each color. You can use the image above for a guide, mimicking the placement of the edge hexagons. This gives you more room to maneuver as you start to fill up the board, and is a good set-up for the ideal placement that allows you to have as many open hexagons on the board as possible later.

If necessary, with that placement, you can fit a total of four more possible hexagons in the middle. I came close in the image below, but the center-left dark blue hexagon would need to be moved up a row and one space to the left to accommodate another below it. Of course, you don’t want to have that many open hexagons on the board at once, because that leaves you absolutely no room for piece overlap or error. But it’s a possibility, should you need to exercise it. 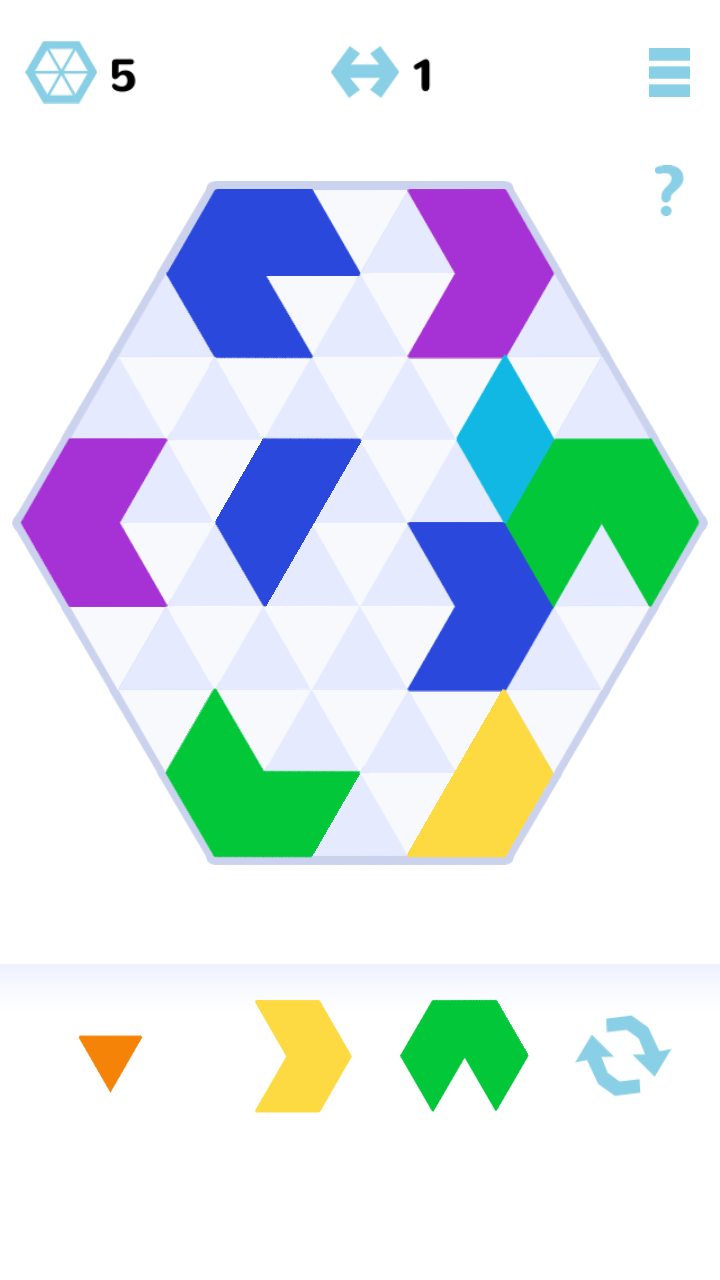 Whenever possible, point your possible hexagons “outward,” so that the open space where you’re still missing pieces faces an opening. In a perfect world, you’d match all pieces with another piece that fit them exactly, but Color 6 is not that perfect world. You will often need to use pieces that will leave some overlap and other pieces behind, and when that happens, you usually don’t want those extra pieces hugging an edge. You also want to ensure that’s an option at all, as facing your pieces toward a wall is a surefire way to trap yourself into having fewer options for completing a hexagon.

Oh My God I Have Nothing but Big Triangles 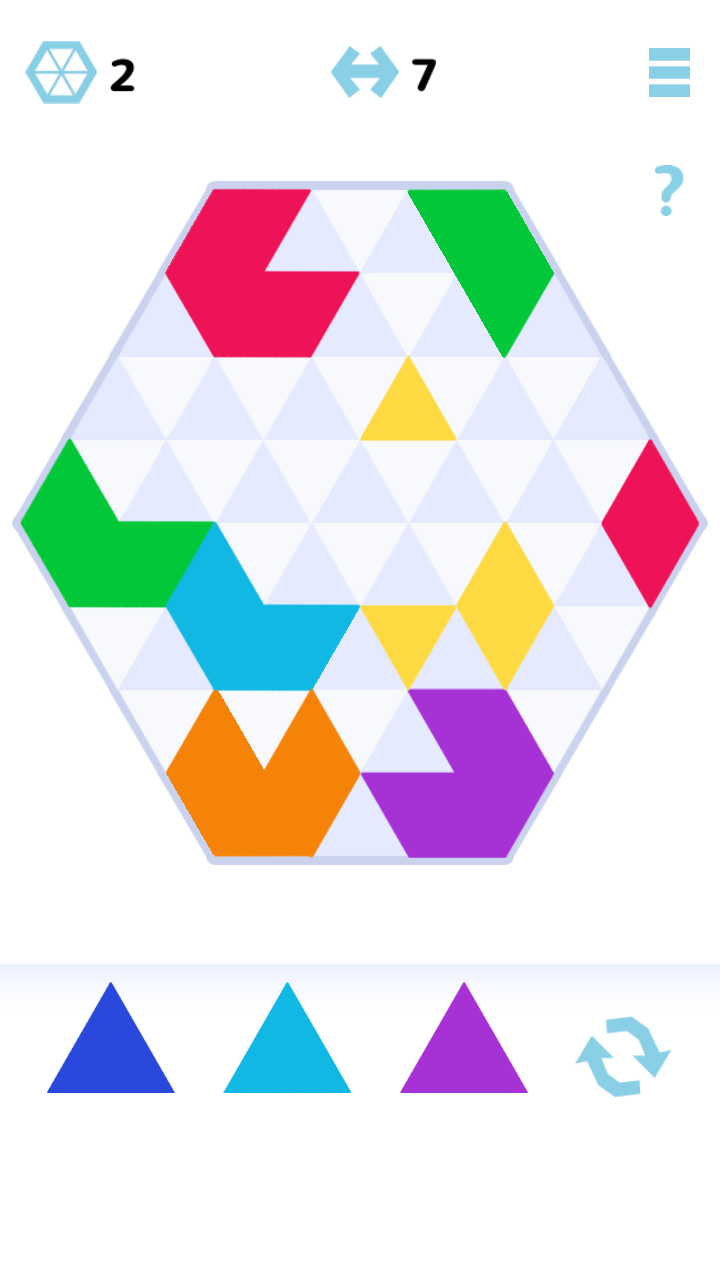 Big Triangles.  They’re the WORST. They’re the only piece that doesn’t fit perfectly into a hexagon, and always leaves a little triangle leftover. What to do with Big Triangles? It’s inevitable that your hand will be full of them at some point during the game.

The trick with Big Triangles is to be keenly aware of what will be leftover when you’re done with them. There are essentially two options: a trapezoid (if you use one point to fill in a single triangle space), and a little triangle (if you butt a side up against a trapezoid). Neither of those are bad things on their own, but given how you’ll have to use the Big Triangle, they’ll almost certainly put a leftover in an undesirable spot. The best time to use a Big Triangle is when you can quickly clear its leftovers off the board with another piece. Don’t horde the triangles until you have no other options left. Be aware of what they’re going to do, and try to clear them quickly to make room for pieces we actually like.

Refreshing a new piece into your hand is a dangerous game, as it takes up a precious turn and you have absolutely no idea what you’ll get. When there’s space on the board and moves to spare, there’s rarely a reason to do it. And when you get stuck, refreshing can hurt you more than it helps. Refresh with extreme caution–there’s a balance somewhere in between that early game flexibility and late game panic where refreshing may help you avoid creating bad situations, but it’s tough to gauge.

Know When It’s Over 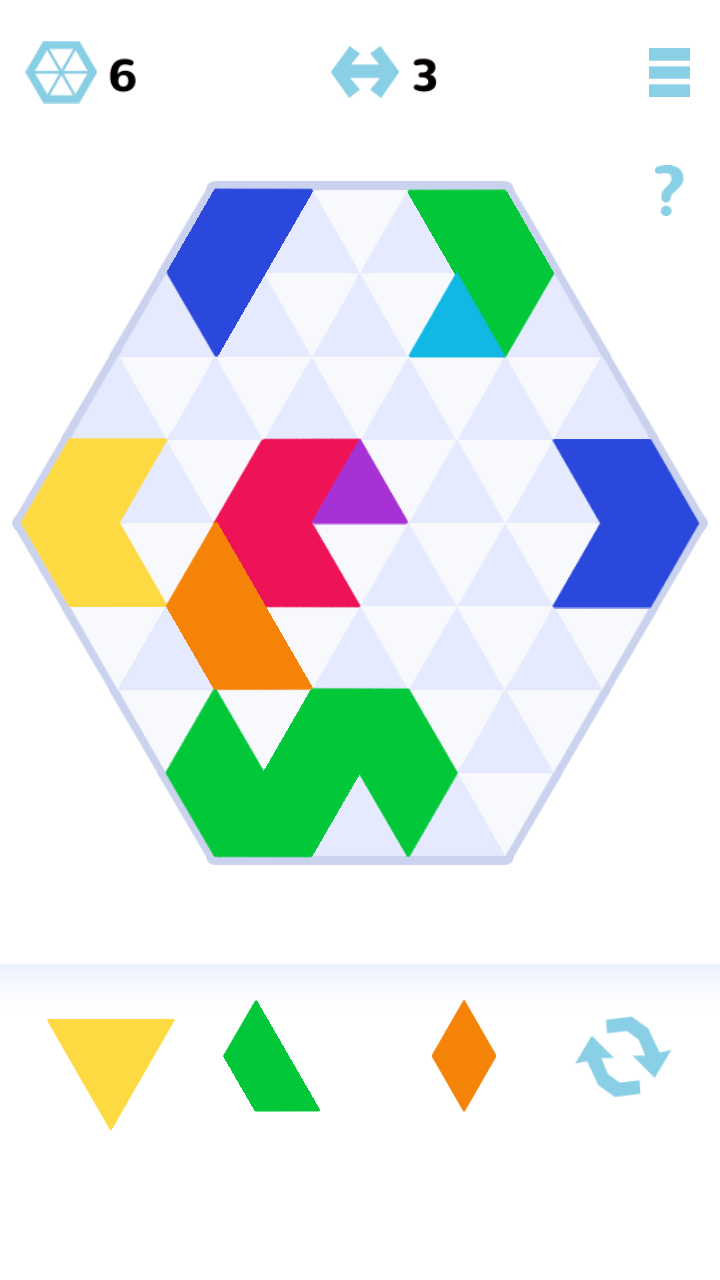 There will be a point where you know the game is over. Your board is full of nonsense pieces overlapping one another, you don’t have any good pieces in your hand, and things just look hopeless. Do not go out easily. When you hit this point, it’s time to just start making as many hexagons as you can, even if they don’t quite make sense with your carefully laid board plan. But you want a high score, right? So make some freaking hexagons. At worst, you go out with a higher score than you thought you would. At best, you gain enough extra moves, clear enough board, and have enough good luck to keep the game moving when you thought it was over.

And on that note, too, know when your moves are getting low, even if your board looks good. Planning spaces ahead is important, but so is, you know, actually scoring. If you’re high on space but low on moves, don’t be afraid to make some weird hexagons to get things moving again.

How to Unlock Every Skin in Dunk Hit