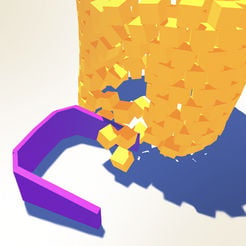 Collect Cubes does exactly what it says on the tin. You play as a giant horseshoe and have to zoom around a variety of levels collecting all cubes and bringing them back to your base. Doing so makes all cubes the same colour as you, which marks them as collected.

Admittedly, there’s not an awful lot of challenge involved with Collect Cube. It’s a pretty zen experience overall – cleaning up cubes can be quite cathartic. There’s no time limit, rarely any obstacles, and no bad guys to fight.

However, every five or 10 levels or so you do have to tackle a bonus round, which showers you with rewards for collecting a bunch of blocks within a time limit. This is where your skills will be put to the test, as you strive to collect as many as you can in a short period.

To help you, we’ve put together a beginner’s guide to the experience. It won’t turn you into an expert, but it should help nudge you on the path to becoming one.

In Collect Cubes, you have to gather up all of the coloured cubes in a horseshoe and drag them back to your base. At this point they’ll change colour to the same as your horseshoe, meaning you have successfully collected them.

Collect them all and you’ll complete the level, earning rewards for doing so and moving onto the next. There’s no time limit or extra rewards for doing anything fast whatsoever, so it’s best to look at Collect Cubes as a zen experience when you just want to chill out.

There is one exception though: bonus levels. These crop up every five or 10 levels or so and challenge you to collect as many cubes as you can within a strict time limit. The more cubes you collect, the more rewards you earn. It’s a shame the whole game isn’t like this.

There’s very little point in writing tips for the base game, as it’s so easy you could complete each level blindfolded. Instead, we’re going to focus the following tips and tricks on the bonus round, where you actually will need some tips to get the best out of it: