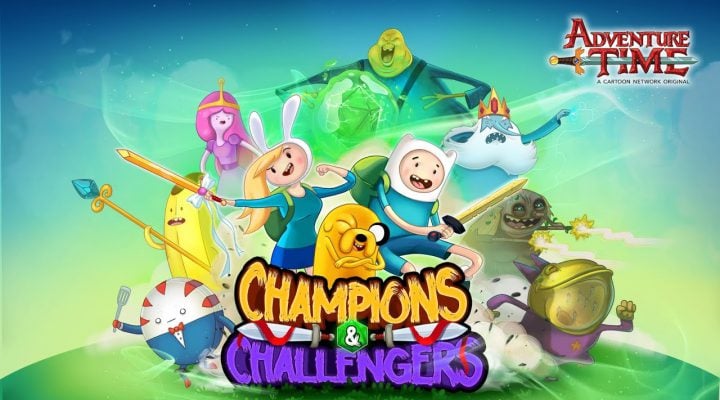 Finn, Jake and their friends have been in some weird and hairy predicaments, but maybe none quite as harrowing as Champions and Challengers – Adventure Time. YesGnome and Cartoon Network have devised an all new foe, the Dice Lord, who has control over both heroes and villains from the Land of Ooo like no one before him.

They’re going to need your help to break free. And you might need some help too, which is why we’re here. We’ve placed ourselves in mortal danger (note: not really) by taking on all kinds of foes in the tactical battles from Champions and Challengers to compile a list of Tips, Cheats and Strategies that will help you take on all comers.

We’d say these tips are mathematical, but you already probably knew that. 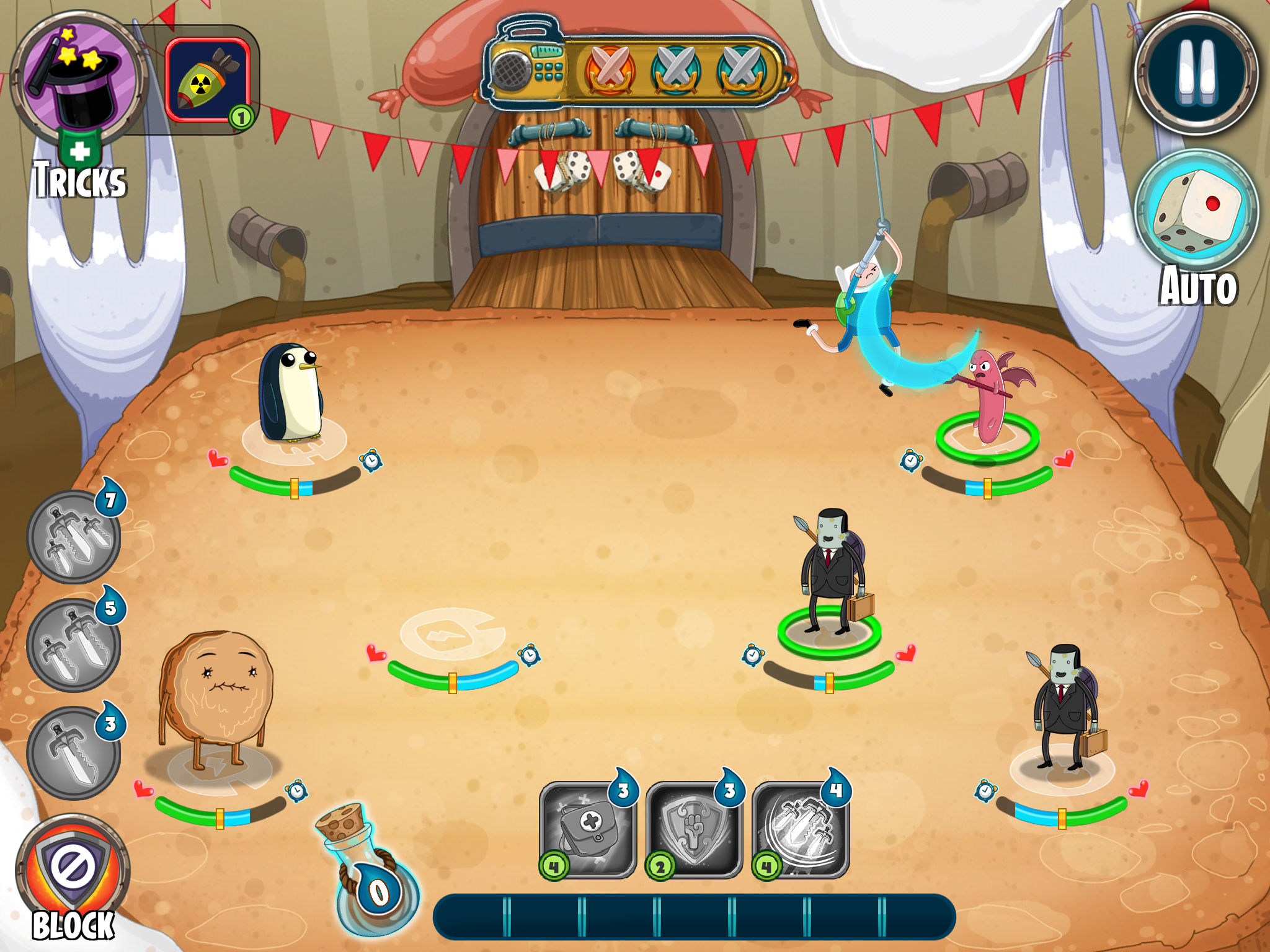 You know how some of the Final Fantasy games had combat that was like a hybrid of real-time and turn-based strategy and then always had a fancy, made-up name? Champions and Challengers is like that too, but without the need to invent any words.

Each battle features a team of characters under your control against one or more waves of enemies. The turn-based part comes as each character acts in turn after a bar fills up beneath them indicating when it’s their turn to act. For basic attacks, you simply swipe the enemy you want your characters to attack, and they will all subsequently attack that character in turn. To switch targets, simply swipe on a different foe.

Bonus Tip: You can also have your characters attack multiple enemies by swiping over more than one of them, effectively turning any attack into an AoE affair. The thing you need to remember is that your character’s damage is split between the targets. 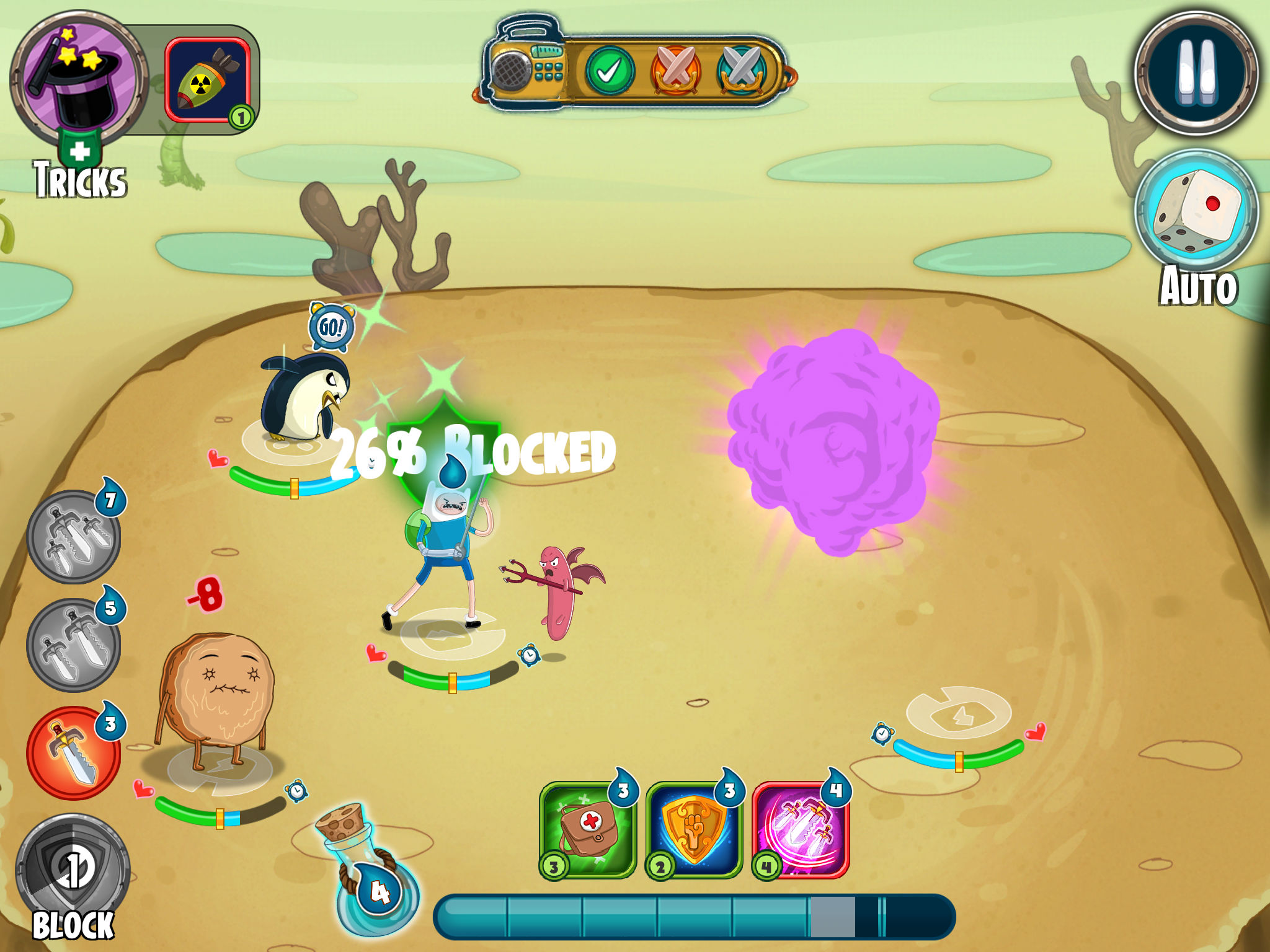 The real-time part comes on defense, as you can mitigate damage done by enemies by tapping on the ‘Block’ button in the lower-left corner of the screen. Timing is key; each block lasts only for a few seconds, so pressing it too early or too late is no good.

Blocking also helps fill the meter at the bottom of the screen that lets you unleash abilities. Abilities can be dragged and dropped onto your own characters (for healing or defense) or enemies (for attacks) at the cost of the appropriate amount of the meter. Each character has its own abilities, so you can definitely experiment to find a mix you like the most.

Bonus Tip: Like many tactical games, this one has a rock-paper-scissors relationship between the five character classes so that each one does more damage against one class and less against another. It looks like this: Dark -> Science -> Magic -> Might -> Fire -> Dark. Each battle tells you what classes your opponents will be prior to the start, so use that knowledge wisely.

Your Friends, the Dice 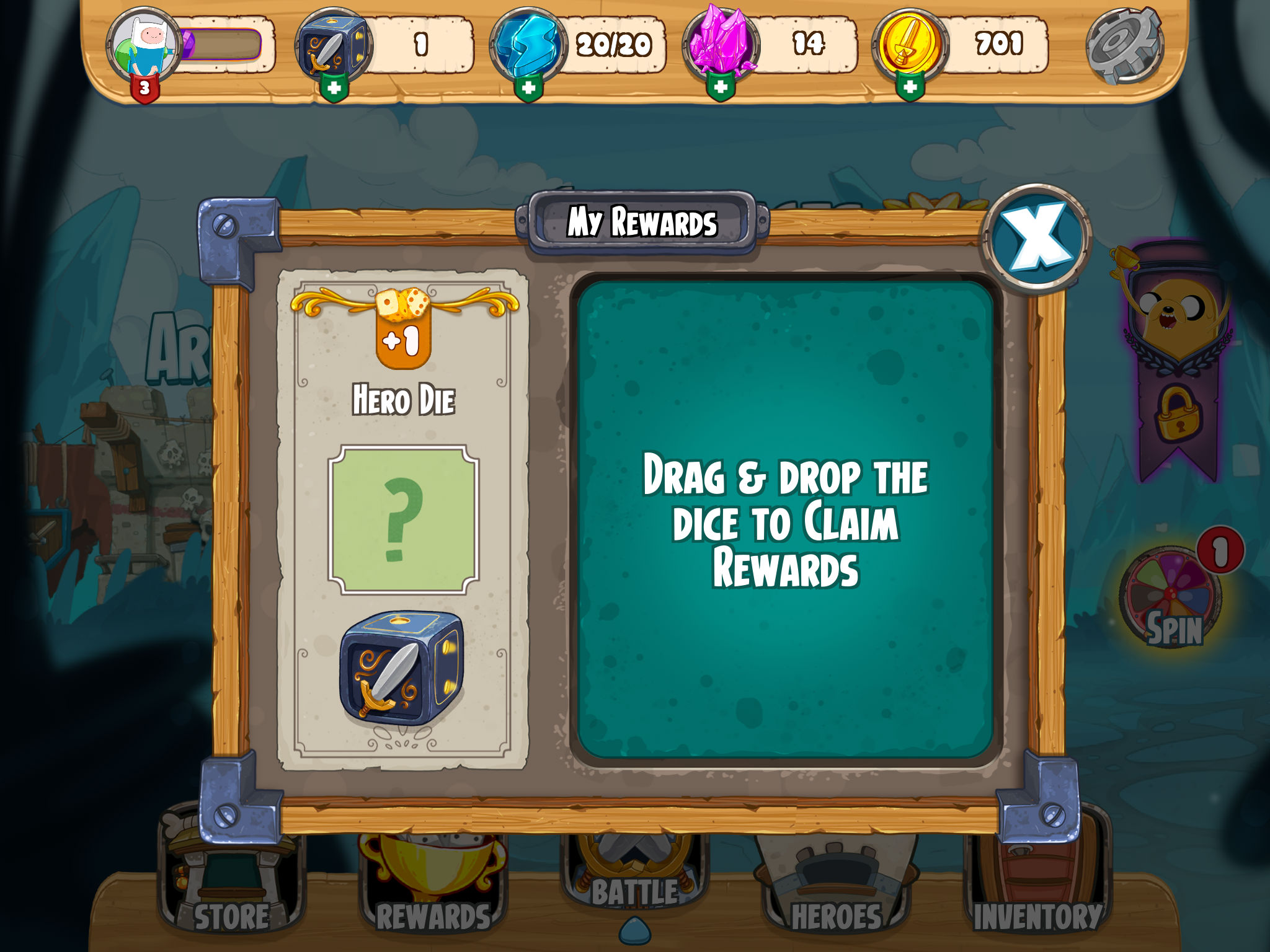 Since you’re fighting the Dice Lord in Champions and Challengers – Adventure Time, you might get the idea that dice are against you. Happily, that’s not actually the case.

Dice are the primary reward system in the game, perhaps a meta-commentary of some sort on the part of the developers at the random nature of loot in most mobile games these days. There are a bunch of different kinds of dice, some of which you’ll win as rewards and others you can buy for either coins (the standard currency) or gems (premium currency).

Once you have some dice, you can tap on ‘My Dice’ from the ‘Rewards’ screen or the dice icon at the top of the main navigation to roll them bones and see what you get. Possible rewards include coins, tricks (single-use items), artifacts (items that give your characters permanent boosts), tokens and cards (which we’ll get to in just a sec, promise) and coins. Most dice also grant a chance of unlocking a new character.

Bonus Tip: Every 24 hours, you’ll earn a special die that will guarantee you a character, though not necessarily one you don’t already have. Be sure to log in daily.

Of Tokens and Cards 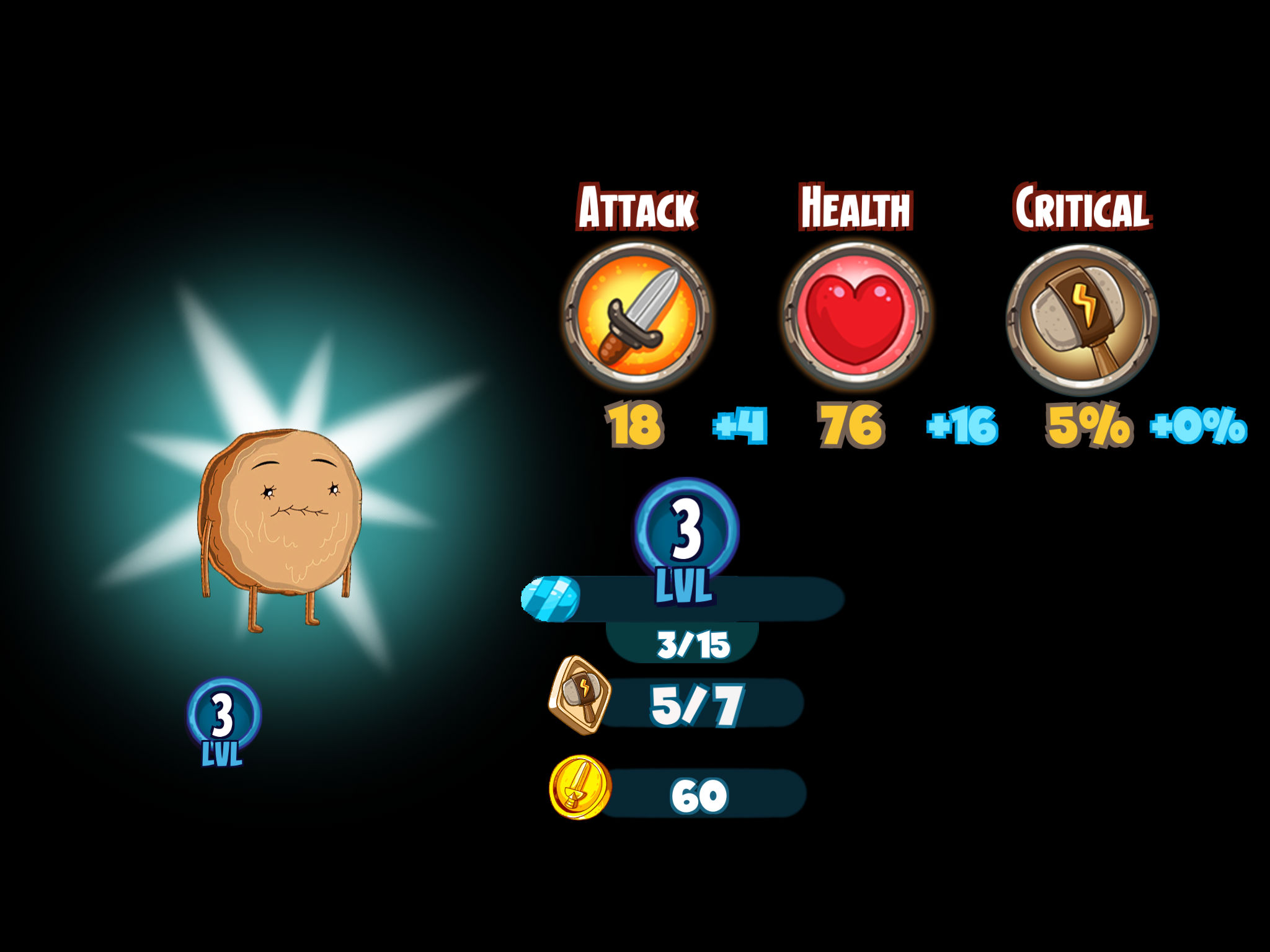 One of the big strengths of Adventure Time is its colorful and expansive cast of characters, and it’s awesome that more than 70 of them can be found in Champions and Challengers. Still, you’ll need quality to go with that quantity, meaning it’s helpful to know how to improve the characters you already own.

Happily, characters can be both trained and upgraded. To train a character, you’ll need a certain amount of tokens from his or her class (i.e. Might Tokens for a Might character like Finn) as well as coins. Then simply hit the ‘Train’ button to bump him or her up to the next level, with a corresponding increase in the Attack, Health and Critical stats.

To upgrade a character, you’ll need that character’s cards plus a certain number of gems. Bumping up character Rank in this manner can help unlock new abilities as well as make them tougher overall.

While the upgrade opportunities are obvious when you acquire certain cards, it’s not always as clear how to spend tokens that could be used on multiple characters. Try and concentrate on the ones you use most often to get the most benefit from your tokens.