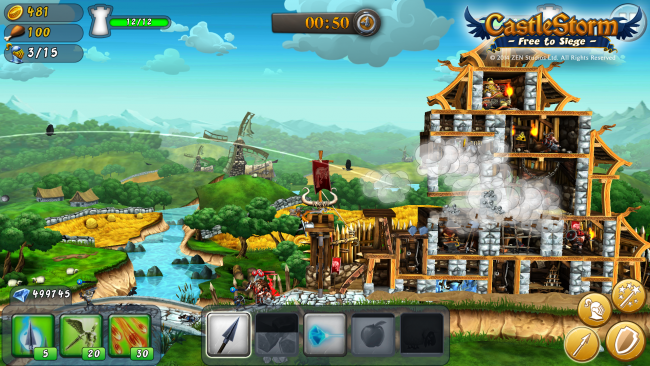 CastleStorm is a medieval tower defense game with shooting, troop management and even beat ’em up elements all rolled together in one package. Gamezebo’s walkthrough will provide you with tips on how to juggle all of those things and still keep your castle in one piece.

Your ballista is your friend – Though you’ll need to master multiple skills to succeed at CastleStorm, shooting with the ballista is probably the most important. You need to be able to shoot both quickly and accurately, as many levels are timed and some also require a certain hit percentage. Don’t be afraid to zoom in so you can go for headshots.

Don’t sweat it if you don’t get all three stars on a given level – It’s pretty easy to pass most levels, but a lot more challenging to get all three stars, especially the first time through, Concentrate on simply succeeding, as you can always go back and replay older levels to get the additional stars.

Spend on power-ups only after you see what’s next – It’s pretty tempting to spend gold to power-up your ballista, troops or spells as soon as you get it. But because you’re often banned from using one of those three resources in any given level, it makes sense to see what you’re up against first. The game will prompt you if you have enough gold to spend to improve something you need before heading into battle, so there’s no need to worry about forgetting. 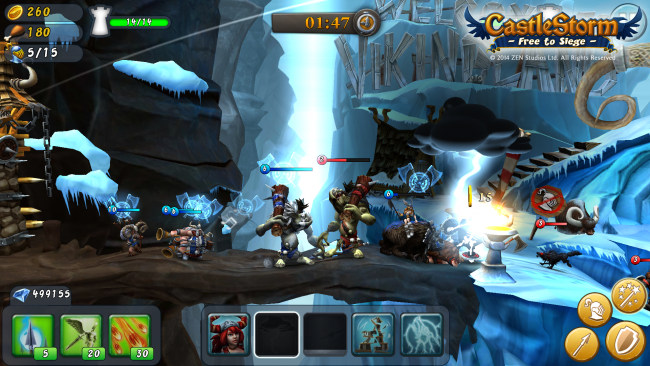 Summon Sir Gareth only when necessary – You’ll soon learn that Sir Gareth is way more effective at taking out enemy ground forces than your troops, mostly because you control him yourself. Sadly, he only sticks around for a limited time when summoned, so save him for when things get most desperate — like when the enemy has your flag — or when you need to make a final push toward the opposing castle.

Troops are expendable, but not unlimited – It’s really easy in the heat of battle to start pumping out troops as soon as you’ve got enough food to do so and to repeat every time you get below your maximum troop limit. What you might not know is that there’s a maximum number of each kind of troop you can use in each battle. You’ll know when you’ve hit it because the troop picture is replaced by a skull and you can’t summon any more. Keep that in mind.

Know your ammo – Firing javelins is fun, but you can hurl them all day against stone structures in the barbarian castle and they won’t do much. Of the projectiles you’ll have available early on, the javelin and javelin burst are for use on troops, while the morningstar and tri-stone can be used on troops or structures — though you’ll often want to save them for the latter since they take more time to recharge. 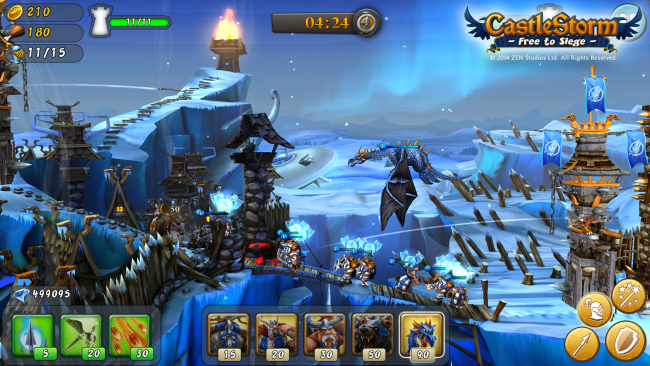 There’s nothing friendly about friendly fire – There’s nothing your foot soldiers hate more than when they get hit in the back by their own ballista (as evidenced by the mock swearing they do when it happens). Fire on the enemies only until they get within melee range of your troops, then switch to different targets farther away to avoid killing your own men.

Use boosters only when necessary – You’ll earn some boosters through the course of regular gameplay, and they can come in really handy. However they can only be purchased using gems, the game’s premium currency, which you can only get by buying them with real money. With that in mind, it makes sense to save boosters for levels you can’t figure out how to beat any other way.

Any real money purchase will get rid of the ads – CastleStorm asks you often if you want to purchase VIP status. There are some very nice benefits that come with that, including the elimination of the in-game ads. But if that’s all you want, you can also pay just to remove them, or buy any amount of gems and the ads will go away too.