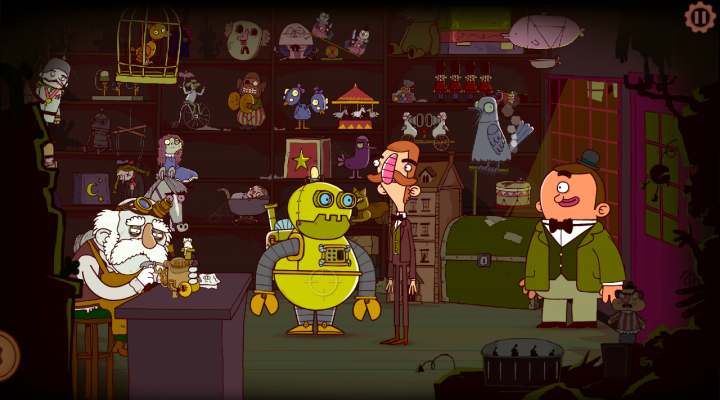 In chapter 3 of Bertram Fiddle Episode 2, A Bleaker Predicklement, Bertram has escaped from jail with Gavin’s help only to fall into another mess of trouble as he tries to escape. Your goal in this chapter is to get to the train to get out of town, but as usual, you’ll have to go a roundabout way to get there.

Remember, if you’re ever stuck, you can press and hold to see all interactable things. You can also double tap an exit to make your controlled character run to it instead of their usual slow plod.

If you’re stuck on one of the previous chapters, click below for our guides: 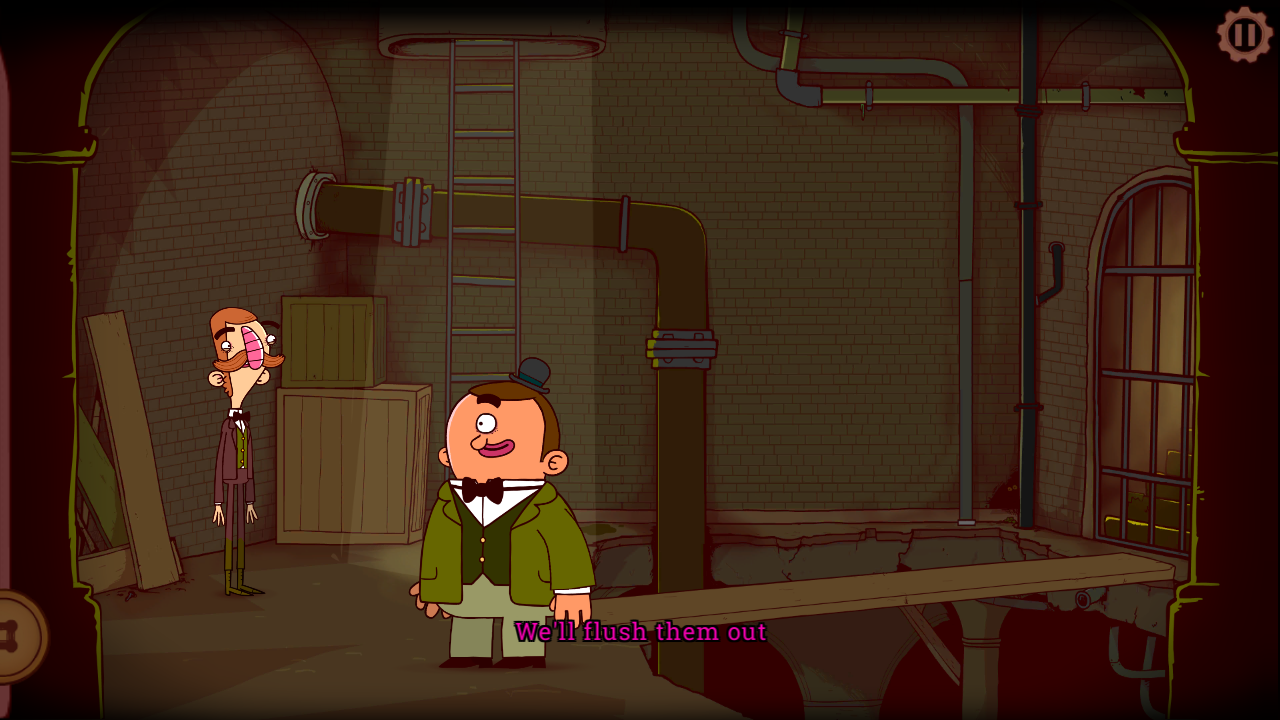 Begin by attempting to cross the plank. You’ll fall, just as Gavin predicted. 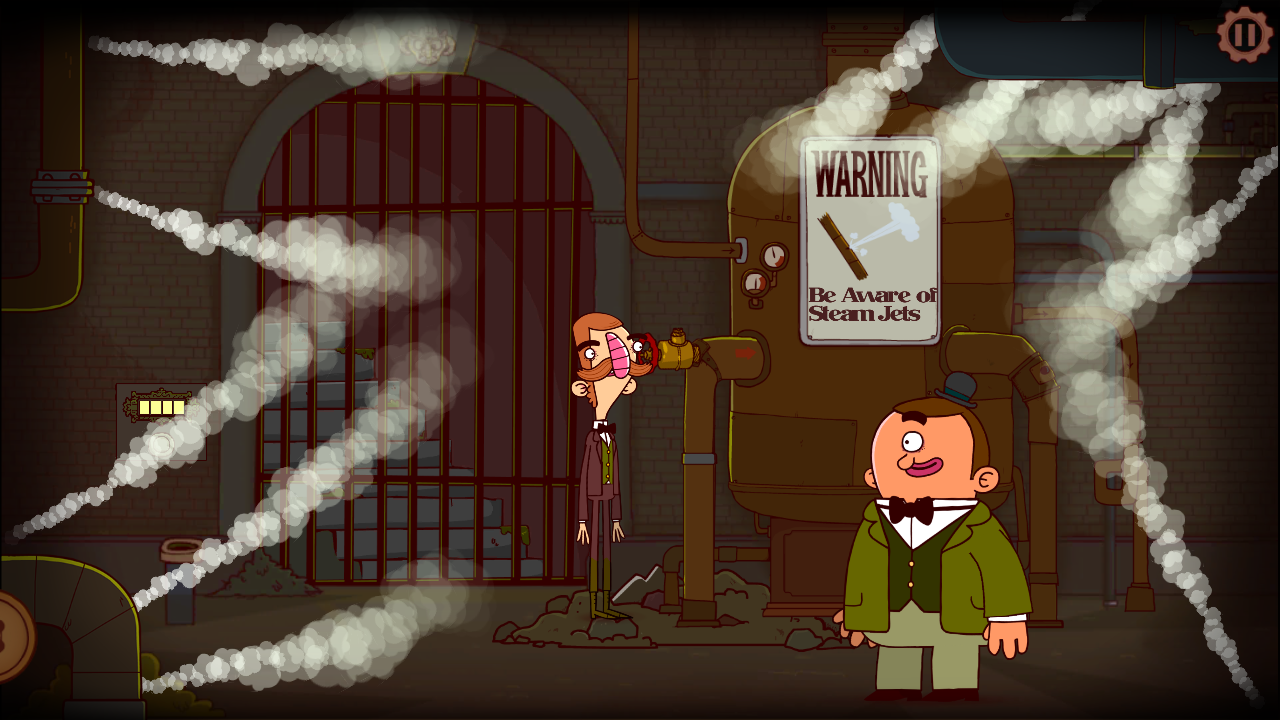 Remove the pipe valve on the right hand side of the boiler and place it in the hole on the left to reveal a bunch of steam jets. Their numbers are the key to the combination lock blocking your way, in the order that they turn on: 2, 5, 1, 3. Enter that and continue.

The sewer maze is fairly complex, so follow these instructions carefully. I’ve numbered the doors from left to right for each row. So the top left door is Top-1, and the bottom right door is Bottom-4. I did not include exit doors in this.

Pick up the slime, then go back the way you came to return to Gavin. Use the slime on the rusty wheel, then ask Gavin to turn it, which will shut off the green sludge over Bottom-2. Then, enter the doors in order: 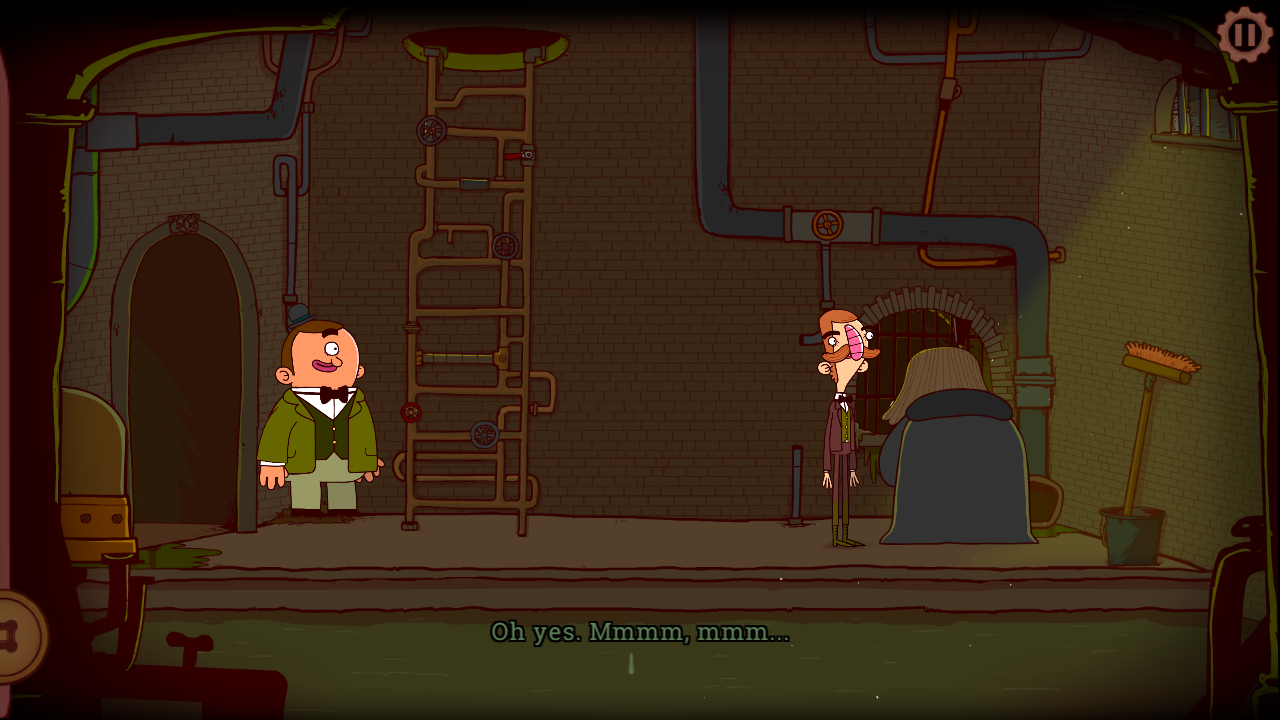 Speak with Count Fulchmuckle, then exit up the ladder and speak with Lord Arthwipe to get disguises. Collect the Monkey’s Paw before you leave. Having a drink is optional. 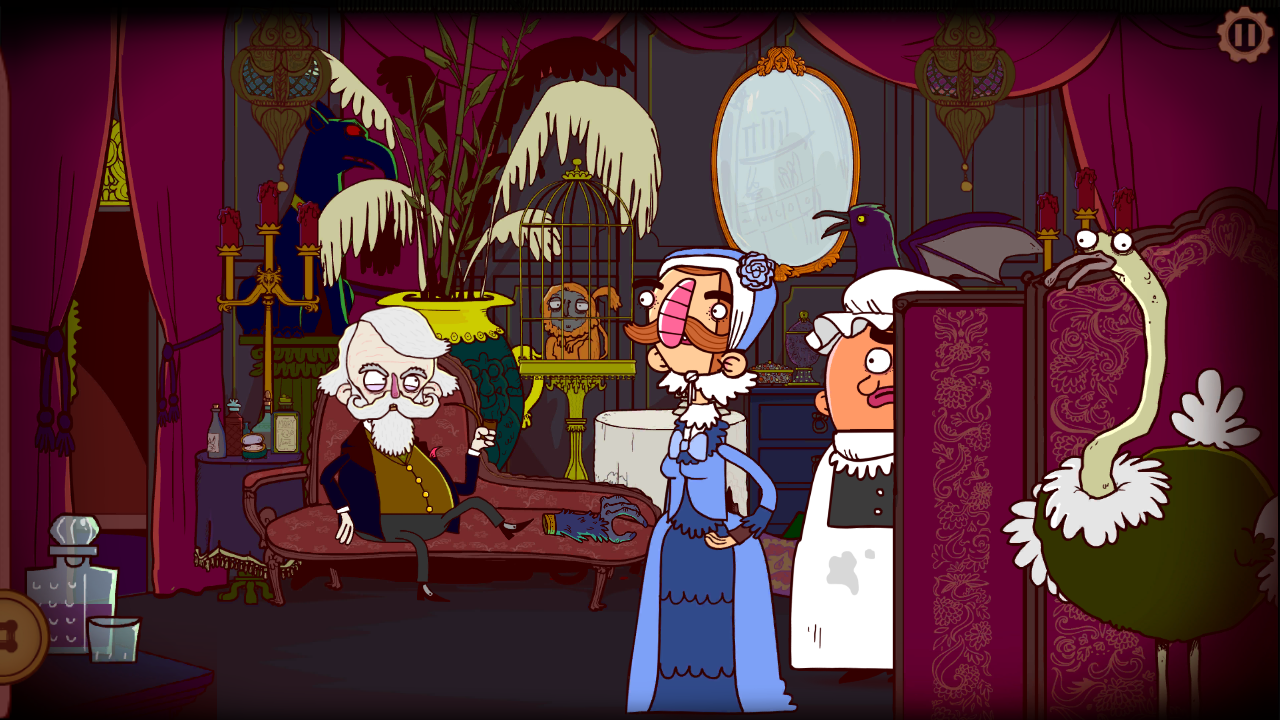 Arthwipe wanted you to go to the train station, but we’re not ready for that yet. Head left and visit the Adventurer’s Club first. Use the monkey’s paw on the wheel in the center of the square to receive a cogwheel, then head back to the right. Remember where the Manporium is, from Chapter 2? That’s where we’re headed. 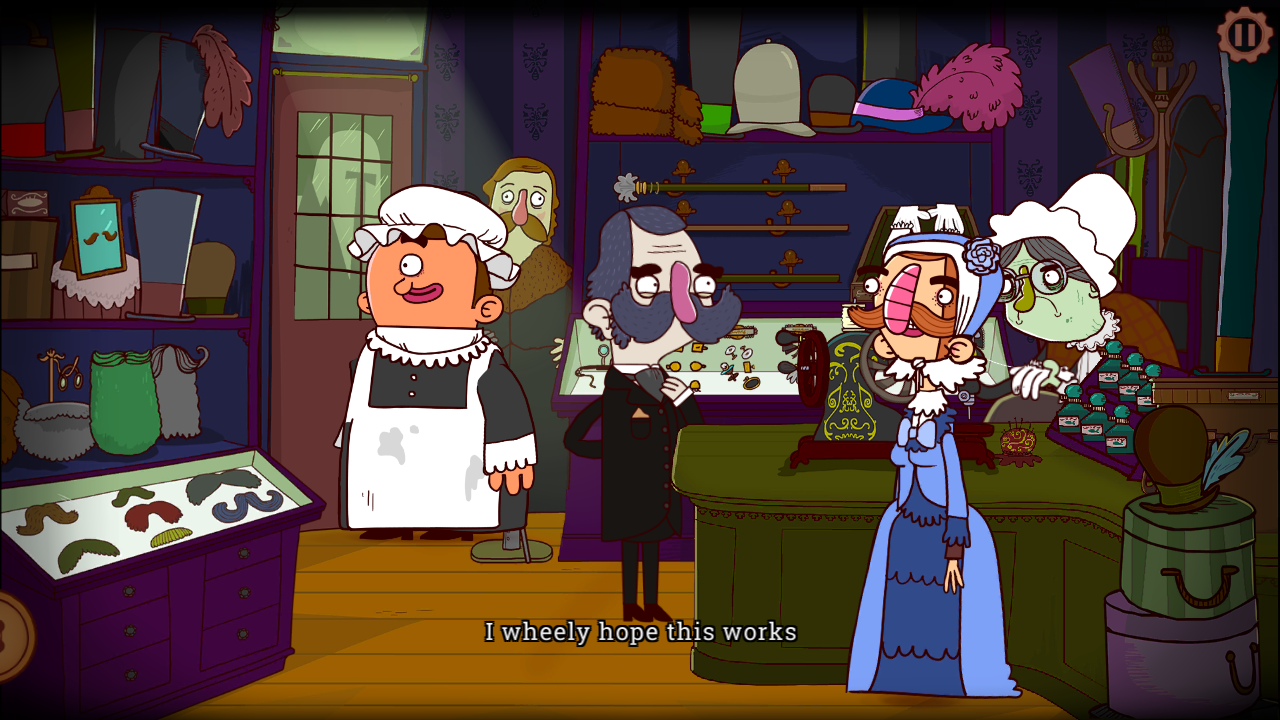 Use the cogwheel on the sewing machine to get the man to collect his gloves and leave. Now he’ll push the orange cart from earlier out of the way so you can head through the tunnel. 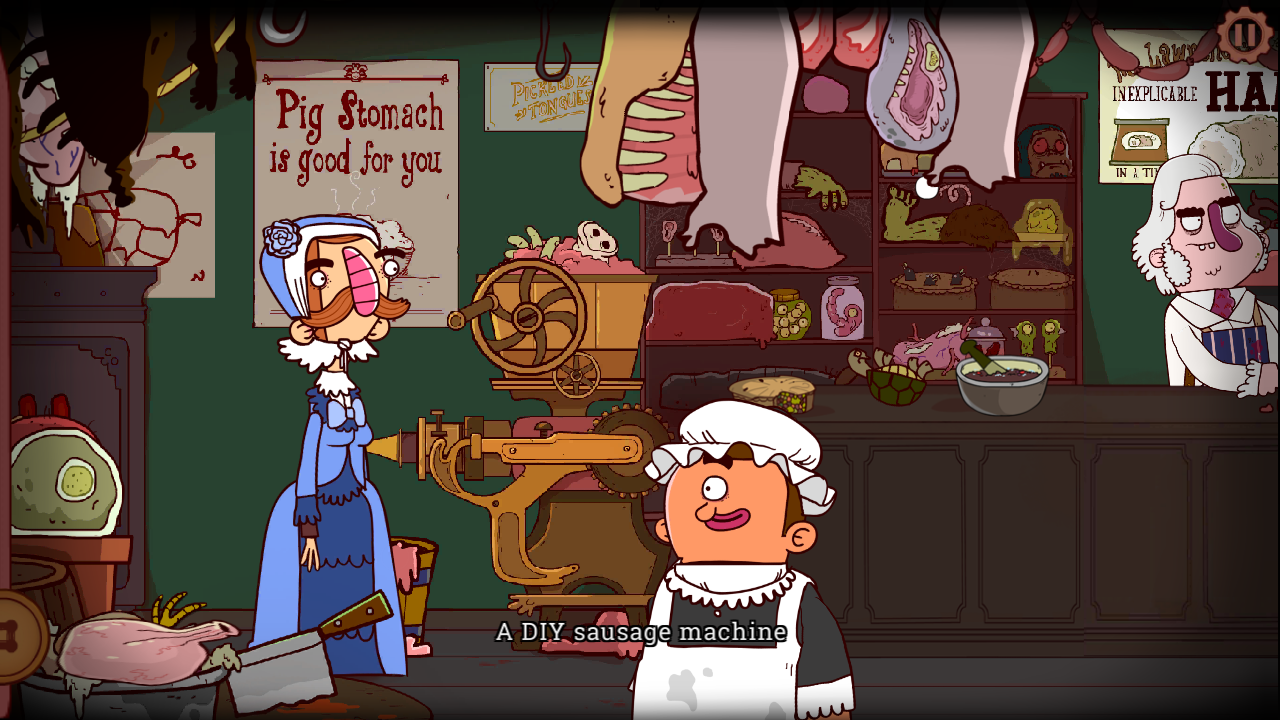 Enter the Butcharium and head to the far left. Use the DIY sausage machine to make your own sausage, then collect the donkey bladder (the weird pink sac) from the bottom left corner. Head out of the store and watch the scene as you do. 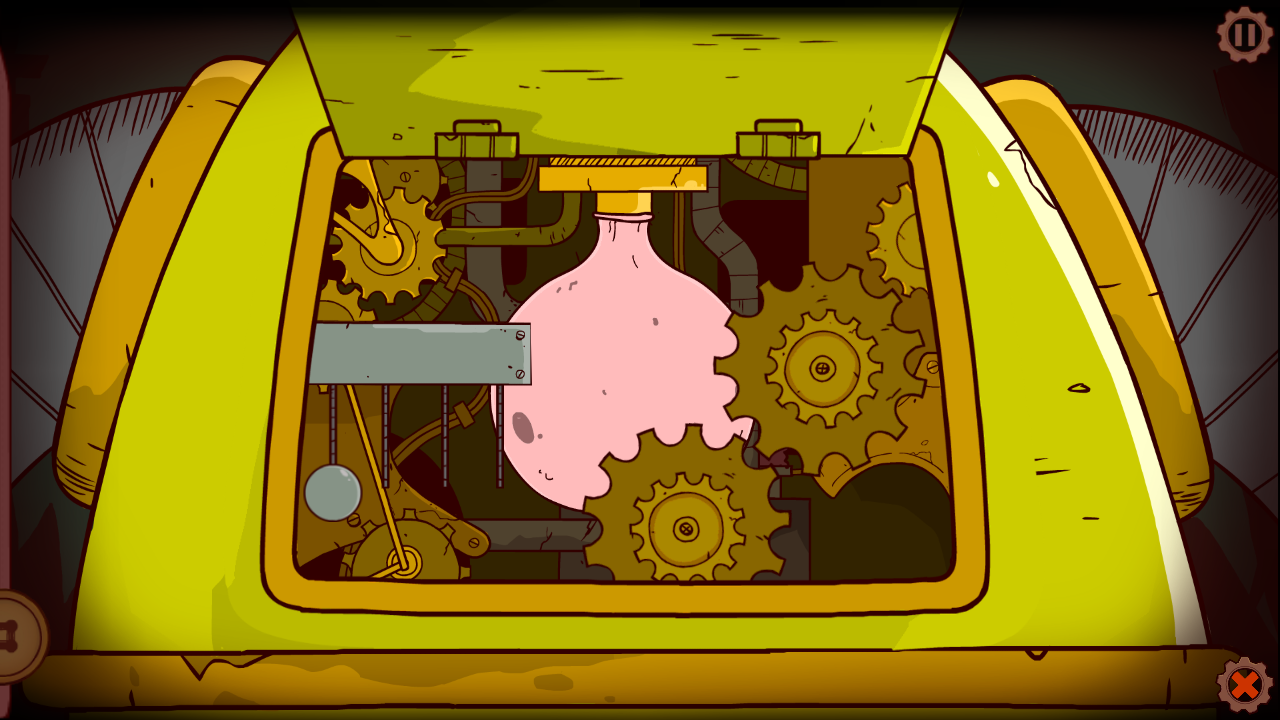 Head to the far right and pick up the cog on the ground before entering the Mechanical Toys shop. Ask Gavin to pick up the robot arm on the ground, then to attach it to the robot. You’ll have to examine it twice to get a look at its insides, then you can attach the cog on the right and the donkey bladder up top. You’re still missing one piece, so head out for now and down the alleyway in the center. 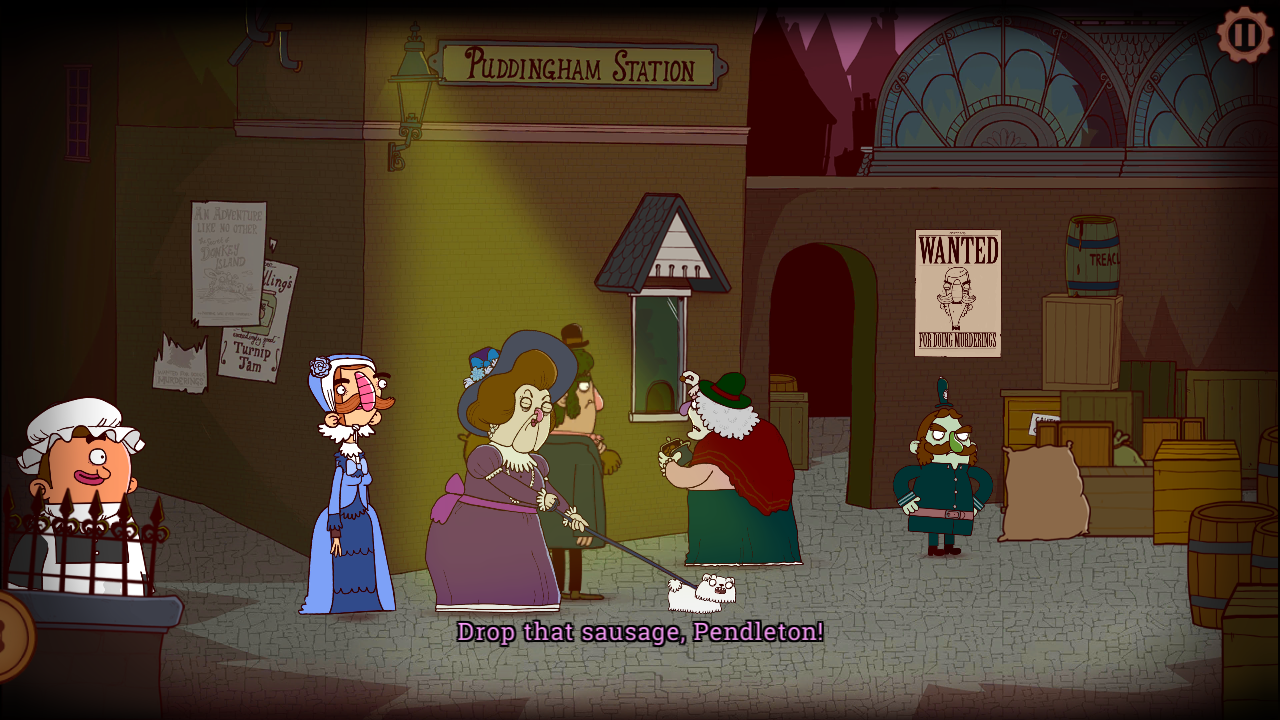 Give the sausage to the dog in the arms of the woman, then take the hat pin once it starts pulling. You’re near the train station, but we’re still not ready to go there yet. Turn around and head back to the candy store, the one shop on the last screen you haven’t been to yet. 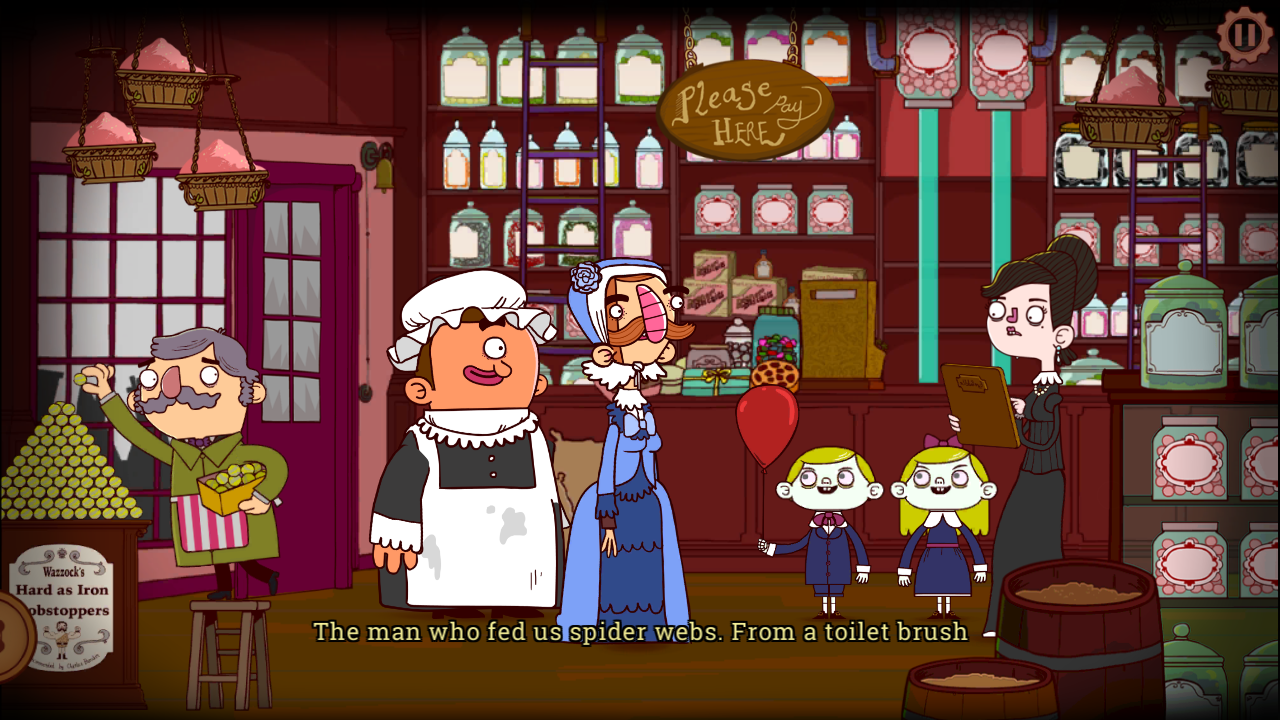 Inside the candy shop, you’ll find the twins from the previous episode. After a short conversation with them, use the pin to pop their balloon. The man will drop his candies, so pick all three up once the twins disappear. Time to go back to the toy shop and finish the robot! 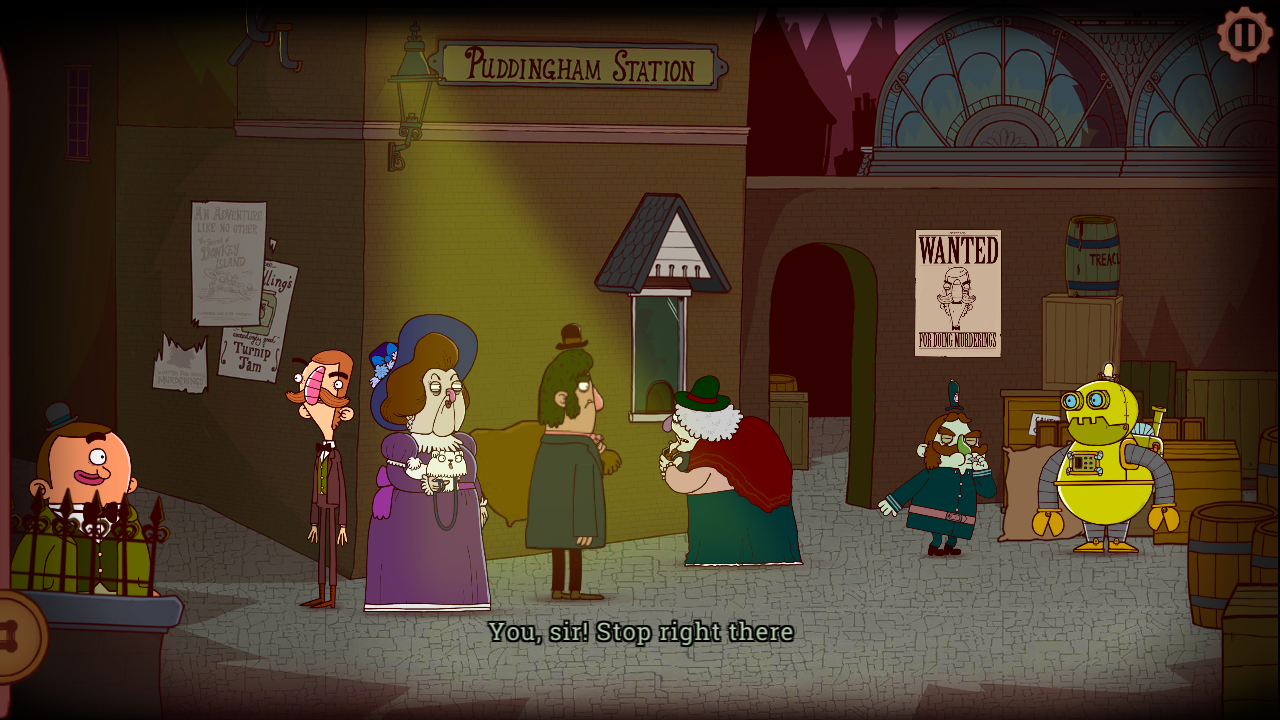 Put the balls into the remaining spot on the left and the robot will activate. Tap on him and usher him out the door, then guide him in the direction of the train station. Follow him. Once at the train station, direct your new robot friend to knock over the top barrel on the stack near the policeman. Now you can pass through and board the train, ending the chapter!