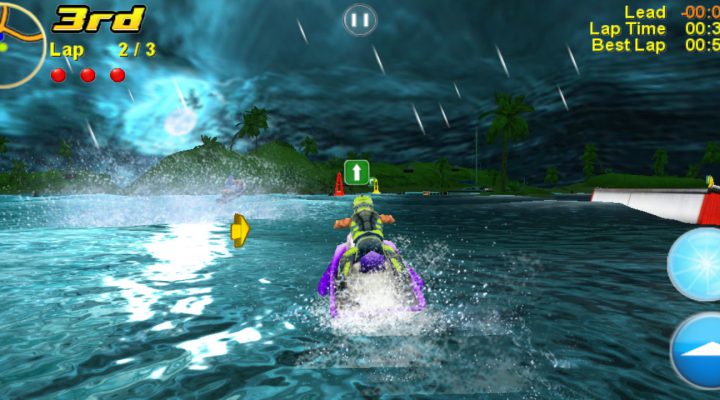 Aqua Moto Racing 2 is out now on Android, but it can be tricky to get a handle on – at least at first. Let us be your guide to conquering the title’s trickiest waves.

There are two main modes in Aqua Moto Racing 2: Career and Single Race. Tracks in the latter are unlocked when you successfully complete them in the former.

Single races, accessible via the crossed flags icon in the main menu, are what they sound like: individual races with no bearing on your general progress through the game. However, they can be useful for working towards achievements. It’s much easier to concentrate on, e.g., pulling off every stunt in a single race if you don’t care about winning.

You can view your achievements in the section marked with a gold riband in the main menu.

The Career is where you’ll do the bulk of your racing, however — particularly at first — so we’ll concentrate on that. You can find it in the main menu behind the trophy icon.

Once you’ve chosen your preferred control style, all that remains is to race.

If you pass any of these buoys on the wrong side, you’ll get a penalty. If you get three penalties, you’re disqualified.

If you pass them on the right side however you’ll get a little top up for your boost meter. The closer you pass, the more you get. When your boost meter is full, you can tap the blue icon on the bottom right to activate your boost. It’s best to do this on a straight or when heading for a ramp.

Around each track are littered bags and chests full of money. Drive over these to collect them. You can also earn money for doing stunts. More on those shortly.

The watercraft have a variety of stats: Top speed, acceleration, steering, stunt, and turbo. These are not modifiable. You can choose a model that suits your style, but in general a more powerful watercraft will be better irrespective of its balance of attributes, so it makes sense to race with the most expensive one in your garage.

During a race, whenever you hit a ramp you’ll get a choice of stunts to execute. There are six in all: Indian Air, Cordova (both easy), No Hands, Tsunami (both medium), Backflip, and Body Varial (both hard.)

A hard stunt is one that requires longer in the air, so if you hit a ramp while going slow or you find yourself in mid air before remembering to pull a stunt, best go for an easy one. Conversely, if you have enough hang time you can pull off a combo, doing one stunt after the other.

While going over ramps and pulling off stunts is a good way of earning cash, it can actually slow you down. If you’re feeling flush, or you’re in a tight race, it’s sometimes a good idea to give the ramps a wide berth and let your opponents show off while you quietly slip in front.

If you’ve got the rank for a shiny new watercraft but not the money, you can earn more by doing single races on tracks you’ve already unlocked. The beauty of this approach is that you don’t need to win because you’ve already won – you can just devote your energy to collecting cash. Heck, you don’t even have to finish the race!

You can use these tips for yourself by checking out Aqua Moto Racing 2 on Android now – in both Premium and Free iterations.