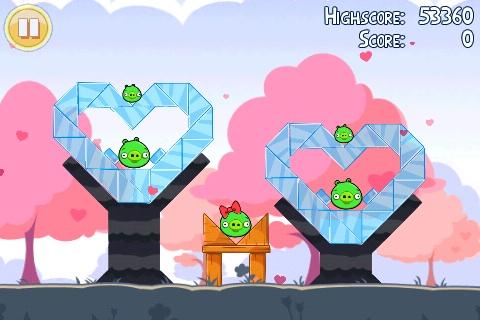 Angry Birds Seasons is an iPhone game developed by Rovio that has you firing different types of birds at blocks in order to eliminate pigs, all with a holiday theme. Gamezebo’s Angry Birds Seasons strategy guide and walkthrough will provide you with tips and tricks, hints and cheats so that you can get through all 15 levels of the Hogs and Kisses portion of the game.

In this stage there are five pigs to clear. Four of them are located in glass hearts — with two in each heart — and the fifth is in between. The easiest strategy for this stage is death from above: that is, firing your birds almost straight up, but a little to the left, so that they will land on top of the hearts. You should tap the bird a moment after it starts its downward arc. 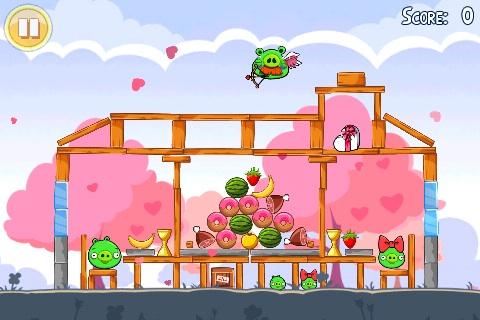 This stage, too, has five pigs, with four located inside of a rickety wooden structure and one flying above it. Use your first bird to take out the flying cupid piggy, then use your second, explosive bird to destroy the wood structure by aiming it at the leftmost wall. Your third bird will be used like a bowling ball to clear away the pigs that are now on the ground. If there’s anything left you can use the final bird to pick it off. 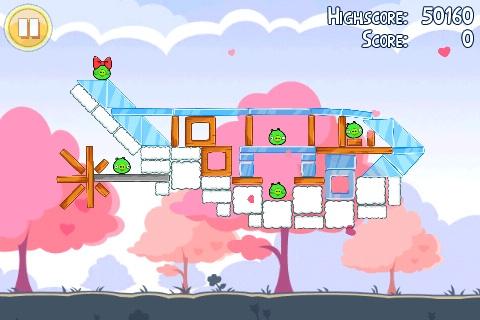 The five pigs in this level are perched precariously on a ship made of wood, ice, and clouds. The trick is to not focus on the pigs, but instead the snow that holds them up. Fire all of your birds with the intention of clearing away the clouds at the bottom of the structure, which will in turn make it come crashing to the ground, eliminating the pigs. 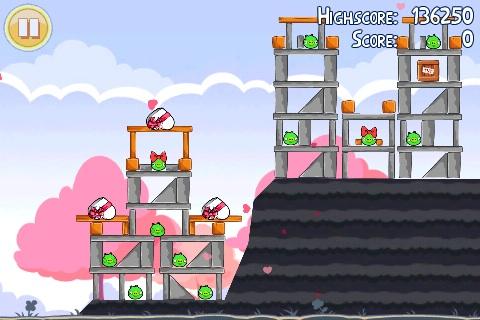 When you’re armed with exploding bird bombs, everything is easier. In this stage all you really need to do is make sure your birds get lodged inside of the stone and wood structures. To do this, aim either at the bottom or middle of the structures. Start with the left most one, which should only take one bird to destroy, and then use two to take down the structure on the right. 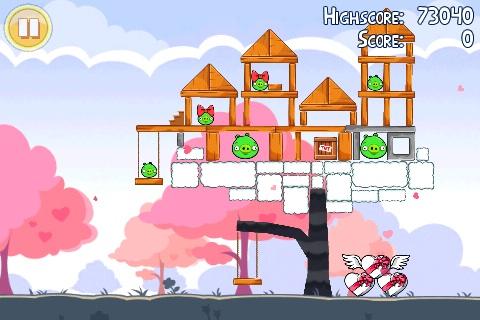 The strategy for this level is much the same as the previous: take out the clouds. To start, fire your bouncing white bird just below the structure and then tap it so that it bounces up and clears away some of the clouds. From there, use your remaining three birds to take down the teetering structure and make it collapse. 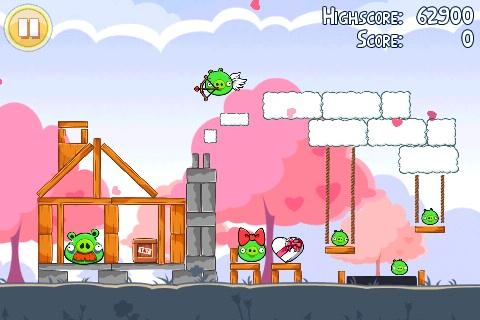 With your first two birds take down the house on the left. The first bird should take down the first wall, allowing you to hit the explosive box with the second. This will cause the chimney to fall, hitting the pig in a bow. Use the third bird to nail the floating cupid pig, and the fourth and final bird to land on the platform on the ground on the far right. Once it explodes it will clear away the rest of the pigs. 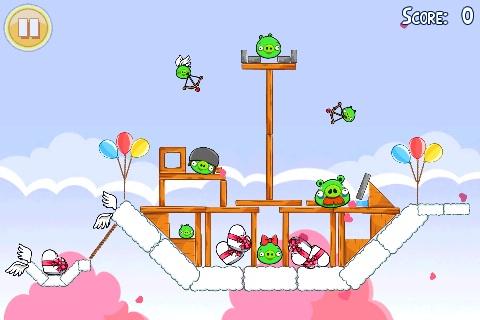 Use your first bird to hit the corner or the structure (the block with wings and balloons attached to it) to help weaken it. Then fire your second bird straight through the middle of the tall, standing stick, which will cause the whole structure to come tumbling down. Use your remaining birds to pick off the two tiny floating pigs. 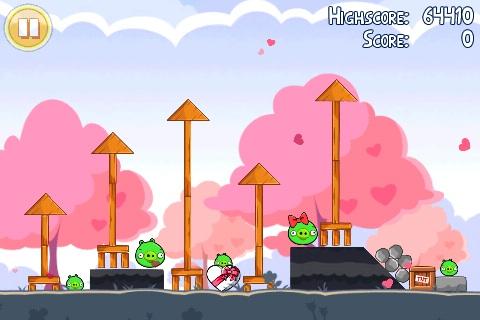 It’s actually possible to complete this stage with just one bird. Hit the first standing structure at the very top, knocking off the triangle, and this will cause a chain reaction causing everything else to fall down as well. 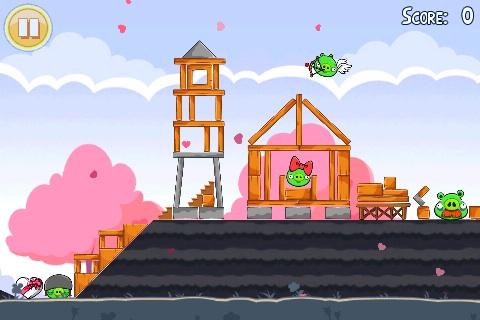 This one requires a tricky first shot. If you time it right, it’s possible to fire your first bird in an arc so that it will take out both the floating cupid pig and the right most pig on the ground. After that, use the second bird to knock down the tower by firing it straight and then tapping it at the last second. Use the third bird to get rid of the pig in the house by firing it straight into the air so that it lands directly on the roof of the house. You may need to use the fourth bird for this, as well. 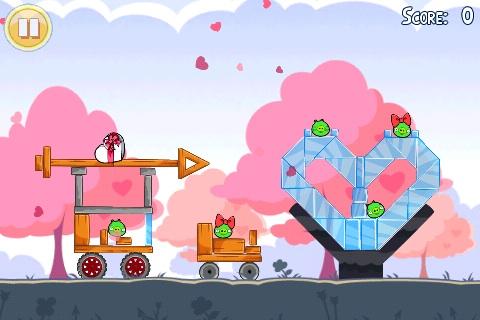 Aim for the concrete block on the first wheeled structure with your first shot, which will push it into the other. Use your next shot to clear away the two pigs on top of the glass heart, and your final bird (or two) to get rid of the pig inside. 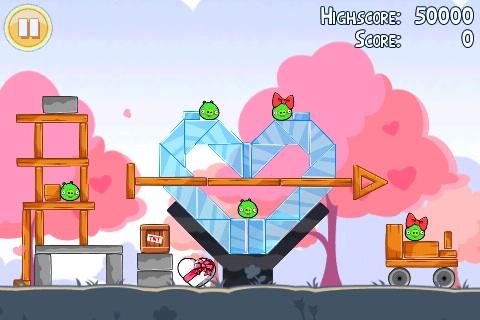 With your first shot, fire the bird high into the air creating an arc that will take out the two pigs wearing bows on the far right. Use the second shot to clear away the other pig on top of the glass heart. The third shot should be almost completely straight to the right, which will knock over the tower and cause the explosive box to blow up, clearing away the rest of the pigs. 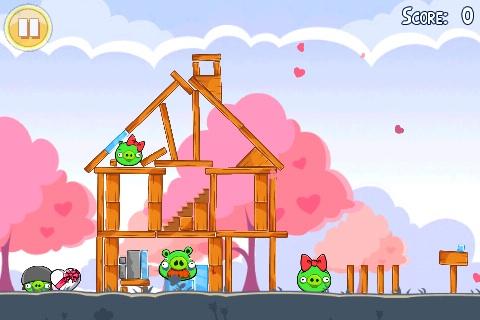 The first shot should be aimed on a slightly downward slope so that you can take out the helmet wearing pig in one shot. Then fire the next bird in an arc over the house, and tap it on its way down so that it will boomerang back and take out the bottom of the house. This should leave you with just one pig left in the middle of the screen, which you can clear by firing your third bird almost straight into the air so that it will land on top of the pig. 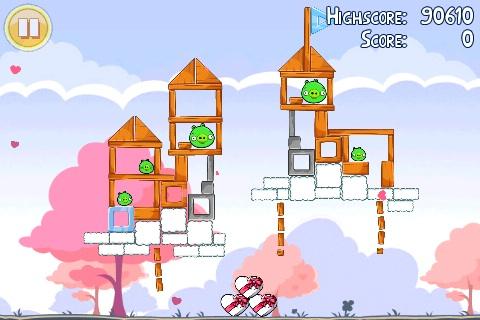 The key here, again, is to eliminate the clouds that are holding all of the wood structures up. To start, fire your first bird at the silver box on the left side to weaken it. Then hit it again with your second bird, which should smash through it and take down the whole left side. Then, simply fire your next two shots at the clouds on the right side and watch the pigs come tumbling down. 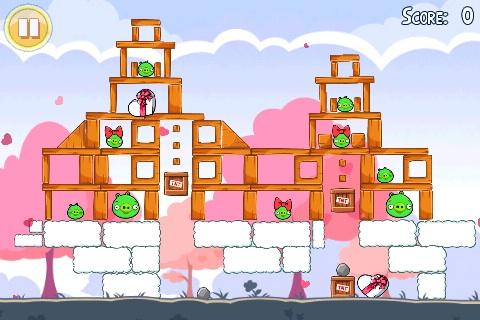 Your first shot needs to hit the wood block that’s right in front of the box of candies. This will set off a chain reaction that will see the right side structure blown to bits. Then all you need to do is use your remaining birds to topple what clouds remain on the left side. 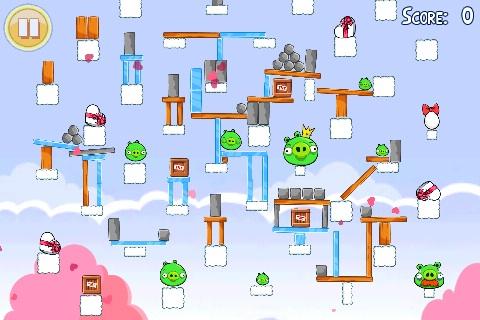 There’s no specific way to solve the final level, but there’s one important thing to keep in mind. Whereas previous levels had you focusing on clearing out the bottom clouds, this level requires you to focus on the top. Clearing away clouds on the top will cause things to fall down and explode, clearing away pigs. So fire away! 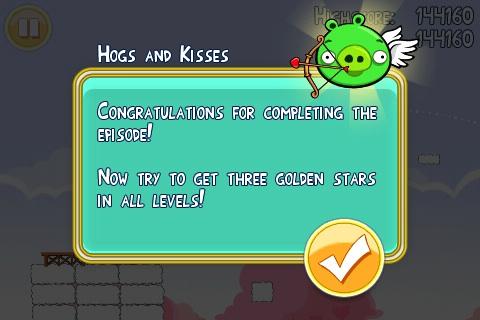 You’ve completed the Angry Birds Seasons Hogs and Kisses walkthrough for the iPhone, iPad and iPod Touch. Now you’ll have no problem eliminating all of those nasty green pigs. Be sure to keep checking back with Gamezebo for our extensive coverage with reviews, previews, guides and more.

Think you have a better solution for a level than we do? Be sure to share it with everyone in our User Tips section!