Home / Features / A multiplayer guide to Might & Magic: Elemental Guardians: the PvP Arena and Guilds 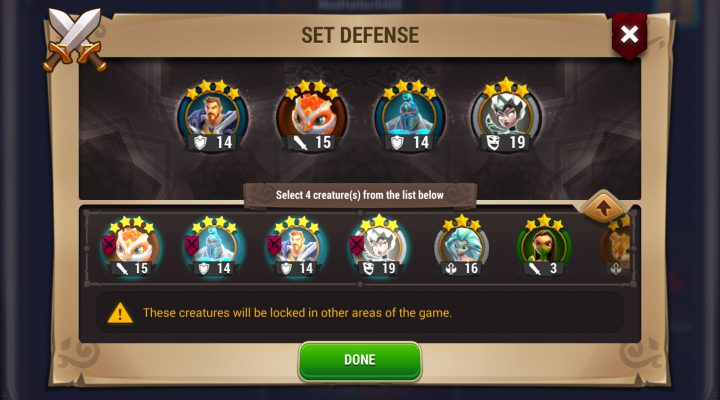 Might & Magic: Elemental Guardians – Ubisoft’s latest successful foray into the world of mobile – is a single-player game, with plenty to do for unsociable types. However, multiplayer is clearly where the game’s heart is.

There are two different kinds of multiplayer in Elemental Guardians: PvP, which takes place in the Arena, and Guild. This guide will take you through both types and more, giving you a solid grounding in the arts of destroying and cooperating with other humans.

How to master the PvP Arena

The Arena is located on the main screen, on an island to the left of the big island in the middle. It has a colosseum-type structure on it, plus a blue blazing torch. 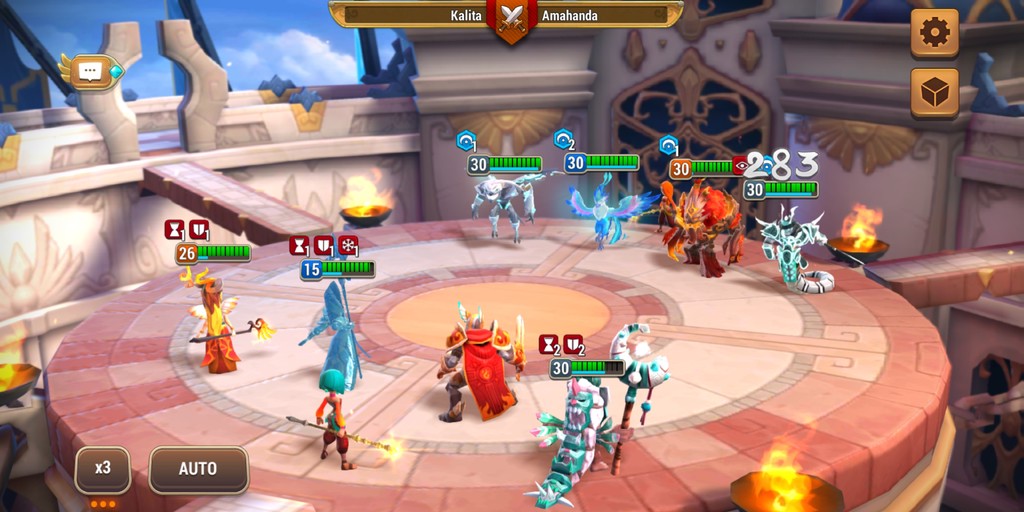 Tap on this island and you’ll enter the Arena, which is where the game’s asynchronous PvP multiplayer action is located. Arena matches involve pitting your team of creatures against your opponent’s team of monsters in 4v4 battles.

If you’re the attacker, you control your creatures directly. But if you’re defending, the AI controls your creatures for you and you generally don’t even know the match is happening.

To set yourself up for these AI battles you need to visit the Your Defense tab, which you can find on the left of the screen. Tap on Set and you’ll be able to choose four creatures from your collection to fill your defense team. These are the creatures your enemies will meet whenever they attack you. 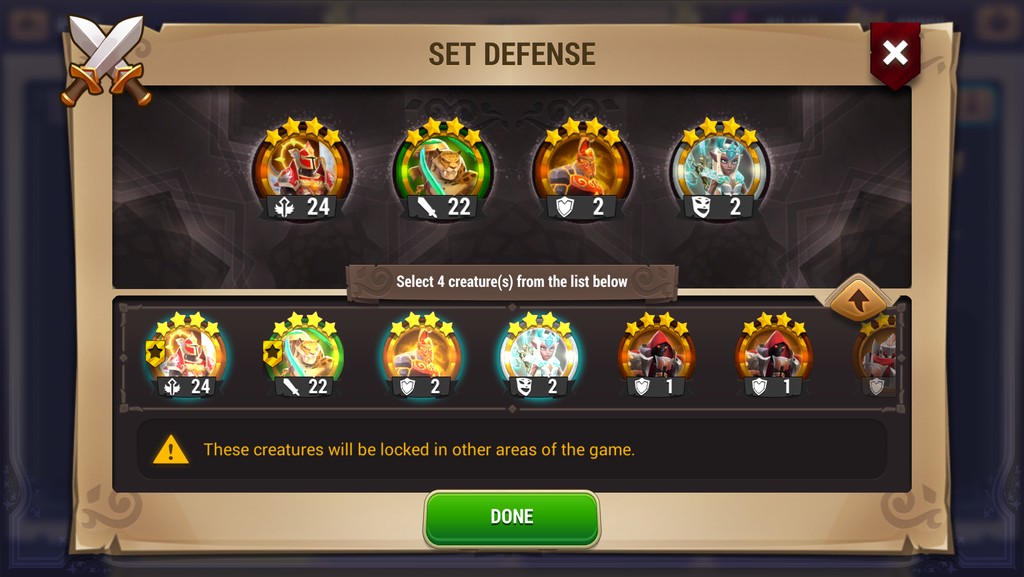 It can be difficult to know how to set up this team. The pressure is on to choose your creatures wisely since you won’t be there to help them in battle.

Your first temptation will probably be to recruit your most powerful immovable tank-like creatures — the ones who can absorb the most damage. But in reality you should approach your defense team exactly as you approach your attack team, aiming to achieve a balance of different abilities and elements so that you can withstand the whole spectrum of enemy types.

All that remains before you head into battle is to familiarize yourself with a couple of features at the bottom of the screen.

First, the Leagues tab. Tapping on this lets you see the leaderboard for the league you’re currently competing in alongside as many as 99 other players. Leagues take a week to play out, and each battle earns (or costs) you Ranking Points. You can play as many battles as you want, but the overall aim is obviously to climb the rankings. 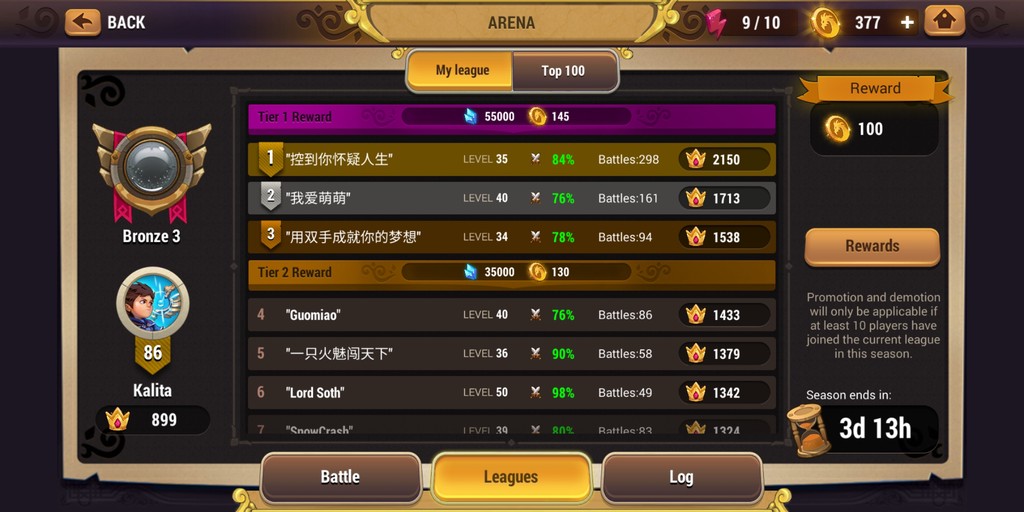 Your final placement is all-important. If you end up in the top 10%, you’ll be promoted to the next league up for the following week, which gives you better rewards. You can also rise through the tiers in your own league.

Second, the Log tab. This just tells you who your last ten defending matches were against, and who won. The key feature here is the Challenge button, which lets you immediately drag any opponent who beat you back into the Arena for some vengeance.

Tip: As we all know, war is expensive. Every time you launch an attack you lose a unit of Arena Energy, which is different from normal energy and in much shorter supply. Fortunately, you can find free Arena Energy in chests, so make sure you rummage through all of them.

After hitting Start to commence battle, you’ll first get a chance to review your opponent. If you don’t fancy going ten rounds with them, you can skip to the next potential opponent by tapping View Next. However, you can only do this five times before a 30-minute timer kicks in, so don’t be too fussy.

Otherwise, the fighting works exactly the same as it does in any other solo Shattered Islands level. This is covered in another guide.

At the end of every match you’ll get a rundown of the Ranking Points you’ve won (or lost) and the the rewards you’ve earned (or not.)

Tip: Some battles are a foregone conclusion. You can save yourself the trouble of playing these by tapping the Auto button in the bottom-left of the screen. And you can accelerate them, too, by tapping the other button twice.

Just keep an eye on what’s happening on the screen, as you may want to jump back in if you’re not happy with the choices your AI Napoleon is making on your behalf. 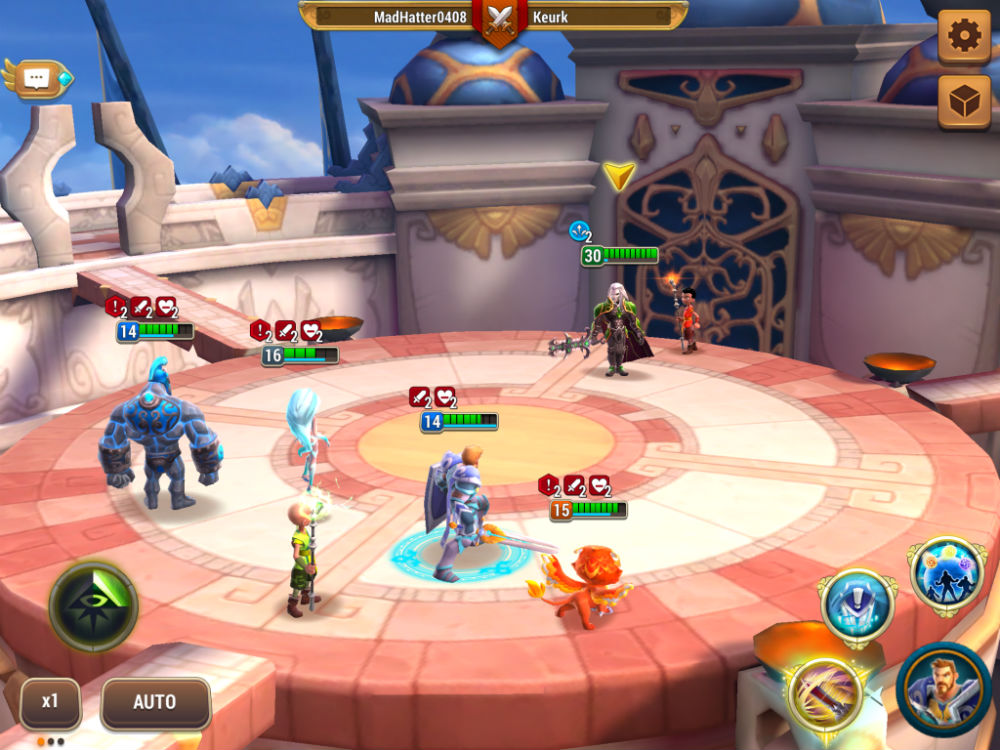 Also, before we move on from the Arena, bear in mind that you can add a dimension to Elemental Guardians by playing in AR. Just tap the cube icon.

How to join or make a Guild

Taking on real humans in PvP matches is a blast, but nothing beats the warm glow of cooperative gameplay. Fortunately, Might & Magic: Elemental Guardians allows you to experience this glow — and earn exclusive rewards — by joining a Guild.

Here’s how. First, tap the Search button. You’ll be presented with a list of Guilds who are in search of new members. From here you’ll be able to see each Guild’s level, the conditions new applicants need to satisfy (more on that later), and the amount of stuff new members will be expected to do. 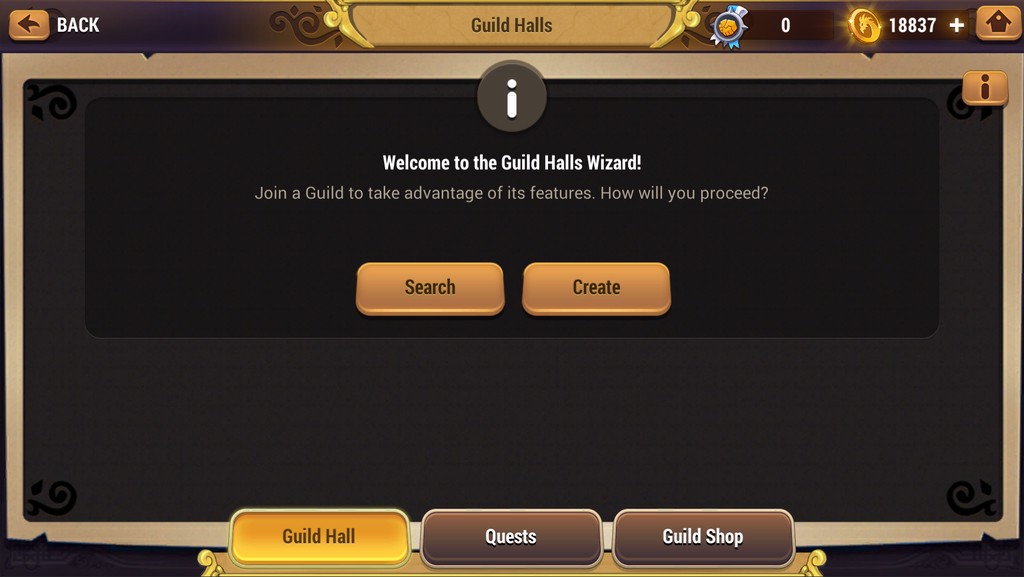 If none of the Guilds available seems like the right fit for you, why not create a new Guild of your very own? You can do this by tapping the Create button, whereupon you’ll be asked to name your Guild, provide a short description, and set the conditions of entry.

The final step you need to take when creating a league is to pay the fee of 30 Seals. But why would you bother? What’s so great about being in a Guild? So many things.

Firstly, there’s the community. It’s just fun to share your experience with like-minded players from around the world.

Secondly, there are concrete perks in the form of Quests that you can only tackle as part of a Guild, yielding rewards that aren’t available to non-Guild members.

Thirdly, being in a Guild will set you up nicely for raids. These aren’t currently part of Elemental Guardians, but it’s widely assumed that they will be one day, so it’s a good idea to hit the ground running.

That just about wraps it up for this guide on Elemental Guardians’s PvP and Guild-based gameplay. Take a look at our beginners’ guide for more useful tips.

Use all these tips in the game yourself by downloading Might & Magic: Elemental Guardians via Google Play and the App Store now.

Pokemon Quest recipe list: All the ingredients you need for every recipe

How to master PvP in Dragon Ball Legends