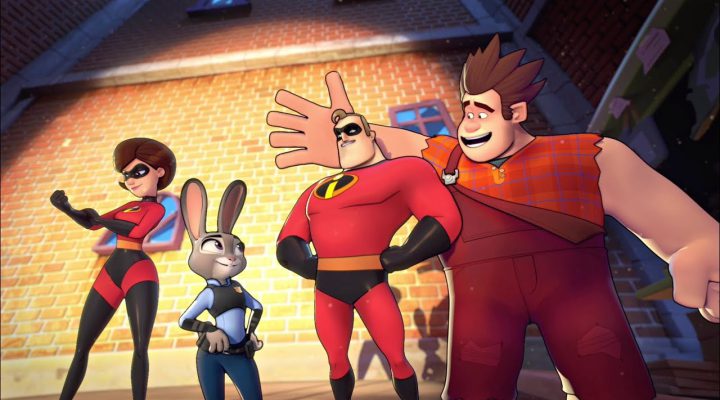 Rain, rain, go away, come back another day. It’s been miserably wet here on the east coast of the U.S. for most of the past week, with no relief in sight until Sunday or Monday. It’s almost enough to make one too bummed out to play any new mobile games.

We said almost. In actuality, the umbrella weather is the perfect excuse to hit the app stores in search of something new. That’s a routine we get into weekly, and every Friday, we report back on the most promising things that weren’t there before.

This week’s crop of new mobile games includes Disney heroes banding together to fight under your control, a side-scrolling shooter that might take its place among the titans of the past, and several other fun newcomers. We can’t guarantee they’re all great since we haven’t had time to play them all yet, but they sure look like they might be, so let’s check them all out now. No poncho needed.

From the “this was probably inevitable” file comes Disney Heroes, which has beloved characters from animated films like The Incredibles, Wreck-It Ralph and Monsters Inc. and teams them together in 5v5 battles. If you’ve got Star Wars: Galaxy of Heroes in mind, you’re on the right track, though this game is even simpler to play and should appeal to even younger mobile gamers as a result. Hard to imagine it won’t be among this week’s most downloaded new titles.

This isn’t the first go-round for this game, but it’s the first time we’ve seen it for iOS devices. Super Hydorah is a side-scrolling space shooter, the kind that pits your lone craft and reflexes against hordes of enemies. Already lauded during its PC release, the mobile version has touch controls but also supports MFi controllers should you decide that’s the only way to fly.

You know those old-timey drawings of the body as if it was some kind of intricate machine? Homo Machina leans all the way into both that concept and that aesthetic, giving you a chance to assist the little people who control all your bodily functions as they get a person through his day and prepare for a romantic encounter at night. Along the way, it challenges you with all kinds of puzzles, so you’ll have to use your brain in a number of different ways.

There aren’t too many games billed as action gold miner simulations, which means this might always be number one in its genre of one. Diggerman sets you on the path to save your sweetheart from a huge, angry mole, digging your way through five different worlds to do so and avoiding any number of traps and obstacles along the way. Why is the mole so angry? We don’t know, but presumably the game addresses that at some point.

Like you, we generally recoil in horror and start screaming at the thought of too much math. Yet math can also be your friend, as it appears to be in this “B-Movie Puzzle Game.” Your professor was right on the verge of revealing a mathematical cure for cancer (just go with it) when she was murdered. Now you have to solve her murder, rediscover the cure and more, all in a puzzle game that also has an ’80s action movie mentality, complete with actors actually reciting ridiculous dialogue with straight faces. Sounds just the right kind of nuts.

How to unlock Deadpool in Marvel Strike Force