Unless you’ve spent the last five years hiding under a rock, you’re almost certainly acquainted with a mobile strategy-RPG or two. But even if you aren’t, it’s easy to get up to speed with Might & Magic: Elemental Guardians, since Ubisoft has made the game as intuitive and accessible as possible.

The good news for you is that we’ve been there, making every blunder conceivable in the name of accidental research. As a result, we’ve been able to compile this handy list of 15 common errors to avoid in Elemental Guardians. 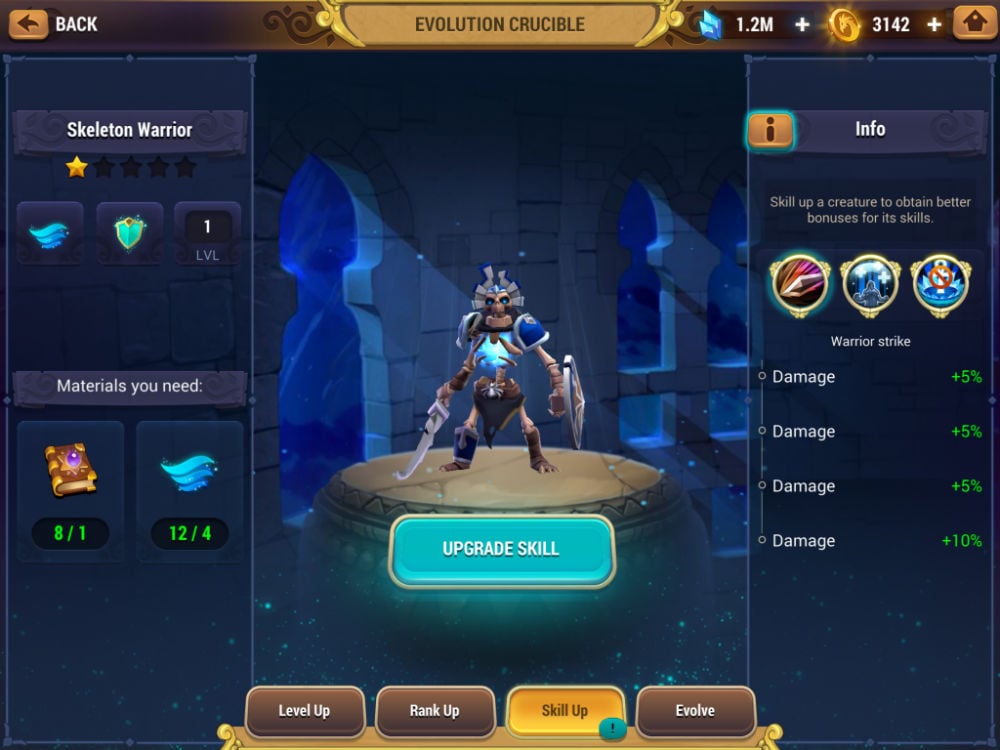 In principle, every single creature in Elemental Guardians has the potential to reach five stars with enough Magical Books, time, and effort. Indeed, that should be your ultimate aspiration for every creature you own.

Except 1-star creatures. These hopeless losers may have it in them to reach five stars, but what they lack is the ability to evolve. Since all of the best creatures are evolved ones, you should discard any nat 1 you acquire by feeding it to your other creatures.

It’s natural to lump 2-star creatures in with 1-star creatures at the bottom of the pile, but this fails to take into account their crucial distinguishing ability: evolution.

In fact, some of the very strongest creatures in the game start their lives as lowly 2-star creatures, two rungs down their own evolutionary ladders.

You can check on the potential of any nat 2 you acquire by consulting our Tier List.

Neglecting your free Seals and crystals

Elemental Guardians has a compelling gameplay loop, and it’s easy to overlook some of its more mundane tasks in your rush to jump into battle. You should stay on top of these, however, because they can mean free stuff.

Specifically, you get free resources every day just for logging in. On the main screen are two floating islands — Dragon Utopia and Crystal Mine — endlessly manufacturing free Seals and crystals. All you need to do is tap on them whenever you see a notification, which should happen every six to 12 hours. 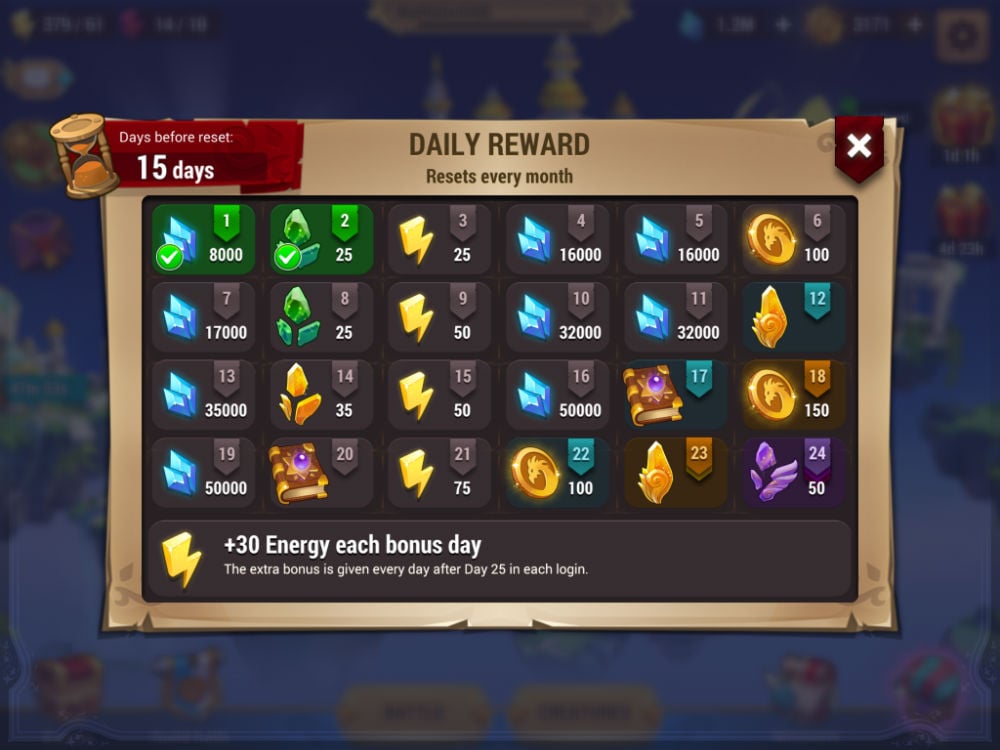 Tragically, life sometimes gets in the way of playing games. But even if you can’t fit in a proper session with Elemental Guardians, you should make the effort to log in.

Why? Because with every consecutive daily log in you advance your reward calendar, and the best rewards come to those who can rack up many consecutive days. These include Magical Books and Magical Soulstone Fragments – valuable items that you’d be mad to pass up for the minimal cost of just showing up for a few seconds.

It’s absolutely inevitable that you’ll have favourites in Elemental Guardians – creatures that seem to work for you and which become your mains, gaining power through repeated use and preferential upgrading.

Just don’t get too attached to these creatures. There are so many permutations of class and elemental affinity in Elemental Guardians that you need a wide spectrum of abilities to cope. If you’re up against a Fire boss, you need several decent Water creatures. And so on.

Use your mains by all means, but you also need to keep strategically fielding weaker creatures to build an army capable of dealing with every threat. 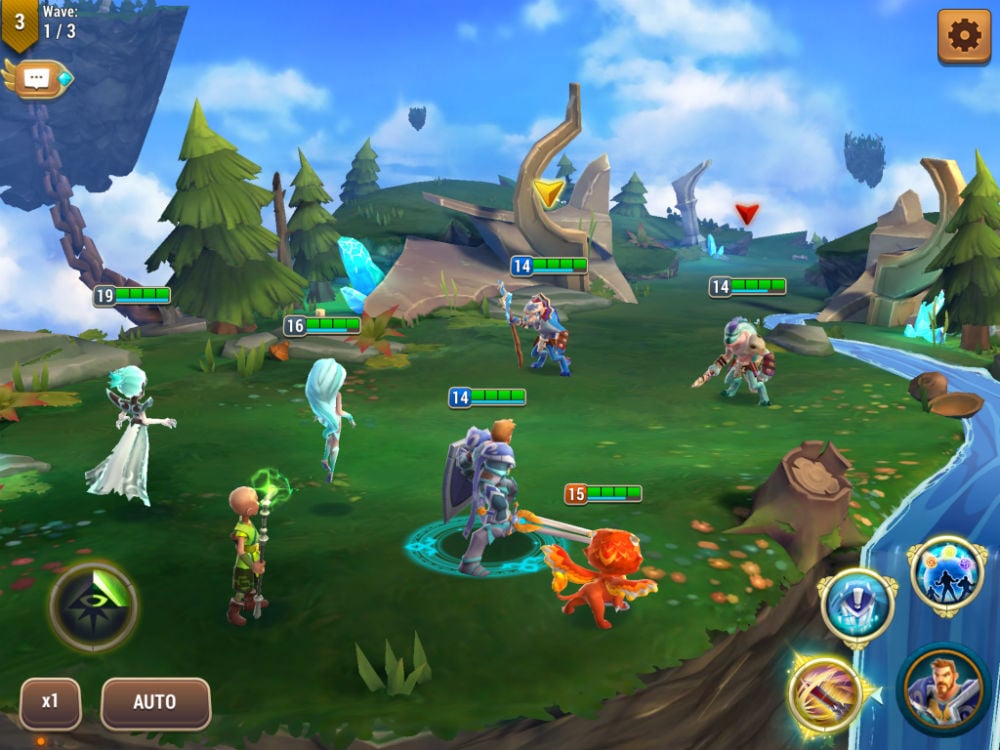 In a close fight, every attack and ability can mean the difference between success and failure. You need to use every single one wisely, and that means never attacking an enemy with a red arrow above its head.

A green arrow means the inverse, while a yellow arrow means the elemental effect will be neutral. You should never attack a red arrow enemy unless there are no other kinds of enemy on the screen. 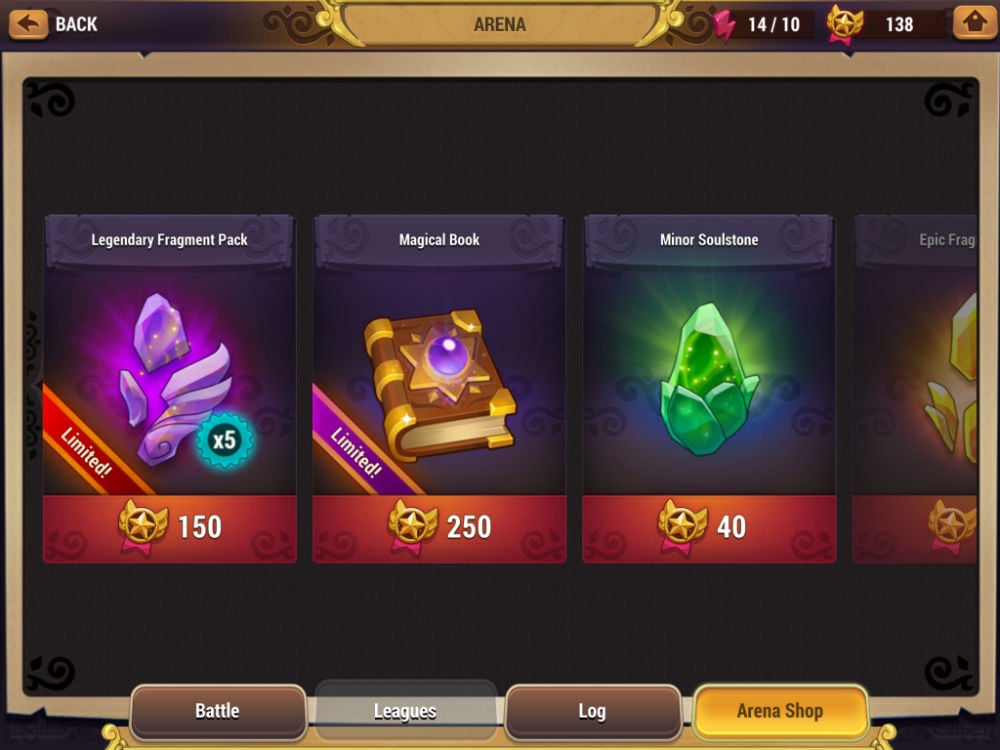 In the end, every single one of your creatures should have five stars. However, it’s important to bear in mind that a 5-star creature won’t necessarily fare very well in battle against a team that’s been levelled up.

This is most obvious in the Arena, where you’ll come across human opponents with teams that are low-ranking but levelled up. If your team is the opposite way, high-ranking but low level, you’ll find yourself overmatched every time. 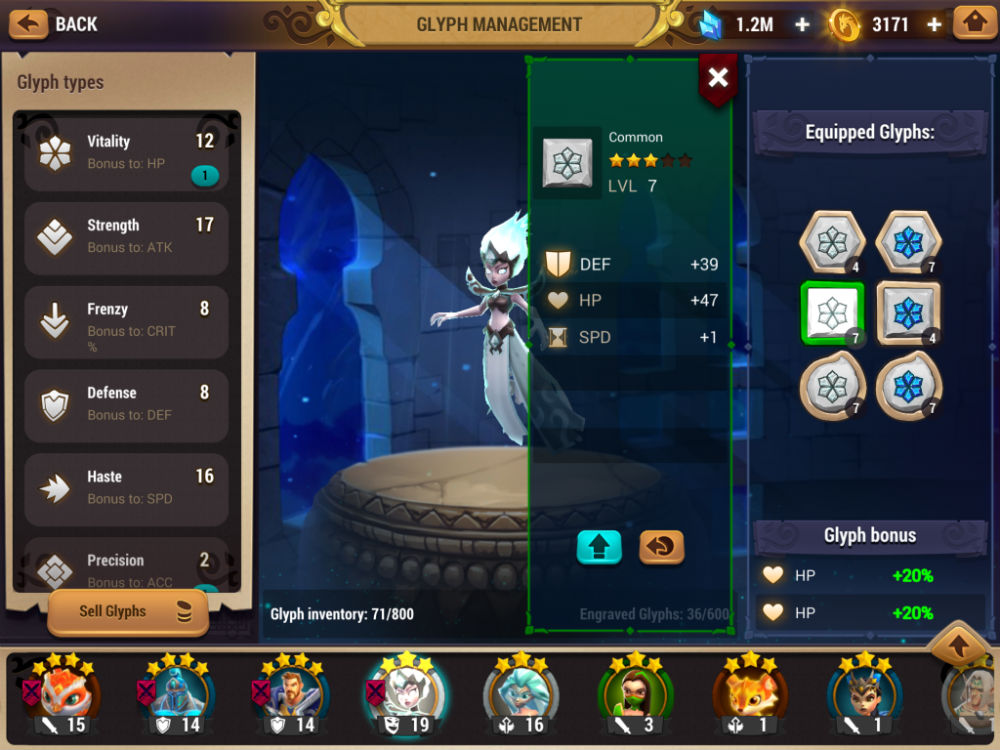 There’s no way to meaningfully rank glyphs, because they come in a huge variety of different forms, but we can impart a golden rule that you may have overlooked: it’s vitally important that you don’t mix your glyphs up.

Each creature can slot six glyphs at a time. While it might seem sensible to use one from each category to give you a full spectrum, you get a bonus for using multiple glyphs of the same kind. For instance, six Vitality glyphs equipped to a single creature will confer a 40% HP bonus, which is absolutely massive.

You’ll equip and un-equip numerous glyphs during your time with Elemental Guardians. As long as you remember the golden rule you’ll always get the best out of them.

Failing to understand glyphs in general 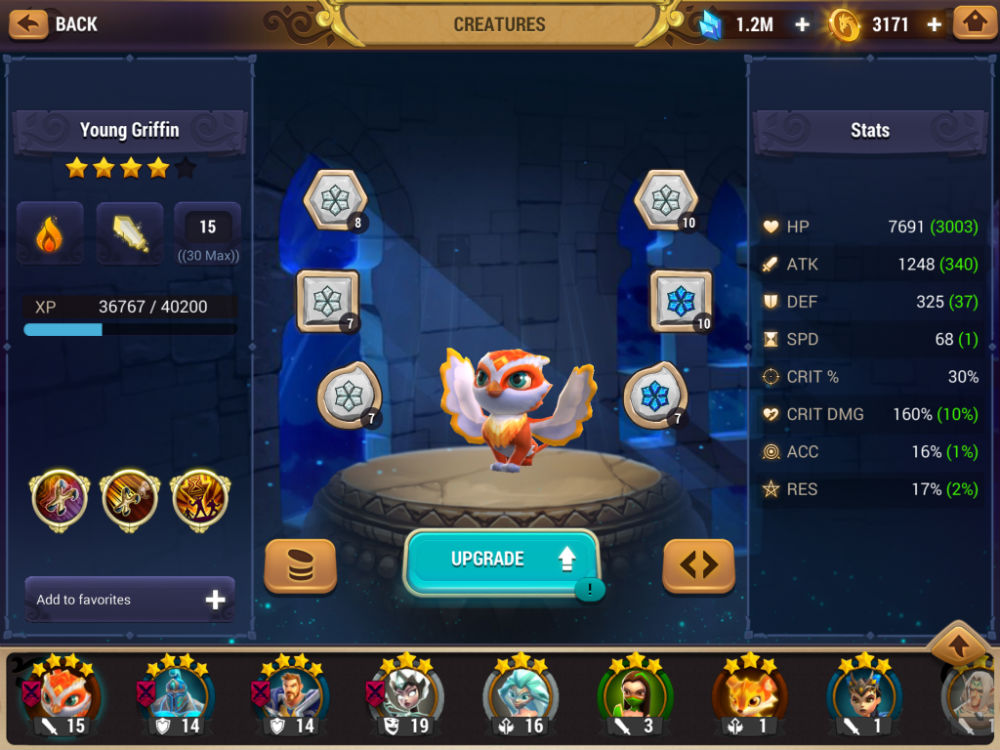 Of course, it’s easy to overlook glyphs altogether, since there are so many other ways to level and rank up your creatures. It’s important that you don’t, because the consensus in the Elemental Guardians community is that glyphs are crucial in maxing out a creature’s potential.

In particular, it’s important to remember that each glyph type confers its own set bonuses.

Spending your Seals and Soulstones rashly

In all probability, you’ll go straight to the Summoning Altar for an Epic Soulstone whenever you accrue the necessary 130 Seals. Likewise, you’ll open Soulstones the moment you get them. Why wouldn’t you?

Here’s why. In certain Elemental Guardians events you need to open Soulstones or spend resources like Seals in specific amounts. If you don’t have them, you’ll be unable to hit your event goals, so it’s always a good idea to have some resources in the bank.

Failing to expend energy before leveling up 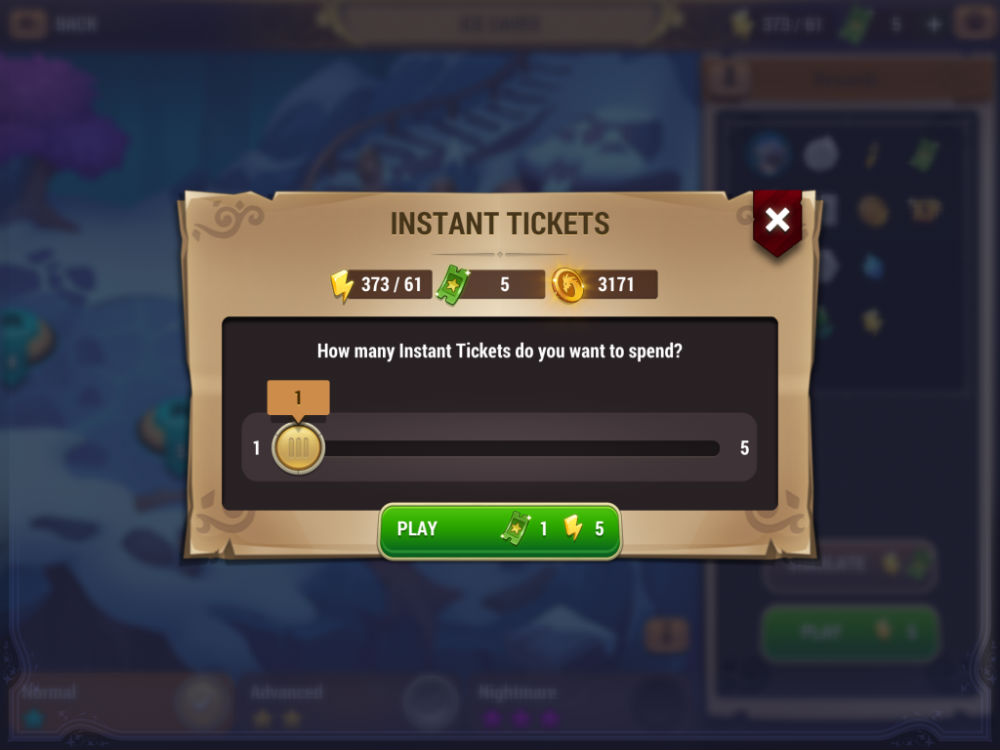 You may have noticed that whenever you level up you get a total energy refill. It’s a nice little perk, but if you already have full energy it doesn’t really help, right?

Wrong. If you’re about to level up and you have energy to spend, you’d be mad not to spend it. The easiest way to do this is to use Instant Tickets to simulate as many battles as you can. This costs you the same amount of energy as fighting battles manually, but in the blink of an eye. It’s basically free rewards.

Using up your abilities before the final wave of a battle

The most important aspect of mastering abilities is timing. Every ability — except base attack — is on a timer, with a cool down period preventing you from using it over and over.

If you’re just about to head into the final wave of enemies in a stage, where you’ll encounter super-tough monsters and bosses, the last thing you want is to blow your abilities beforehand, leaving you empty-handed at the worst possible moment. 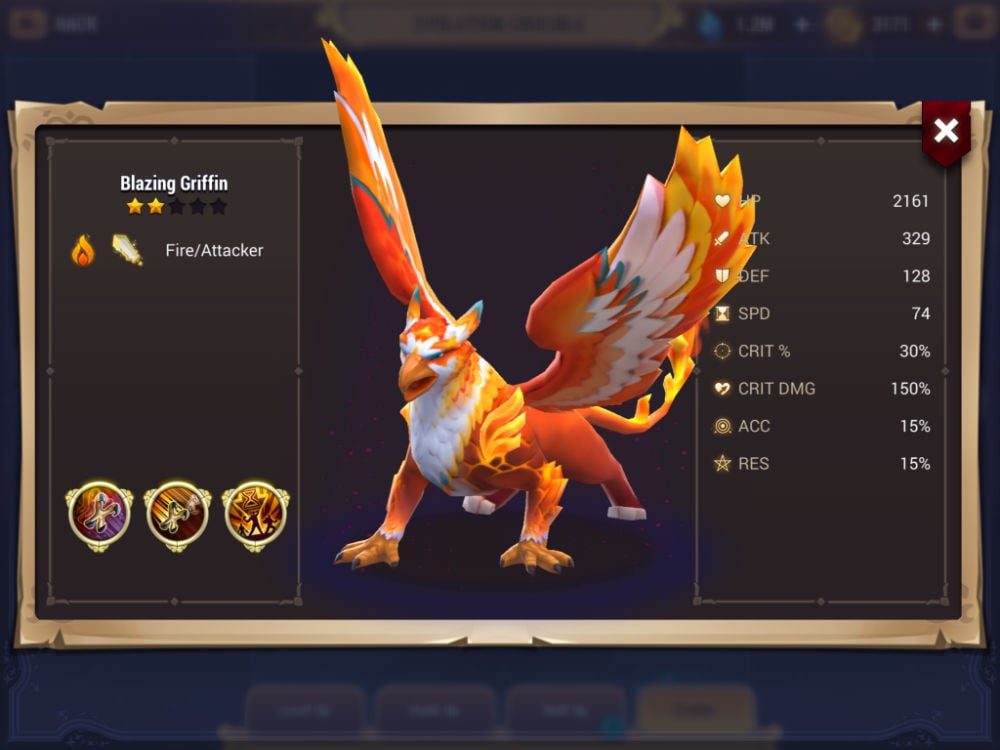 In this case, we’re not referring to the kind of farming that involves animals and fields. We mean it in the sense of returning to a completed stage to earn extra rewards — an essential practice in every good strategy-RPG.

You can do this instantaneously using Instant Tickets, or you can manually tackle completed stages at advanced and nightmare difficulty levels. These are much tougher, naturally, but they yield better rewards. 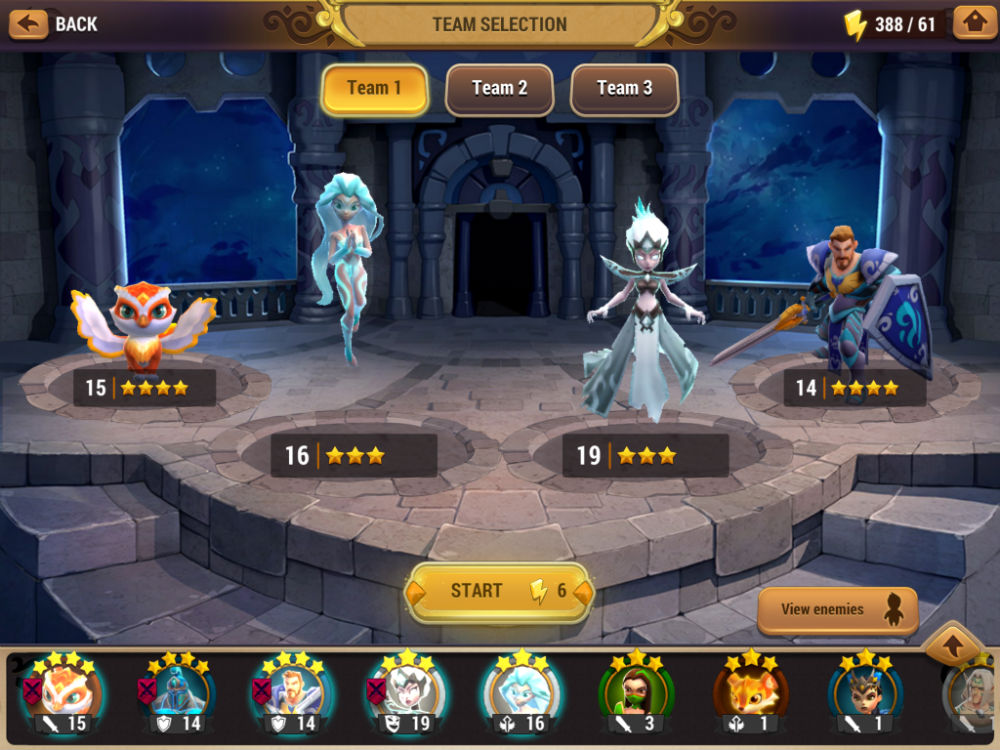 The round isn’t won until you’ve crushed your opponent. It’s natural to conclude from this uncontroversial truth that offence is more important that defence — after all, it’s offence that secures a win.

However, the Elemental Guardians community agrees that it’s more important to ensure your team survives than it is to ensure they can prevent your opponent from surviving. Therefore you should choose glyphs that emphasise DEF and HP, even in attacking creatures. 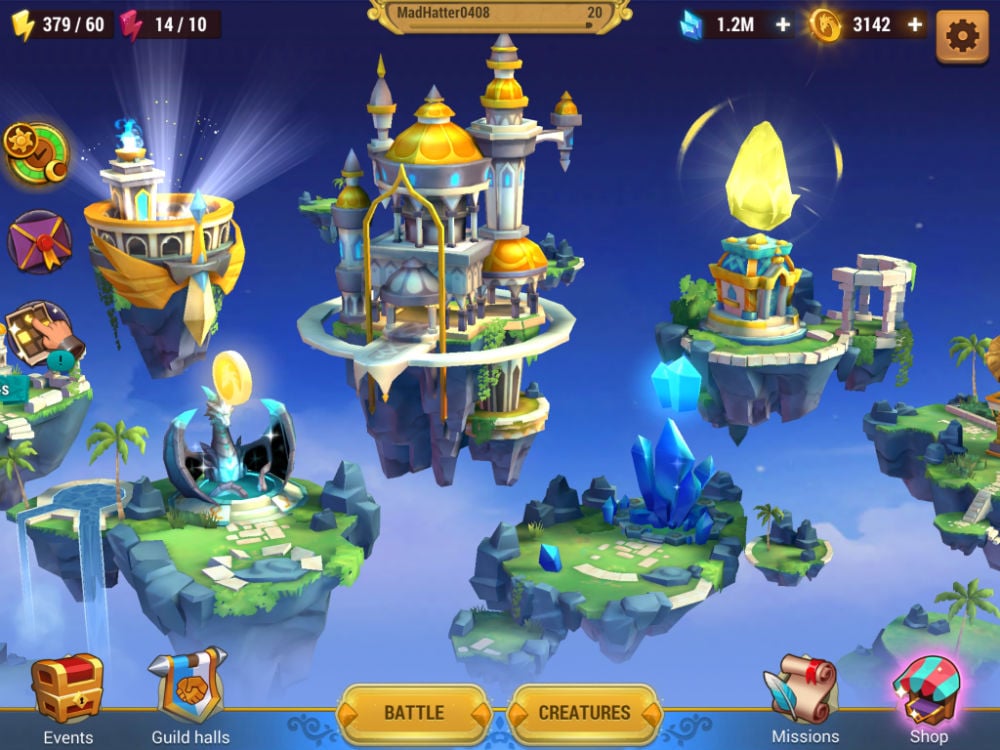 The final and most significant pitfall is failing to evolve your creatures. In absolutely every case without exception, the best creatures in the game are those that have benefited from evolution, so you should treat this as a priority.

You’ll need Magical Books, which you can buy with reputation points, which in turn you accumulate through battling in the Arena. Also, you’ll have to head to the Dragonmist Islands to farm the items needed for evolution. You’ll be glad you did.

You can look to avoid making these errors by downloading Might & Magic: Elemental Guardians on the App Store and Google Play now. And why not check out the other Guides we’ve written on the game here:

What is Touchdrive in Asphalt 9: Legends, and should you use it?

Asphalt 9: Legends — How to earn free credits and Tokens