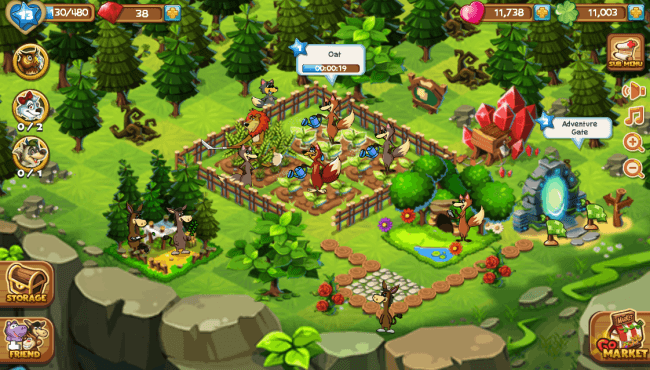 Hang around with animals, build them some homes, and train them to fight in ZooVale.

When our lives get chaotic—say, traffic snarls up, work becomes frantic, or our toddler decides he or she is going to strip naked and tear down a city street in the middle of winter—we tend to say, “Man! Life is a zoo!” As it so happens, we humans really have no idea what it’s like to live out the zoo life. ZooVale, an upcoming cross-platform social RPG, should give us a glimpse of what it’s like to live as part of an exotic menagerie—though you can still expect some inaccuracies, like animals that walk upright. Animals don’t walk upright. Not while we’re looking, anyway.

The strange world of ZooVale is populated by lions, foxes, wolves, and other critters. Everybody is having a great time just hanging out and being animals, when all of a sudden an evil witch crashes the party and starts stealing these hip mammals. You need to rebuild the village, but you also need to battle against the witch and her minions.

ZooVale‘s gameplay is divided into different tasks. You can grow the village by assembling buildings and farms. You can grow the animal population by rescuing kidnapped critters or just ordering the citizens to start making some good old-fashioned babies. And you can fight against the witch’s stooges in Paper-Rock-Scissor-style battles

ZooVale is coming to Facebook as well as iOS. Keep an eye out for its release later this spring if you’re itching to release the animal inside of you.