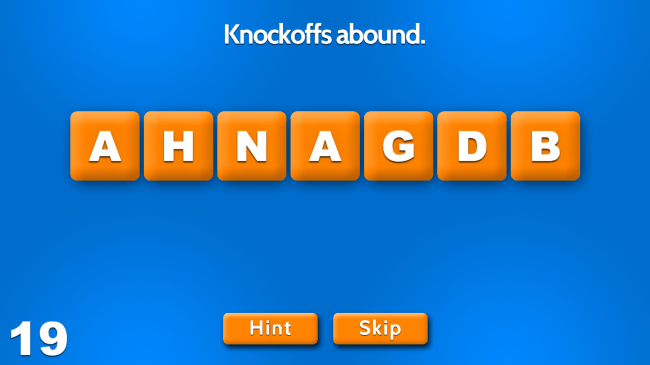 A word-based trivia game that has me stumped already

What has 7 letters, and has something to do with “Knockoffs abound”? Project Shuffle is a unique social blend of word and trivia games from Screwtape Studios, the developmental duo that brought us Conduction and Bank Job in 2011 and 2012, respectively. With the publishing support of Right Pedal Studios on their side, Screwtape hopes this puzzling word game that you can play with your friends will be their biggest release yet!

From the game’s official description page, “the gameplay is simple, yet addictively fun!” In each round, players are provided with a clue, and then they must figure out the answer by rearranging a line of jumbled-up letters. Project Shuffle promises thousands of questions across a number of fun categories like Movies, Sports, Science and Literature. Players will also be able to challenge their Facebook friends, and earn tokens to buy clues and additional word packs.

While most aspects about Project Shuffle are still considered to be a work in progress, including the game’s title and the final art style, Screwtape Studios are aiming for a release in Q3 2013 on iOS and Android platforms. The game will also be adopting a free-to-play model, and something tells me I’ll end up investing in some extra clues for this one, as I’ve been sitting here for about 30 minutes trying to figure out what “Makes a milkshake fun.” Seriously, any help on this one?