Home / Upcoming / Vainglory is a MOBA for Tablets – Can You be Optimistically Skeptical?

Vainglory is a MOBA for Tablets – Can You be Optimistically Skeptical?

One of my favorite games for the iPad right now (and likely one of yours) is Hearthstone. It’s an incredibly simple, yet deep, game based on taking a complicated genre and busting it down to work on the go.

Vainglory sounds much the same. It’s a MOBA (multiplayer online battle arena) from a new studio of former Rockstar, Riot, and Playfish employees. That’s an eclectic bunch, but we’ve seen amazing things from breakaway studios before. As a huge Dota 2 fan, I’m curious if Vainglory can follow the same trend.

Being a “MOBA guy” I get asked to try out a lot of new games in the genre. Some are interesting, but most are just dull – barely veiled attempts to replicate the success of League of Legends and Dota 2.

The me-too development bandwagon is nothing new. Before MOBAs it was Call of Duty, and before that, Guitar Hero and Rock Band. Before those, World of Warcraft.

What made Vainglory stand out, besides its pedigree, is that it’s designed for tablets. Of course, the mobile market is no stranger to aping console experiences (isn’t that right, Gameloft?), but the developers of Vainglory seem to be aware of that.

I know precisely what he means. Very well, actually. But self-awareness isn’t proof that Vainglory is any different. So, what makes this sound more like Hearthstone and less like Infinity Blade clone. 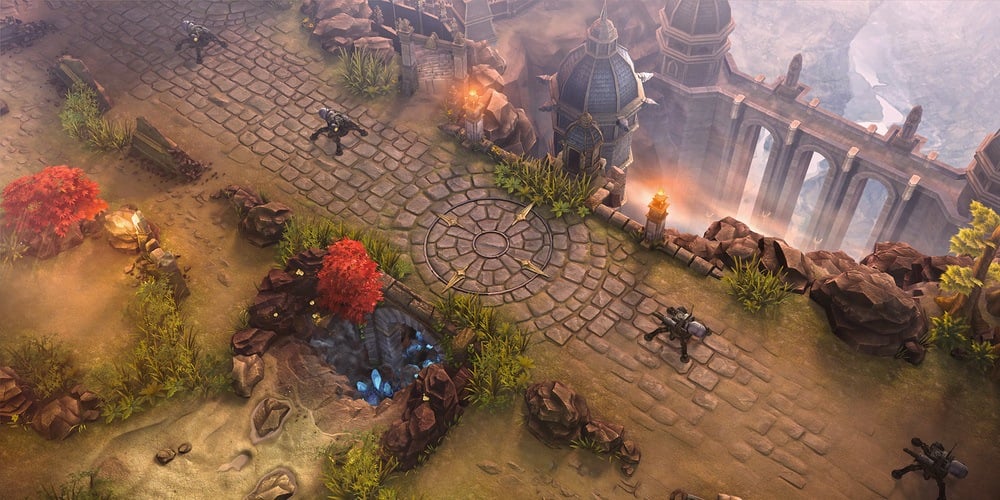 For starters, the game is meant for 3-on-3 play. Most MOBAs – pretty much all of them, in fact – use ten players. Whether it’s intentional or just a design limitation, reducing the scope actually sounds like a positive. Touchscreens and controllers can’t offer the point-to-point precision of a mouse and keyboard, so dialing back the hectic-ness just a bit might make things easier to parse.

However, the biggest possible advantage as far as I’m concerned is a social one. Spaceteam, Bounden, and yes, even Hearthstone: some of the best multiplayer experiences on mobile happen when you’re in the same room (or driveway, or bus station) as the people you’re playing with.

That’s a good kind of hectic fun mobile can provide. Since you don’t have to lug a PC or laptop around to play Vainglory, and only need to wrangle up half as many friends as a big league MOBA, the possibilities for screaming at one another in person are endless. That – if it’s something the self-proclaimed hardcore game exploits – is very good news.

What’s less heartening is Super Evil Megacorp CEO Bob Daly’s view on the game. Specifically, he says the developer is targeting fans of Dota 2 and League of Legends.

My internal alarm bells started sounding immediately. They often do when a developer or publisher intones that its game will appeal to someone else’s players, rather than attract its own niche with a fun game worth playing.

That is precisely the problem with each of the undercooked, copycat MOBAs we already have more than enough of.

So it comes down to Vainglory itself. If it’s fun, accessible, and works well enough on a touchscreen it just might carve out an audience of your own, despite what the men in suits say. The game may even appeal to those who wouldn’t dream of spending 500 hours at a PC for a single game.

If, on the other hand, it’s just another assembly line cutout I will have no trouble dismissing it like all the others.