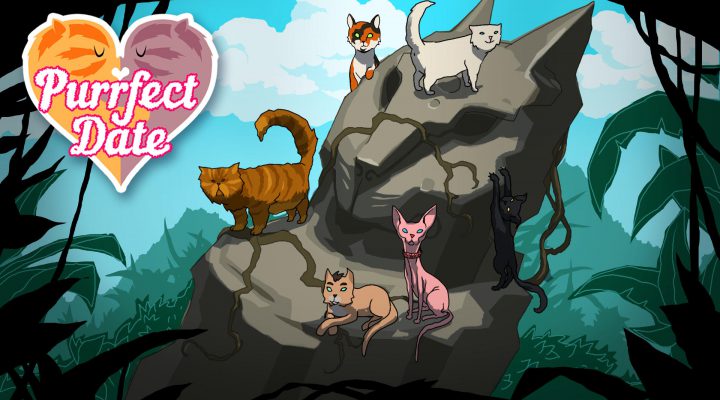 It’s a great time for gamers who want the chance to live out wonderfully weird dating fantasies, between pro-pigeon Hatoful Boyfriend, human-headed horse romp My Horse Prince, DILF sim Dream Daddy, and countless others. Despite the abundant variation in affection options, one group has been missing from this recent surge: lovable internet phenomenon, cats. The upcoming visual novel and dating simulator, Purrfect Date, looks to remedy this deficiency by letting players mingle with and ultimately woo a group of talking cats. If the word “cats” isn’t enough to snag your attention, maybe the absolutely pitch perfect tagline will do the trick: “Come for the pussy, stay for the tale…”

Purrfect Date is the first release by The Bae Team, a duo comprised of Oliver Hindle and Ruby-Mae Roberts, in partnership with publisher Bossa Studios (I Am Bread, Surgeon Simulator). The idea came out of Hindle and Robert’s attempt to brainstorm their ideal game, which would include “Cats, intrigue, dating sims, the TV show Lost… all of these things became the ingredients that went into making Purrfect Date.” The result is an adventure that puts you in the role of a research assistant on an island overrun by cats, learning about the history of Cat Island and getting to know its current inhabitants. There will be six playable researchers and six romanceable cats with the story unfolding across seven chapters. Will you pursue video game-loving Kibbles? Free-spirited Trixie? Possible alcoholic McMurphy? (Just remember, these are all still cats.)

While there’s no set release date yet, Purrfect Date is planned to launch this winter on iOS, Mac, and PC. The Steam page is up now, and the game can be followed or wishlisted to activate news alerts.

Adventure Time Gets a Mobile RTS, ‘Champions & Challengers’, this Fall