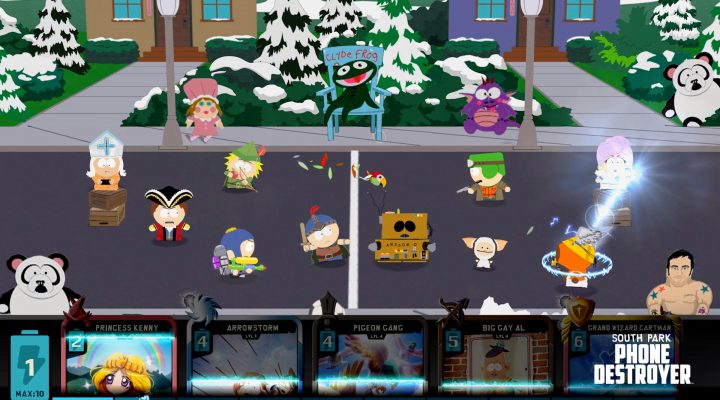 For anyone who had Ubisoft in the “which big company will make a mobile reveal first” pool at E3 2017, please collect your winnings. In the middle of a press conference that the kids assure us was “lit,” Ubisoft devoted a few minutes to the upcoming mobile title South Park: Phone Destroyer.

What kind of game is it? Well, it promises “epic real-time battles,” is free-to-play and also has a collectible card game element. You’ll take on the role of the New Kid and have to rally a bunch of South Park characters to face off against cowboys, pirates, cyborgs and gods. Maybe all at the same time for all we know.

Once you’ve got your team looking tough enough to tackle the single-player campaign, you’ll also want to make time for real-time multiplayer. Because that will be a big thing in the game as well.

No word yet on whether it will have as much swearing as South Park: The Fractured But Whole, which also got some love during the Ubisoft presser. South Park: Phone Destroyer is currently in soft launch in Sweden, Norway, Denmark and Finland, where South Park is king. Probably.

In any case, we’ll be keeping tabs on this one, and you can too by making sure you bookmark the official site. And thanks Ubisoft, for giving us mobile games lovers something to discuss during a time when console gaming generally runs amok over the news for nearly an entire week.