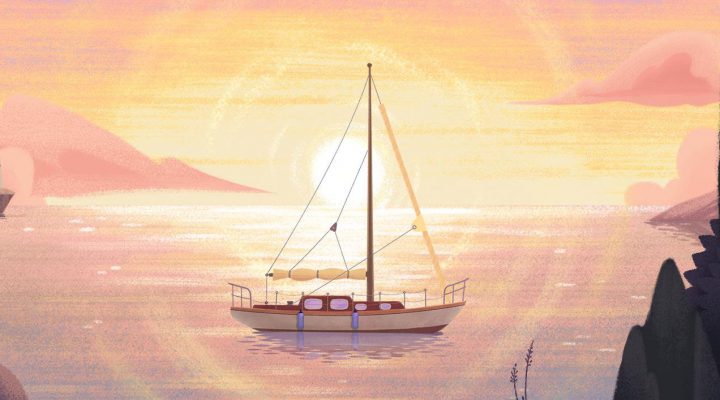 Old Man’s Journey by developer Broken Rules (Yet It Moves, Secrets of Rætikon, Chasing Aurora) is “a game about life, loss and hope.” It tells the story of an aged protagonist on an expedition inspired by his past experiences and relationships and a desire for reconciliation. Players will help guide the old man on his trip up a long and hilly mountain path inspired by the French Alps and the Bretagne. Along the way they’ll learn more about his life through snippets of his memories that will help explain why he set out in the first place and what this journey really means.

Gameplay in Old Man’s Journey is untimed and relaxed, allowing players and the protagonist a chance to stop and enjoy the gorgeous, colorful environments he’ll pass through along the way to whatever his ultimate destination turns out to be. The main interaction players will have is sliding roads and hills up or down to open up a new path for the old man, turning areas that were previously in the background into accessible walkways that lead farther up the mountain. This mechanic reminds us a bit of recent puzzler Splitter Critters, except instead of tearing apart the world and creating drastically different configurations you’re gently landscaping to adjust slopes and reveal new passageways or items previously hidden in the background.

There will also be some thoughtful puzzle-solving, such as getting a rock to roll through a wall without hitting the old man, as well as lots of interactive objects and areas that may impact your journey or may just be for fun, like a crotchety old woman who doesn’t appreciate you opening her blinds or a herd of sheep that bounds back and forth in front of our wistful hero.

Much of the game is still a mystery at the moment, and we’re okay with that. Old Man’s Journey is one of discovery for both the protagonist and the player and seeing too much of it would spoil the surprise. What is clear is the beautiful world Broken Rules has created for that journey, from the bright and densely-packed village to the rocky hills dotted with misty waterfalls to the distant sunset looming over yet-reached peaks, all of which have earned it a place as a finalist in IGF 2017’s “Excellence in Visual Art” category.

Although Old Man’s Journey doesn’t have an official release date yet, it will be bringing its lovely, interactive trip to mobile and PC sometime in 2017.