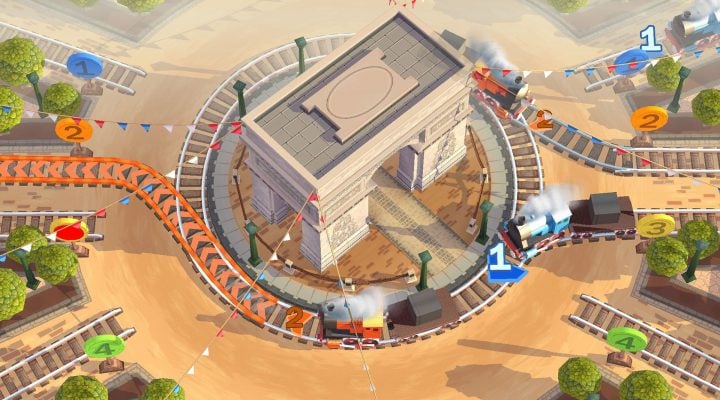 We’ve seen more than a few series gain “tracktion” on the App Store, if you’ll pardon the pun – and when they do, it usually doesn’t take long for the sequels to start pouring out.

But that hasn’t been the case for Train Conductor. After a late 2009 debut and an early 2010 sequel, we haven’t heard a peep from The Voxel Agents about this one. It’s been more four years since we’ve had an excuse to yell “All aboard!,” and frankly, we’re getting a little tired of waiting.

So are they, it seems: Train Conductor 3 was announced this morning, and it’s coming sometime next year.

As you’d no doubt expect from a series that’s been on hiatus for five years, Train Conductor 3 will put a fair bit of visual polish on that simply wasn’t available to the developers in 2010. HD textures, dynamic lighting, advanced shaders – it looks lightyears ahead of what we last saw in Train Conductor 2.

This time around players will travel to Europe, with promised set pieces that include the Arc de Triomphe, London’s Tube, and Venetian canals.

It’s strange that the series is resurfacing after so many years of quiet, but considering how many new device owners have come into the fray in that time, a new entry might just be a brilliant move. They’ve proven that twitchy track-switching gameplay is good fun before, and now they have a chance to prove it to a whole new audience.

If you can’t wait until 2015, and you happen to live down under, you’ll be able to give it an early play at PAX Australia on October 31. The rest of us will have to wait until the game’s eventual release on iOS and Android in 2015.