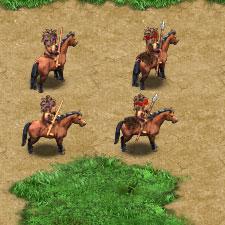 Since we first brought you news of Totem Tribe 2 back in March, more details of the Totem Tribe sequel have been emerging over on Enkord’s blog including details about new buildings, mounted units and the game’s music.

First of all, as you can see from the screenshot below, Totem Tribe 2 will feature a brand new way of getting around the island: horses and mounted units.

Finally, here’s a musical demo – don’t be surprised if you hear this music or something very similar in the final game.

Not all great games get sequels, but we’re happy to announce that the fantastic strategy game Totem Tribe will definitely be getting one. The game’s developer, Enkord, has just shared the first details of Totem Tribe 2 on its website.

The first new feature Totem Tribe 2 will have is resource gathering. “While the absence of resources in Totem Tribe 1 was fun, we feel adding resources will add more depth and strategy to the game,’ said Enkord. “We will try to make resources mining/management as simple and intuitive as possible not to overcomplicate the game.”

Instead of picking up the story of Aruku, the heroine from the first game, Totem Tribe 2 will allow players to create their own personalized hero who will be able to “travel, fight, lead an army, interact with objects, and so on.”

Enkord has promised to post more details about the upcoming game soon.