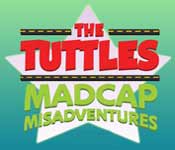 It’s not every day that celebrities get involved with casual games, but William Shatner, Bob Saget, Jamie Lee Curtis and others will be adding their voices to The Tuttles: Madcap Misadventures. The game was developed in partnership with the Starlight Starbright Children’s Foundation, and a portion of all proceeds from game sales will go towards supporting seriously ill children and their families. The game launches later this month, but we were lucky enough to get our hands on a preview.

The Tuttles are a fairly typical family – at least on the surface. Barry (voiced by Bob Saget) is the all-American Dad, Barbara (Jamie Lee Curtis) is the ever-prepared mother. Teenage daughter Jessica (Ashley Tisdale) loves chatting on her cell phone, and son Zach (Dominic Scott Kay) is obsessed with video games.

The family’s life takes a turn for the bizarre when Barry uses spare parts to transform the family vehicle into the futuristic “minivan of tomorrow” complete with wings, a jet engine, and a talking computer voiced by William Shatner, who’s in his element as a self-absorbed TV actor whose personality has been downloaded to the system.

Barry herds his reluctant family into the flying van for a vacation, and they set off to see the Alamo. Of course, the journey doesn’t go smoothly. The van runs out of gas and crash lands in the desert, which is the start of a series of adventures that are brought to life in humorous comic book style cutscenes with a script by comedian Dave Thomas and his team at Animax Entertainment.

The game is divided into flying levels, where you must help Barry pilot the van around obstacles like birds and telephone poles while collecting star power-ups that fall from the sky, and side-scrolling levels, where you control various members of the Tuttle family and navigate them around obstacles like snakes and prickly plants while searching for important items. Key items, which you must find in order to complete the level, are indicated by a red arrow which guides you in their general direction.

Those who have played Kenny’s Adventure: Scuba in Aruba – a DivoGames title – will recognize the same basic gameplay elements in The Tuttles, and even familiar scenery, enemies and objects like the collectible coins. Zach’s underwater levels (later on the van crashes again into the ocean…) bear a particularly strong resemblance to Scuba in Aruba, even down to the sharks lurking in the water.

Characters can run, jump and whack things – generally using an object like a gas can or purse. Enemies can be stunned by whacking them or jumping on their heads, or can simply be jumped over and avoided altogether – in other words, fighting is not necessarily required to progress through the game. Players can also collect coins and other bonus items to add to an overall score for bragging rights.

With a kooky premise, funny dialogue presented as comic book style cutscenes, and celebrity voices (which also include Dave Thomas and Dave Coulier as characters the family meets on its adventure), The Tuttles: Madcap Misadventures is shaping up to be a side-scroller to watch out for – and you can’t help but feel positive vibes for a game that was created for a good cause.