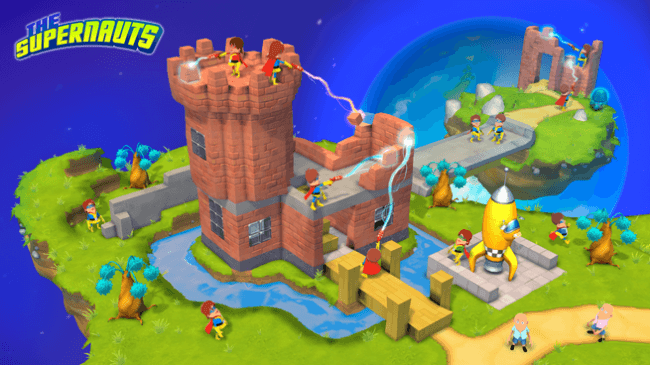 The Supernauts sets the stage for a superheroic sandbox MMO

The upcoming The Supernauts promises cross-platform, free-to-play action in a superhero world where problems are solved not by punching bad guys into a stupor but by working together and sharing content in a colorful, vaguely Minecraft-like environment.

Superheroes are a lot of fun, but they tend to take a rather primitive approach to conflict resolution: someone gets out of line, and then they get socked in the kisser. In the superhero world of The Supernauts, however, players will employ a more non-violent method of getting things done, using a beam device to solve puzzles of various sorts by creating and destroying buildings and other structures block-by-block.

The Minecraft inspiration seems pretty obvious, but The Supernauts is played from a third-person perspective in a much brighter and more colorful world, rendered in a visual style intended to appeal to a younger audience. The game will include many of its own challenges but far more intriguing is that it will also allow players to create their own puzzles and levels, and then share them with the rest of the community.

That would seem to be The Supernauts’ greatest potential strength: making content generation a part of the game means a virtually endless supply of user-generated content in a persistent sandbox world, so that players should never run out of things to do. Real-time multiplayer support that works across all platforms also promises to be a big part of the appeal, as players will be able to join in on the fun from just about anywhere and anytime.

The Supernauts will be a free-to-play cross-platform release, with versions planned for iOS, Android, Facebook and the web. It’s is still in alpha testing, which is to say that there’s a lot of time left for things to change before it’s put out the door, but at this point it sounds like it has the potential to be very cool and very exciting. Look for it to come out later this year.