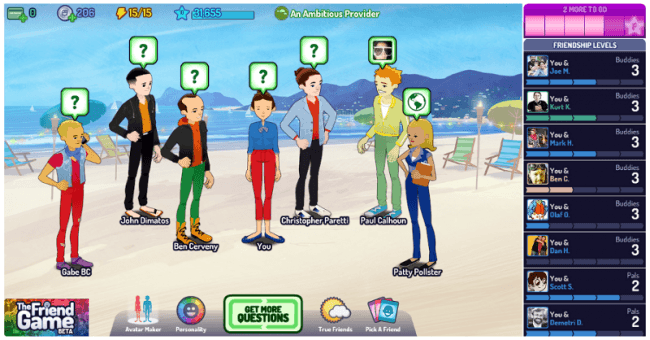 With the potential to become “The Enemy Game”

How well do you actually know your Facebook friends? With The Friend Game, that’s a question Zynga wants to help you answer. It pits players against one another in a battle to see who knows who the best, although it’s not as intense as it may sound. It’s pretty lighthearted, in fact, and could even be described as a virtual mixer featuring you and many of the people you’ve added on Facebook.

In The Friend Game, you answer question after question about yourself and any of your Facebook friends also playing the game. All of this takes place in a virtual world filled with you and your friend’s avatars. If you click on your friend’s avatar, you’ll be asked questions about them—whether or not they’re a hopeless romantic, for example. If you’re able to predict their answer, you earn points. More importantly though, you earn the satisfaction that comes with knowing a lot about your friends. No amount of points in the world could be better than that.

What’s most interesting about the game is its ability to show the relationship you have with your Facebook friends. Do you only accept requests from people you truly know, or are you a little more lax? That may sound like a bummer question to answer, but The Friend Game keeps it fun with upbeat visuals and goofy questions. Don’t expect to walk away from it in the throes of some kind of existential crisis.

The game is currently in closed beta, and while it’s full at the moment, it’s possible Zynga will let more in before the game is formally released. Speaking of, we don’t have a release date just yet! Be sure to click the “Follow” button atop this page if you want to be notified of when it launches.