With licenses like The Walking Dead, Borderlands and Game of Thrones under their belts, Telltale Games are known for creating fresh stories in familiar environments.

…but what if that familiar environment doesn’t usually tell stories?

That’s the conundrum Telltale will face with their next game. Announced in conjunction with Mojang this morning (via a cute little browser game dubbed ‘Info Quest II’), Minecraft: Story Mode is due out in 2015 for a variety of platforms including iOS and Android. 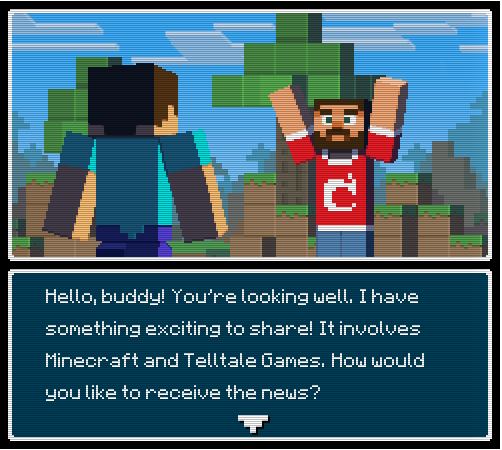 Not many details are available quite yet, but we know that (like most Telltale Games) Story Mode will be episodic in nature, and it isn’t meant to create a backstory for Steve or explain the world of Minecraft in any way.

In other words, it sounds like Telltale should have free reign to tell whatever story they like. I can’t think of a more fitting situation for the world’s biggest sandbox game. And if you’re worried that the lack of narrative in Minecraft could spell doom for Telltale, let me just say this: The LEGO Movie.

Keep an eye out for Minecraft: Story Mode Episode 1 sometime next year.