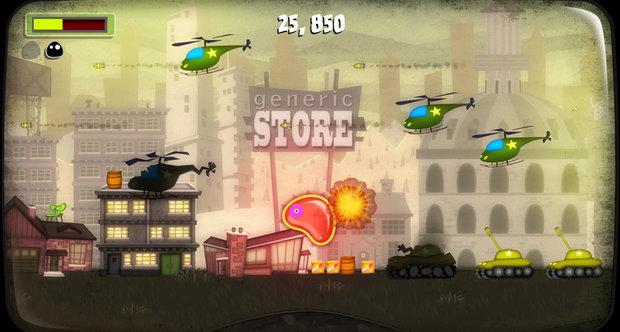 The blobs are back

The hit PS Vita launch title Tales From Space: Mutant Blobs Attack is coming to the PC in August.

Originally released in February for the PS Vita, Tales From Space: Mutant Blobs Attack is a side-scrolling puzzle-platformer that puts the player in the gooey ooze-boots of a large, rather unpleasant mutant blob from space – hence the title – that’s escaped from lab captivity and is now out to eat everything it sees, in some sort of bizarre, gastronomically-powered bid for freedom. The more it eats, the bigger it gets; the bigger it gets, the more it can eat. The ultimate goal is simple: eat everything!

The PS Vita version of the game was a hit, and now it’s coming to the PC by way of Steam. The updated version of the Mutant Blobs Attack will feature everything that made the original so popular, including a sly sense of humor and a perfectly-appropriate setting inspired by the flying-saucer-crazed 50s, and adds updated mini games designed specifically for the PC, “ultra-glorious” high-resolution visuals, support for gamepads and keyboard/mouse controls, and Steam achievements, cloud saves and leaderboards.

“The preview trailer on YouTube doesn’t show off a whole lot of gameplay, but what’s there looks pretty cool (and flat-out pretty, too) with bright, colorful graphics and a very hip visual style. And if that music playing in the background is actually part of the soundtrack, it’ll be even better. Even if you’ve already played the Vita version of Tales From Space: Mutant Blobs Attack this PC re-release may well be worth a second go-around, and for those of us who haven’t, it looks like it might be a real treat.

The PC version of Tales From Space: Mutant Blobs Attack arrives on Steam on August 15.