Strategy and Peasants Collide in Threes! Designer’s Next Game 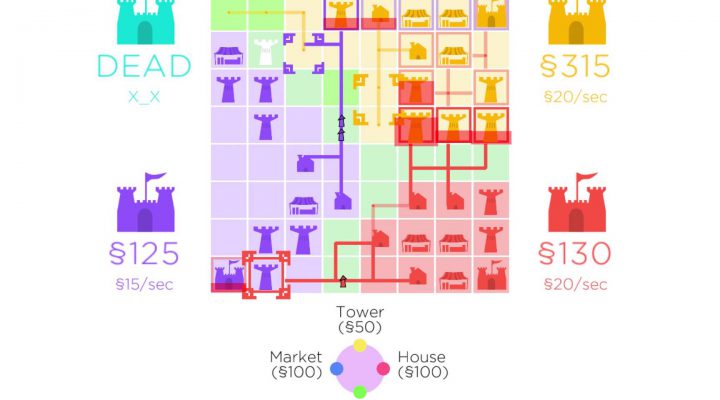 Sirvo, the creators of Threes!, have a new game. It looks awesome.

Close Castles is a bit of tower defense with a bit of real-time strategy in a multiplayer environment. By pouring peasants into opposing territory, you’re meant to fill up their castle with your color. To defend, you build towers with currency that accrues over time.

Just like Threes! it’s deceptively simple, given its probable addictiveness. Also like Threes! it uses a simple, low-sample color scheme. Unlike the studio’s previous work it’s clear this is a game designed with controllers in mind.

“It literally lives on my laptop,” Sirvo designer Asher Vollmer said to Polygon. “I spent about a week on it over a few months. I’m trying to figure out what to do with it. This is console-ly, so I think a console would be nice.”

As you can see in the video above, the game prompts the press of a start button. At this year’s E3, an Xbox One version of Threes! was announced during Microsoft’s press conference. Perhaps Sirvo is feeling burned by the clone-tastic mobile scene and looking to try new things.

Regardless, there doesn’t seem to be a release date or platform, yet. Vollmer may say “console,” of course, but all I heard was “handheld multiplayer experience between four friends sitting around yelling at each other.”

Angry Birds to Transform and Roll out This Fall

Can You Make a Better Mario than Miyamoto?