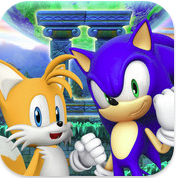 It’s funny how the world works sometimes. It was only two weeks ago that we here at Gamezebo were publicly questioning the whereabouts of Sonic the Hedgehog 4: Episode II. Now, in what we can only assume is a direct reply to our question, SEGA has unveiled a teaser trailer that is promising a return of the blue speedster sometime this year.

Last year, SEGA confirmed that their highly polished port of Sonic CD was meant to bridge the gap between Episode I and Episode II. Thanks to the teaser trailer, we have something of a clearer understanding. The trailer promises “the rebirth of a villain,” before cutting to an image of Metal Sonic – a character that made his debut in 1993’s Sonic CD. They’re also promising “the return of a sidekick,” the one and only Miles “Tails” Prower.

While there aren’t many more details available than that, we’re going to keep our fingers crossed and hope that Christian Whitehead is somehow involved in the mobile version of Episode II. For those not familiar with the name, Whitehead was in charge of the sublime Sonic CD port – or as we like to call it, the first Sonic game to really nail touch screen controls flawlessly. There’s no word yet on whether or not this will happen, but considering how well-received Sonic CD was, this seems like a no-brainer.

Keep an eye out for Sonic the Hedgehog 4: Episode II sometime in 2012.