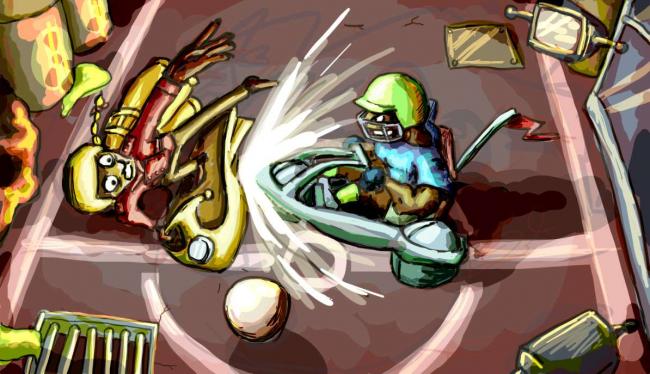 Welcome to the space jam.

I’ve never understood why ‘playing fair’ is such a central tenet of childhood learning. Have any of these teachers even played Mario Party? In all seriousness, some of the most fun I’ve had with my friends involves activities that feature frantic, fun-filled jostling for supremacy. So when independent developer Alistair Aitcheson used the words “cheating and stealing are encouraged” in describing Galaxyball 2113…actually, I got a little too excited and blacked out, so I’m vague on the details of what happened next.

What I’m not vague on, however, are details about the game. Following up his critically acclaimed Greedy Bankers vs The World, Aitcheson is continuing his support of single-device multiplayer – an attempt, he says, to create organic shared experiences of play.

“The design of the game followed a lot of experimentation with multiplayer shared-iPad games that I’ve been doing since Greedy Bankers vs The World,” writes Aitcheson in an e-mail to Gamezebo. “I’m really enamoured with games that encourage players to interact outside the screen itself, and [that] open up all kinds of possibilities for creative ‘bending’ of the rules.” In this vein, Galaxyball 2113 is a multiplayer-focused competitive sports title centered around an original game described as “football on hoverbikes.”

Players do their best to fling themselves into the ball in order to score on their opponent’s goal, all while keeping an eye out for game-changing power-ups. Armed with these all important items, Galaxyball 2113 goes from being a variant on air hockey to being something altogether more evil.

“Players can freeze their opponents on the spot, ram them into buzz-saws, or activate multi-ball for extra havoc!” enthuses Aitcheson. “You can smash your friends to pieces if that’s what it takes to win.” Though, let’s be honest: who doesn’t want to smash their friend to pieces whether or not it was truly needed to win? Meanwhile, for those who like the single-player grind (or just hate people), the game will have a separate mode dedicated to using your skills against a clock to set high scores. 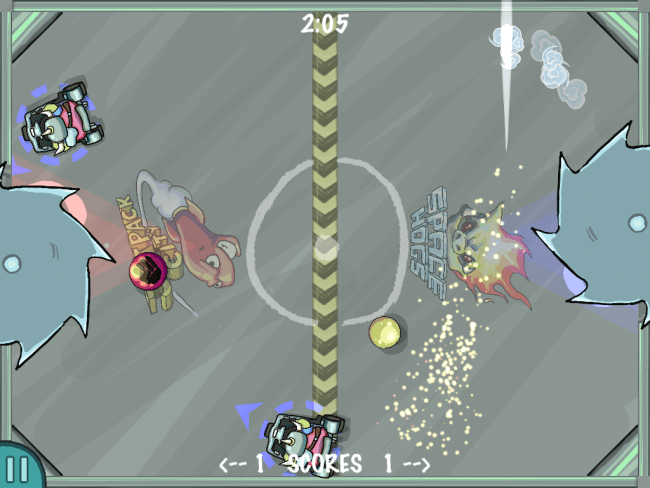 Per the name, the whole thing will be packaged inside an over-the-top sci-fi aesthetic, and Aitcheson is already crafting characters representing different eras and tropes, each armed with powers unique to their personality. And while he’s noted that the current art style is likely to improve and change, I’m already kind of starting to fall for the Scribblenauts-esque simplicity of early screenshots. Okay, I’ll come clean: I’m kind of starting to fall for Galaxyball 2113 as a whole.