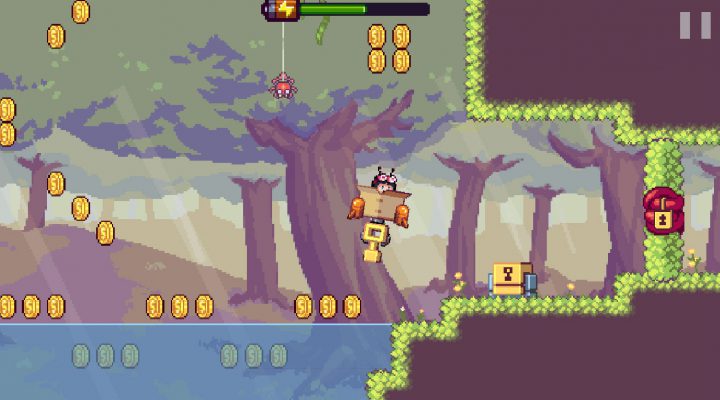 I know, I know. The Metal Gear games have some pretty awesome cardboard boxes. I didn’t forget about them. But being in a cardboard box isn’t the primary thing you’re doing in those games, whereas Sky Chasers from Lucky Kat Studios is all about taking the young protagonist, Max, climbing into a cardboard box and platforming your way through a magical world.

That world is rendered in equally magical pixelated fashion, and as you can see in the launch trailer below, the result looks delightful. Also, it looks like Max gets some serious upgrades for his box at some point.

The folks at Touch Arcade played an early build of Sky Chasers and liked what they saw, praising the gameplay mechanic that requires you to tap both sides of the screen to balance out the thrust on both sides of the box as needed. It also sounds like the free-to-play model behind the game will focus around checkpoints, where you can unlock some by watching ads or paying premium currency or simply pay one price to unlock them all.

The best news of all is that we’ll all know if Sky Chasers is as cool as it looks very soon, as Lucky Kat says the iOS release will be on January 21 with Android following a week later. This is the part where I’d usually say something like, “Better brush up on those cardboard box-piloting skills,” but since that’s not really a thing, all I have to offer you is this: ¯_(ツ)_/¯

FNAF World Gets a Release Date