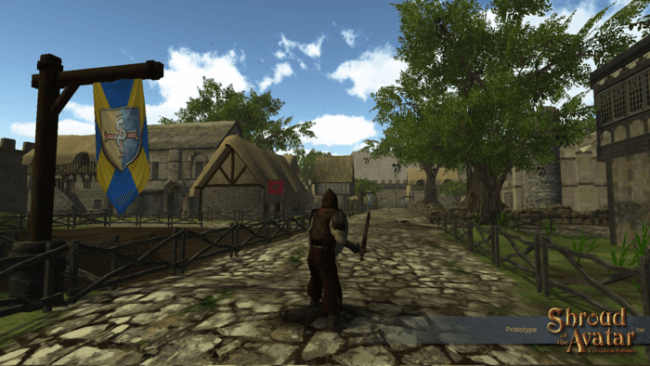 Ultima fans would be rejoicing, if they hadn’t all just died of happiness.

Richard “Lord British” Garriott has a Pied Piper effect on RPG players; when we hear his enchanting pitch, we’re compelled to follow.  And with good reason—his prolific and genre-defining Ultima series and 15-years-running MMORPG Ultima Online put the player’s immersion and investment in their worlds above all else.  After an extended sabbatical focusing on non-Ultima MMOs and even Facebook hoarder fantasies, Garriott is back to doing what he does best in the mesmerizing multiplayer RPG, Shroud of the Avatar: Forsaken Virtues.

Shroud of the Avatar draws its inspiration directly from Garriott’s Ultima series at its height, placing significant focus on players’ choices—not just in moral decisions or plot points, but also in the part they play in the game world itself.  Garriott and Portalarium’s intention is to have “rich, customized experiences unique to each player and their individual play styles,” accomplished by “creating a large, interactive and ever-changing world, then turning the player loose to define their own role.”  This means that players who wish to live out their days peacefully crafting armor in their shaded cottage will be able to do so, while the more combatant among us can spar NPCs and each other until the milkable cows come home.

This also means Shroud will adhere to Garriott’s own guidelines for creating an “ultimate RPG,” which includes a highly interactive world, where objects that look interactive always are; “logically constructed and internally consistent” plot points, quests, and character interactions; and the most tangible feature from past Lord British titles: physical goods that reflect the in-game world and lore.  Although cloth maps and bejeweled amulets may contradict the ever-growing world of digital downloads, they also serve the greater purpose of connecting the player to their experience, not just as a virtual avatar, but physically as themselves.

All of this classic goodness that we’ve already come to love and appreciate from Garriott’s previous masterworks will be wrapped up in a modern new engine in Shroud.  The third-person, fully interactive and 3D world—while a departure from the familiar top-down environments of Ultima—looks to enhance the player’s immersion, and is the logical next step for a creator who consistently risks taking leaps forward.

Although Shroud of the Avatar is currently seeking support on Kickstarter, it already earned over 25% of its $1 million goal in its first twelve hours.  At this rate, we’ll definitely be enjoying the efforts of Garriott, Portalarium, and his team of industry veterans in the hopefully-near future.  Don’t let the “sure thing” deter you from contributing, though—you know you want the title of “Lord” in the game.  And at this level of immersion, it may very well carry over to real life.