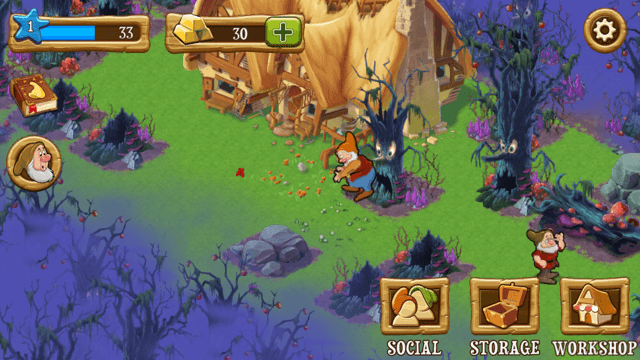 The Evil Queen is back, and the dwarfs had better do something about it

The Witch is back. Really, when you think about it, few villains have the tenacity of Snow White and the Seven Dwarfs‘ wicked stepmother. She reigned over Walt Disney’s very first animated feature film, and it appears she’s still consumed by the dark fantasy of putting an end to her stepdaughter Snow White. And in Snow White: The Queen’s Return for iOS and Android, she nearly succeeds in putting Snow White away forever. It’s your job to reverse her curse.

Snow White: The Queen’s Return lets you take control of the seven dwarfs (yes, that’s dwarfs, not dwarves). Snow White herself has been captured and locked up by her uncool stepmom, and she’s put a curse on the forest to boot. Now the foliage is twisted and evil, and the darkness that has covered the land can only be driven back by items called “sun lamps.”

Snow White: The Queen’s Return is currently available on the Canadian App Store, and we had a chance to go hands-on with it. What we found greatly resembles the mechanic sin the Smurfs & Co games. Instead of rounding up scattered Smurfs, however, you need to round up the famous seven dwarfs. Eh, Smurfs, dwarfs—same diff, right? No doubt they all cross paths at family reunions.

In addition to gathering your dwarf friends (which is done by exploring the depths of the woods and crafting items to entice the dwarfs into returning), you need to make the forest a less twisted, creepy place. This is done by lighting up the night with your sun lamps, which need to be built with rare items, or bought with the game’s hard currency (gold bars). The more dwarfs you have on hand, the more there are to do your bidding. Tasks include chopping down trees for wood, mining rocks for bits of metal, pulling up weeds, building and repairing useful workshops, and planting trees that don’t have teeth and sneering faces.

Snow White: The Queen’s Return is evidently engineered to bring in young, Disney-obsessed players. It’s interesting that the dwarfs take the fore in this game, since young fans of the movies typically indulge in relevant games and merchandise to rub shoulders with Snow White herself. Either way, it’s nice to hang with the dwarfs for a while, especially since each one is well-drawn, well-animated, and adheres to the personality that defines him in the films (spoiler: Sneezy sneezes a lot). 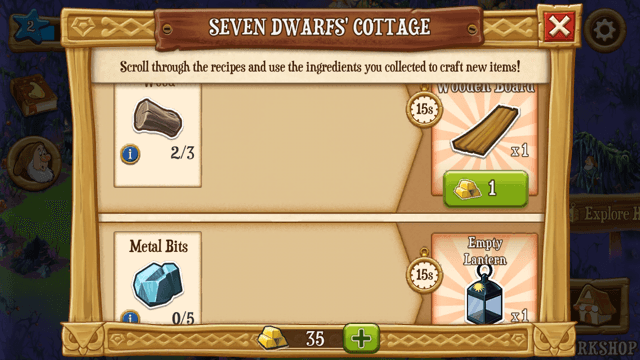 Moreover, the gameplay should be easy to dive into for anyone who’s already familiar with the Smurfs & Co titles. One major difference, however, is that there’s seemingly no energy limitations in Snow White: The Queen’s Return. You can chop down evil trees and harvest flowers all the live-long day if that’s what you want to do (hi ho, hi ho!)—which is a good thing too, because those trees are creepy.

Snow White: The Queen’s Return does appear to have some stability issues. The game occasionally crashes or freezes, and there are some complaints about in-app purchases being gobbled up without any returns. Disney is working on ironing these out, and hopefully the cabins and mines will be in tip-top shape by the time the game goes live worldwide.