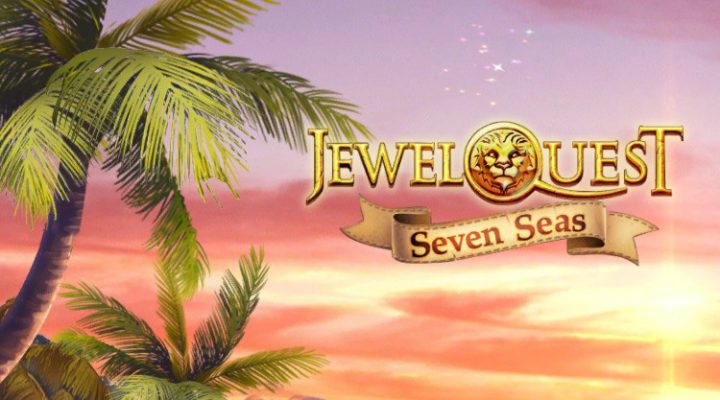 When it comes to match-3 brands, few are quite as well known as Jewel Quest. It’s up there with Bejeweled and Candy Crush for match-3 fans, but it’s been a long time since we’ve seen an entry in the main franchise. The sixth major Jewel Quest game, The Sapphire Dragon, was released all the way back in 2011.

We’ve seen a number of spin-offs and standalone releases (like this summer’s Jewel Quest for Cash) in the interim, but fans who’ve been wanting to see what’s next in the match-3 adventures of heroes Rupert and Emma Pack have been left wanting. Next month their wait comes to an end with the launch of the seventh game in the series, Jewel Quest: Seven Seas. And we’ve had a chance to go hands on early! 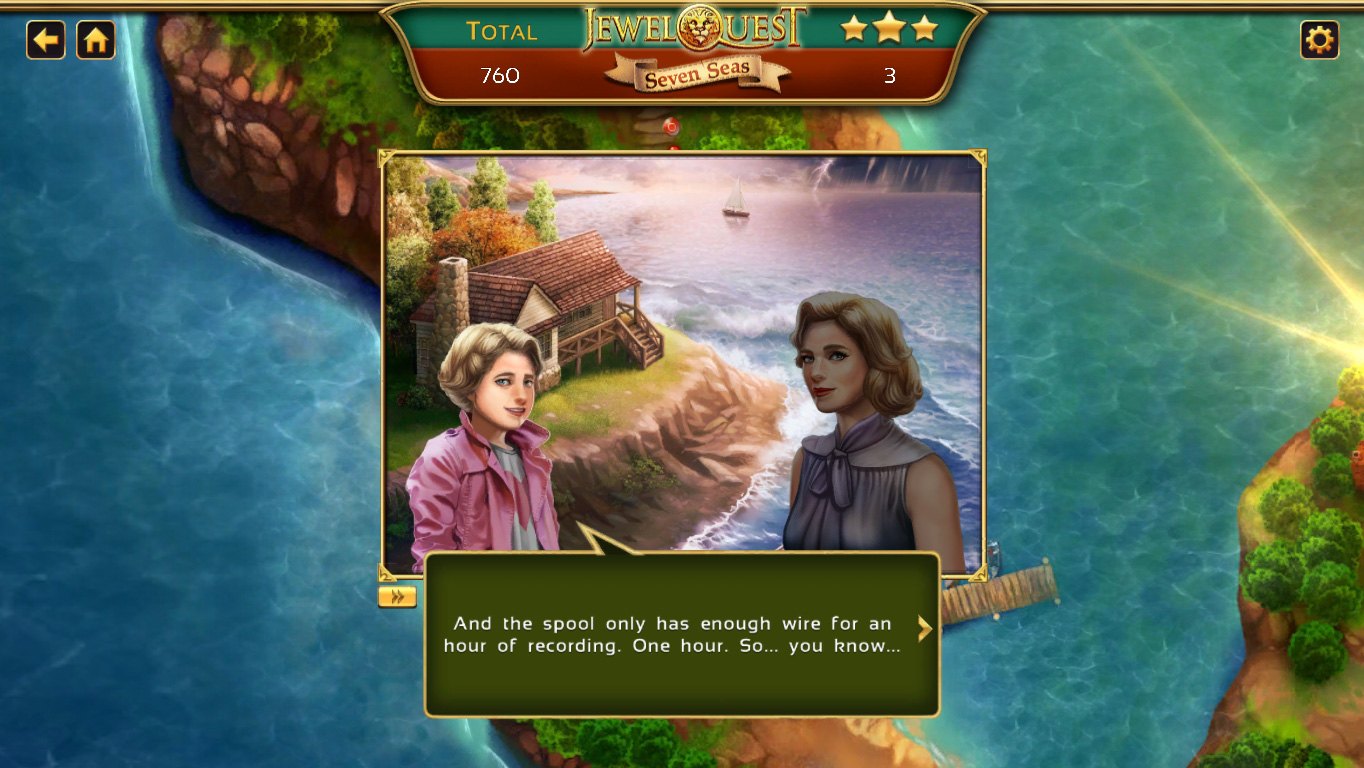 Gamezebo was given the opportunity to play the first 10 stages of Jewel Quest: Seven Seas — and after five years of mostly samey mobile match-3 gaming, we found it to be a breath of fresh air. (Sea air usually is!)

Players will set off on a journey of nostalgia, as Emma and Rupert tell the tale of an old adventure to their daughter. The story starts off tranquil, but quickly works into a panic after they receive an urgent message that takes them across water. This is a story told in short vignettes (and even smaller snippets of text at the start of each puzzle). It’s interesting to follow, but ultimately optional. If you’re really just here for the puzzles, nobody is going to blame you. 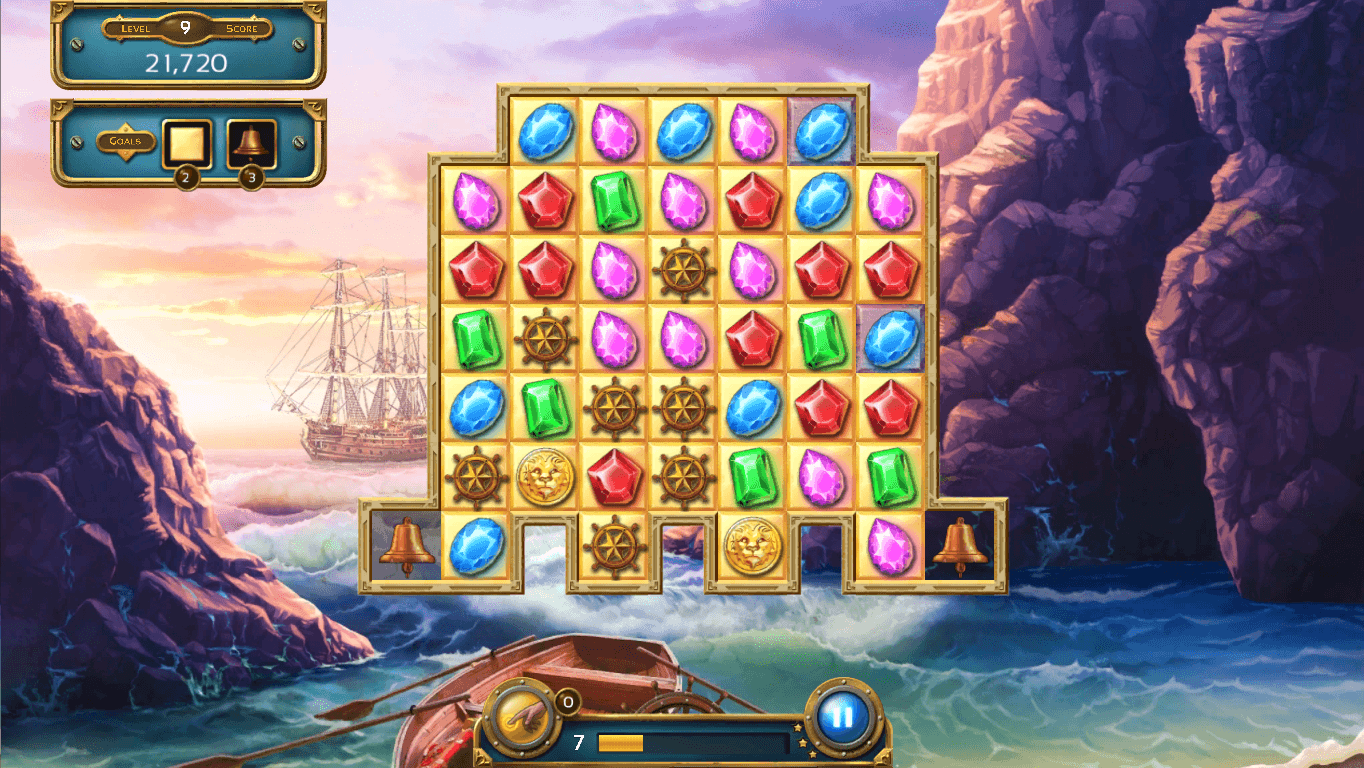 The biggest additions this time around are “Ship Wheels,” a new power-up that you create by matching four gems instead of three. Once created, you can choose a direction, clearing the gems next to you all the way to the edge of the board (swiping up on a Ship Wheel will clear the gems above it, swiping down clears below, etc..) And if you have a Ship Wheel in the row you’re clearing with another Ship Wheel? That trigger a clearing in two directions, creating plenty of opportunities for strategic placement and play.

Ship Wheels can also be used to create the “Midas Touch.” By using a Wheel to clear away a Gold Coin (which you’ll make by matching five gems), you’ll earn the ability to touch any tile you want and turn it gold. When you need to turn every square gold in a level to complete it, this can be a real lifesaver — especially for those hard to clear spaces.

In fact, Jewel Quest: Seven Seas really goes all-in on the idea of Ship Wheels, even using them as elements in objectives — like ringing 3 bells with Ship Wheels. 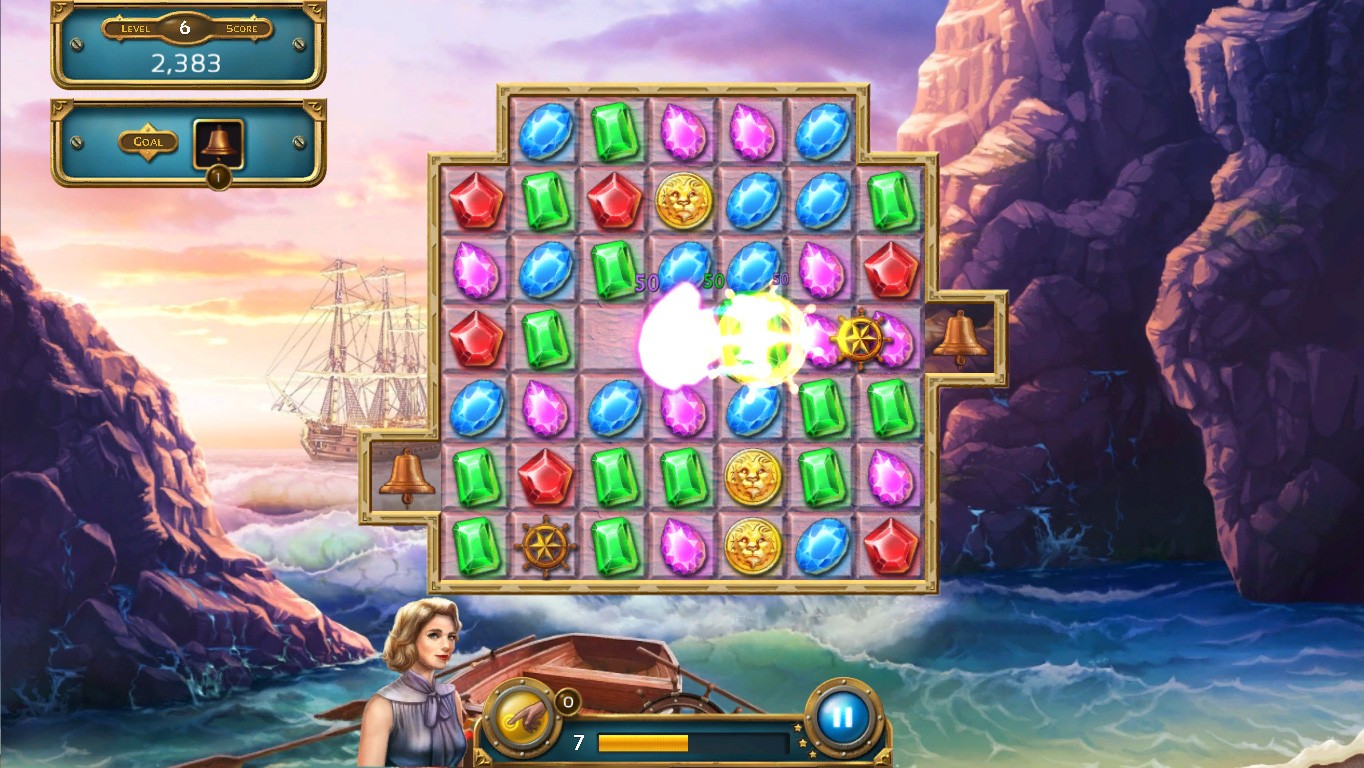 Layering these different elements together — ringing five bells and turning all tiles gold within a set time or turn limit, for example — amps up the challenge considerably. In fact, it’s really saying something that I wasn’t able to complete the first ten stages without a few retries here and there.

Mobile has been the dominant platform in the Match-3 world lately, so it’s of little surprise that Jewel Quest: Seven Seas will be available on iOS and Android in addition to PC and Mac this September. But mobile gamers might be surprised by what they find here. This isn’t the gentle gameplay with occasional roadblocks that you’ll often find on the App Store and Google Play. If the first 10 levels are anything to go by, Jewel Quest: Seven Seas is shaping up to offer a proper challenge for veteran match-3 aficionados. And that alone should be reason enough to put this one on your watch list.

Jewel Quest Seven Seas will be published by iWin, who also own Gamezebo. iWin did not contribute or otherwise have any input into the content of the article.

Jewel Quest: Seven Seas Wants to Send You to the Bahamas