Eating a candy bar might seem like a good idea to your taste buds, but not so much for the rest of your body. That’s why candy companies invented bite-sized treats, even though we know you end up eating nearly as many as the regular thing anyway.

There might be some similar thinking at work with RuneScape: Idle Adventures, a joint project between Jagex, the company shepherding the well-known RuneScape franchise, and Hyper Hippo, best known as the force behind the idle clicker AdVenture Capitalist. Together, they’ve come up with the only logical result of their specific areas of expertise, which is an RPG that delivers its story in super short chunks. 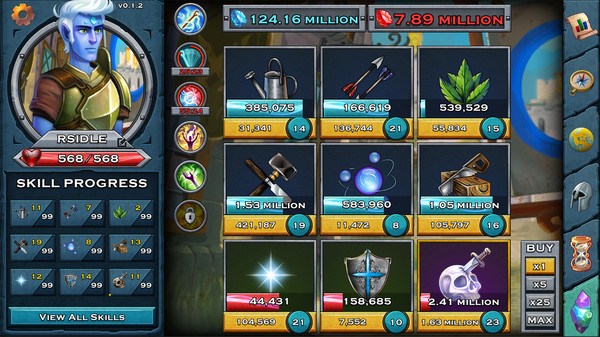 How short? Try 90 second play sessions, according to its recent press release. Yet it promises all the same lore and storytelling trademarks for which RuneScape is known, even if the way they’re delivered is somewhat different.

More from the release:

[quote]Developed with Hyper Hippo’s trademark charm, players create and take on the role of a curious, blue-skinned immortal of mysterious origins, who explores the iconic world of RuneScape in a brand new adventure. Players will discover the power of a new Elder Artefact as they battle monsters, challenge the gods, and grow cabbages for local farmers – all possible while waiting for other games to install, movies to stream, or cooking those cabbages.[/quote]

Heaven knows we could all use some more RPG in our life while waiting for the cabbages to boil. Better yet, in the vein of idle clickers of all kinds, progress can be made even when logged out, so as the Rolling Stones might say, time, time, time, is on your side (yes it is).

Now the only question is whether the story is good enough to suck you in for long play sessions anyway, somewhat defeating the purpose. To find out, you can check out RuneScape: Idle Adventures in its Early Access stage of life on Steam right now. It will roll out on mobile platforms when the full release hits later this year.

We’re Pretty Sure Super Duper Punch is a Boxing Game