Home / Upcoming / Return to Rusty Lake in Cube Escape: The Cave on March 23 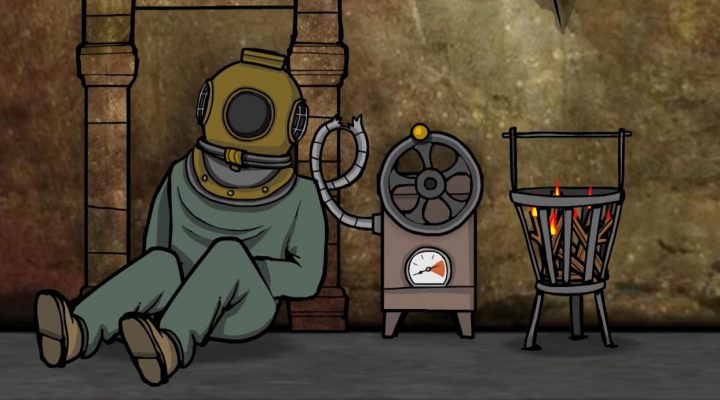 It’s hard to believe that the Rusty Lake series is less than two years old. The first release, Cube Escape: The Lake (the second chronologically) came out in April of 2015, and in the short span of time since has spawned nine follow-ups in the same universe. That universe is one of surreal, inexplicable events and characters which haunt (or worse) the inhabitants of and visitors to Rusty Lake. Although all ten games in the series are room escape / point-and-click puzzlers, their shared use of lurid set pieces and the ongoing mystery of the Rusty Lake area give them a suspenseful, horror-based aura as well. The last game in the series, Rusty Lake: Roots, maintained this oddly engaging uneasiness for the longest stretch yet, spanning an entire century in-game and hours of eerily satisfying, puzzling playtime.

Despite just giving us the massive experience of Roots only five months ago, developer Rusty Lake is already prepared to launch the eleventh and next game in the series, Cube Escape: The Cave. Though they use different titles, the Cube Escape and Rusty Lake series are nearly one and the same: games with the Rusty Lake header are generally longer and paid for, while the Cube Escape games are shorter excursions and free. That doesn’t mean they’re lacking in challenge or intrigue, though; many of the most memorable moments in Rusty Lake have come from the Cube Escape entries. (If you’re new to the series, we highly recommend Cube Escape: Seasons. Not just because it’s the first game chronologically, but because it still gives us chills.)

Cube Escape: The Cave looks like it will follow in its many predecessors’ footsteps and provide an equally unsettling experience. The trailer above gives us a hint of what to expect, with plenty of puzzles on display and a large cast of familiar faces, including Mr. Crow, Dale Vandermeer, The Woman, and even Harvey. The narrator references Plato’s Allegory of the Cave, stating “for most of us the life we see is merely as real as shadows from a fire dancing on the walls of a cave. That the truth behind everything went much deeper than those flickering shapes. And once you’ve seen that truth, to explain it to the rest of the world would appear as the words of madness. What will you find in the cave?”

Destroy or Be Destroyed in Crash of Cars