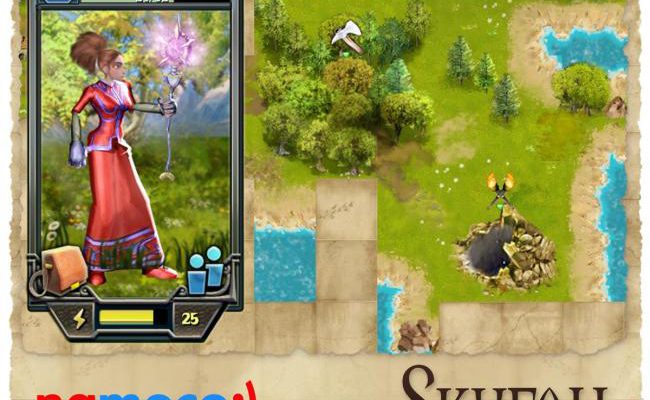 Gamezebo goes hands on with Skyfall

“I think the biggest thing for us is just designing an experience that’s meant to really work well on mobile smartphones and deliver the compulsions of a legit RPG.” That’s what Chris Plummer, the executive producer of ngmoco’s upcoming mobile RPG Skyfall, told us back in November. It seemed like a pretty lofty goal at the time. We’ve recently had a chance to go hands on with the game’s beta – has it managed to deliver on Plummer’s promise?

There’s a lot that goes into that answer, but in short, it’s an emphatic yes. Much like Playdom’s recent Marvel: Avengers Alliance seems to have raised the bar for free-to-play role playing games on Facebook, Skyfall seems to set a new standard for F2P RPG’s in the mobile space. That’s not to say the two games play alike in any way, but they’re similar in that they’re both revolutionizing RPG’s in their respective spaces.

Skyfall‘s play does this by capturing the spirit of what makes many RPG’s so great: the spirit of exploration. Players expend energy to clear away tiles that conceal the lands around them in a “fog of war” style environment. As they do, they’ll unveil new dungeons to explore, new NPC’s to gain quests from, random enemy encounters, and more. The world of Skyfall is huge, and uncovering it piece by piece is one of its quintessential joys.

As you explore, do battle, and complete quests, you pick up plenty of loot that your character can either equip or sell. Different equipment acts differently in battle, so there’s a lot of fun to be had in experimentation. And then, of course, there’s the combat.

Combat tends to be one of the most prominent elements in a lot of RPG’s, and in this, Skyfall is no different. How it’s handled, though, is through a unique touch screen mechanic that reminded us an awful lot of trying to hit a ball in Tiger Woods or Hot Shots Golf. Players will see a bar at the top of their screen, and when they tap to attack a cursor will move along the bar. Tap again when it’s in the green and you’ve made a hit. Tap when it’s in the red and you’ve done critical damage. Tap in the black, however, and it’s a miss. Different weapons have different bars, so having a super powerful weapon doesn’t necessarily mean much unless you have the reflexes you need to crit with it.

Skyfall‘s multiplayer component is pretty impressive as well. Making new friends in the game is never a problem (within a day you’ll have more than you can shake a stick at, if that’s how you decide to handle things), and that’s a good, because having friends can be a big plus here. Sure you can get extra energy by helping clear away the aforementioned fog of war, but the real plus comes from co-op battles, in which you can asynchronously take a friend into a dungeon with you, controlling both your character and theirs. It’s a great little twist, because not only does it help you beef up your strength, but it gives you a chance to play around with characters in classes other than your own.

While the game is currently available in public beta, tweaks are still being made and the official product launch won’t be happening until (probably) later this month. Still, if our pre-release experience is any indication, Skyfall should be a gamechanger of epic proportions. This is shaping up to be one of the deepest and most polished mobile free-to-play titles on the market today.

“There’s a lot of RPGs out there.”

That’s what Chris Plummer, executive producer on the upcoming free-to-play role playing game SkyFall, told us at a demo of the game last week. So you might be wondering then why ngmoco is tackling the genre with SkyFall. The answer is that the team behind the game felt that there wasn’t yet a mobile RPG that played to the platform’s strengths, offering gameplay that can be enjoyed both in short bursts as well as during longer, more involved sessions. Their goal is to make SkyFall that game.

The game takes place in a world of fantasy, in which the core of the planet is full of magic. This magic is then mined creating shimmering beams that shoot from the center of the planet up in to the sky. When the game begins some of these beams are flickering and you’ll be caught up in an epic adventure to determine just what’s going on. 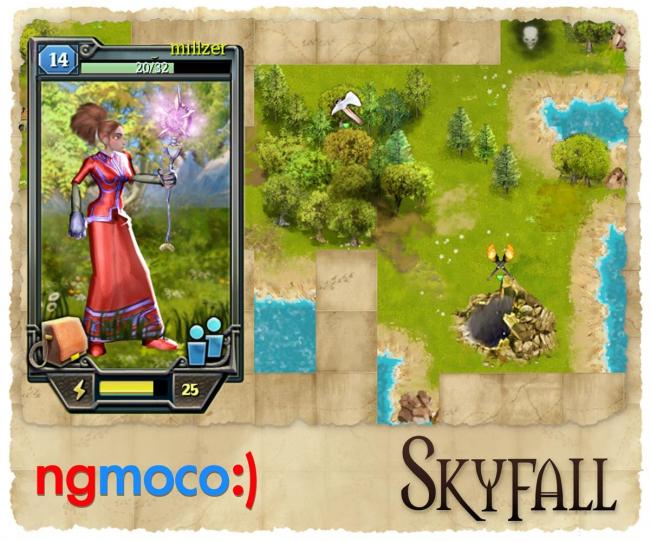 The gameplay itself blends elements of online RPGs and Facebook-style social games. You’ll explore dungeons and forests that span three different continents. Initially you won’t be able to see what’s ahead, but as you tap on the surrounding squares the world will slowly reveal itself to you. While in the dungeons and forests you’ll discover enemies to battle, places to mine resources, and characters who will give you quests. But there’s also an overworld where you can find towns and interior locations to buy and sell gear and meet up with other players.

You’ll be able to choose from three different classes of character (rogue, mage, and warrior), each with specific strengths and skills. You’ll also be able to customize them a great deal. Not only can you choose the gender and look of your character, but as you equip new gear it will be represented visually on your avatar. There are also four upgradable skills to improve as you gain experience.

Much of your time will be spent in combat, which is turn-based and has a heavy emphasis on timing. In order to attack, whether you’re using a weapon or a spell, you’ll need to tap a timed meter at just the right time. Tap while the meter is green and you’ll perform a standard attack, tapping in the red will result in a critical strike. What’s interesting, though, is that the timing bar for each weapon is different. So as you use a weapon you’ll be able to improve your skills as you become accustomed to it. Enemies range from infected spiders and bears to dragons that can get a couple of stories tall. 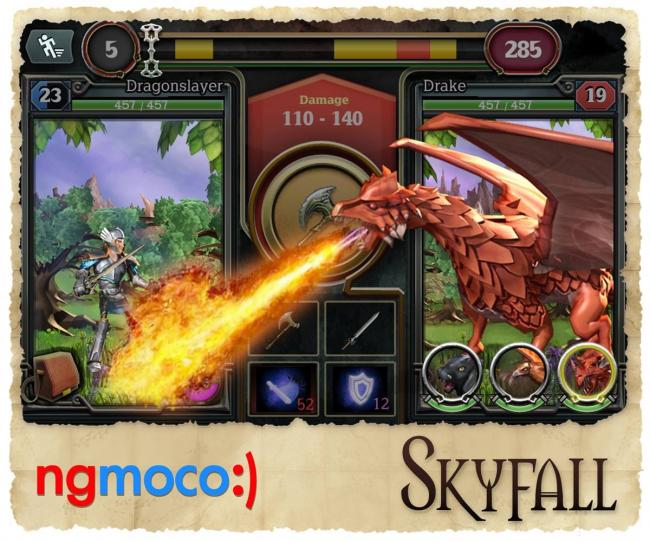 The quests, at least during the early portion we played, are pretty standard as far as RPGs go. You’ll need to collect a certain number of spider legs, for example, or chop down enough wood to repair a boat. There are dozens of quests to take on, which will earn you gold, experience, and of course loot.

Much like games like Diablo and Torchlight, collecting gear is a large part of the game. There’s an intuitive drag-and-drop menu system to keep things organized and we’re told that there are thousands of items to find in the game. You’ll collect lots of stuff, explained Plummer.

As a free-to-play game, SkyFall obviously has some premium content, which comes in the form of keys. Every so often you’ll come across locked treasure chests and you’ll have the option to either pick the lock or use a key. Using a key guarantees you’ll get whatever goodies lurk inside the chest, while picking the lock only works some of the time. You’ll earn keys slowly as you progress but can also purchase them with real money. 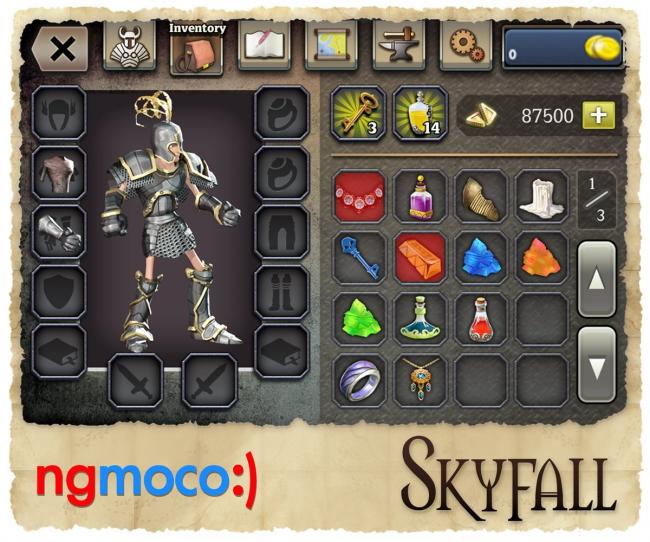 In terms of social features, SkyFall lets you team up with other players asynchronously as you explore. You can meet new people in town squares all over the world, and anyone you add as a friend can tag along with you to improve your chances of winning in battle. The game also features a recharging energy system common to social games that limits how much you can play in any given session. Essentially SkyFall appears to be attempting to merge to accessibility of social games with the depth of a traditional RPG.

You need to have depth or it’s not really a credible RPG, explained Plummer.

SkyFall will debut on Android devices before eventually making its way to iOS as well. No release date has been set, though Plummer said that there’s a good chance a live beta will be available sometime this year. It’ll be out when it’s ready,” he said.

Stay tuned to Gamezebo for our full interview with Plummer later today.