Home / Upcoming / Out of Your Mind Preview

Out of Your Mind Preview 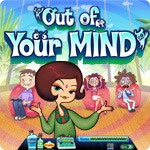 We’ve all been stressed out, over-tired and burdened with negative thoughts like jealousy and suspicion. Wouldn’t it be great if we could clean the mental junk from our brains as easily as we clean the plaque off our teeth?

In an upcoming new game from the folks at gamelab called Out Of Your Mind, you can do just that as the newest employee at Belinda Blissful’s Blissful Brain Holistic Luxury Spa. Your job is to go into your clients’ brains armed with a spool of “mental floss” and literally clear out all the gunk and nasty critters that are causing various neuroses and stresses.

gamelab offered us a sneak peak at the nearly completed game, and we were impressed with what we saw. Out Of Your Mind looks to be a creative, unique and humorous take on the quirks of spa culture with a healthy dose of good old-fashioned monster-zapping thrown in.

During a typical spa treatment, you’ll see a cross-section of the client’s brain that’s littered with puddles of brain gunk and crawling with creatures called nega-tics, which are physical manifestations of all the negative emotions that cause people stress. The nega-tics come in many shapes and sizes, and all have clever names like PessimisTic, NihilisTic, ApocalypTic and ChaoTic.

Your weapon against these nasty foes is your trusty mental floss. Using your computer’s mouse, you’ll unwind a piece of floss from the stationary spool, collect the roving nega-tics by stringing them onto the floss, and then drag them out of the brain. With at least one nega-tic on the line, you can also loop the floss around a deposit of gunk to cleanse it from the brain – sort of like scrubbing mud off the side of the car. By doing this repeatedly, you’ll eventually clear away the brain gunk and eliminate all the nega-tics, leaving the client with a squeaky-clean mind.

If nega-tics stay too long in the brain, they’ll eventually explode and create more brain gunk. You’re also in a battle against time, trying to clear your client’s before the time on their session runs out. To add to the challenge ever further, nega-tics, brain gunk and floss come in a variety of different colors, and brain gunk of a certain color can only be cleansed using nega-tics and floss of a matching color. Then there are the especially annoying mega nega-tics, giant variations of the normal nega-tics that cause all sorts of additional problems like sliming extra brain gunk around wherever they go.

As if that’s not enough to deal with, you’ll also encounter “mental blocks” that serve as indestructible barriers that will break your floss or make it more difficult to create a loop.

Thankfully, help appears in the form of posi-tics which, as the name implies, are positive thoughts that can help you get rid of nega-tics by doing things like shrinking their size (making them less likely to explode) or freezing them in place for a short amount of time.

The main mode promises more than 70 different brain sessions at the salon, and there’s also a Neverending NegaTics mode where you get to see how long you can hold out against wave after wave of nega-tics and self-replenishing brain gunk.

Out Of Your Mind boasts a stylish look that’s similar to games like Ciao Bella and Belle’s Beauty Boutique. Each brain session presents different arrangements of patterns, colors and mental blocks to create levels that are both challenging and visually appealing – for example, you’ll find levels where the gunk is arranged in a recognizable shape like a skull, or is spelling out various words.

Based on the preview alone, Out Of Your Mind looks like it would be a fun and creative addition to a casual game library, and a great game in particular for players who are artistically inclined and enjoy completing visual-oriented challenged. It’s part live-action puzzle game and part drawing exercise, with a kooky premise and great art direction too – and playing it might just stimulate your brain enough to draw out some of your own personal nega-tics.