Home / Upcoming / No Man’s Sky Has Dinosaurs AND Spaceships 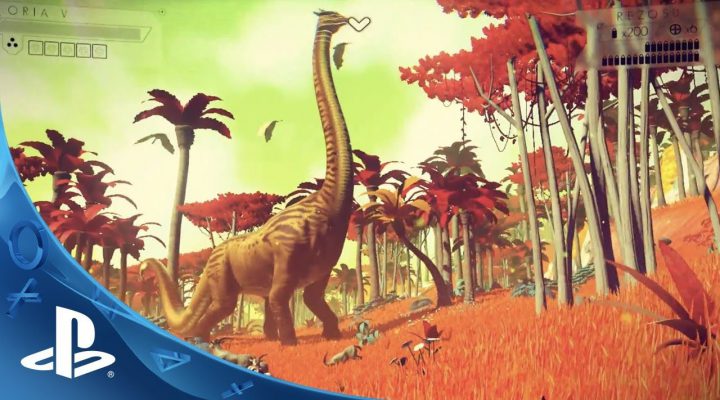 Hello Games’ upcoming No Man’s Sky for the PC and the PlayStation 4 may remind us of the most basic reason why we love video games. It gives you the freedom to point at a hazy planet in the sky, say to yourself, “I want to go there,” and just leap into a ship and go there.

Hello Games, the studio behind the Joe Danger stunt driving series, unveiled new trailers for No Man’s Sky yesterday evening. Sean Murray, the studio’s founder, got on stage at Sony’s E3 2014 press event and described how every player will begin their journey on a virgin planet that’s undiscovered and untouched by other players in the game’s universe. He described the content in No Man’s Sky as “procedurally generated” – meaning, according to him, even the game’s developers “don’t know what’s out there.”

We’ve been given an idea of what to expect, however: Planets with lush foliage, lumbering dinosaur-like beasts, and mineable resources. When you’re ready (and/or when you have the means), you can slip the surly bonds of your planet’s atmosphere, zip through asteroid fields, and land on the neighboring planet lying on the horizon.

Not a bad showing for a tiny indie studio that was nearly demolished by the floods that hit the UK last winter. There’s no set release date for No Man’s Sky yet, but we’ll definitely be gabbing about this game in the future.

Ori and the Blind Forest is Microsoft’s Next Exclusive Indie