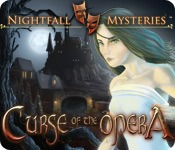 Nightfall Mysteries: Curse of the Opera is an upcoming hidden object adventure game where you take on the role of a lowly stagehand in an opera company tasked with solving a deadly mystery in an isolated village somewhere in Europe.

The game takes place over the course of a single terrifying night.  The Opera troupe is invited by the reclusive Count Vladd Vansig III to his small hamlet to perform a special Opera for him.  Strangely, there are no villagers to speak of except for the Count and his caretaker. Over the course of the night, characters start to go missing or are killed one by one, and it’s up to the player to find out the identity of the killer and escape the village alive.

Gameplay across Curse of the Opera‘s seven missions involves searching for hidden objects and special inventory items which will be used to activate puzzles elsewhere in the game. Players will also have the ability to move freely between scenes to explore the entire creepy village.

Nightfall Mysteries: Curse of the Opera is launching soon from Vast Studios for PC and Mac. Check out screenshots here, or chat about the game in our forum.