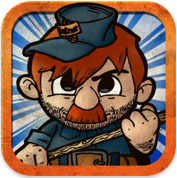 Fruit doesn’t fight back. Monsters do.

Maybe I don’t pay enough attention, but unlike the mass of games that are either “inspired by” or a straight-up clone of Angry Birds, I haven’t seen that same phenomenon apply nearly as frequently to the also wildly popular Fruit Ninja. Developers Drakkar Dev are bringing us Monster of Puppets (LOVE that name) which looks to introduce some nice twists on the Fruit Ninja formula. After all, like their tag line says, fruit does not fight back. Monsters do.

Animated puppets at a theme park come to life one night and it’s up to you, as the janitor Charlie, to fight them off. You’ll use a swipe across the screen to use your bladed weapons, tap to shoot guns, and use a two finger press to use energy beams against the bad guys. The weapons and abilities will be expandable as the game goes on. It all sounds like a fun way to breathe some new life into gameplay that people are instantly familiar with.

The first thing you’ll notice about Monster of Puppets is how good it looks. A cutesy slant has been given to the characters in a beautifully rendered circus/theme park atmosphere. This game looks like it could be a show piece for the graphics power behind iOS and Android phones. With a release date targeted sometime in the first quarter of this year, you know we’ll be anxiously awaiting Monster of Puppets‘ arrival to iOS and Android.

Escape from Age of Monsters Preview