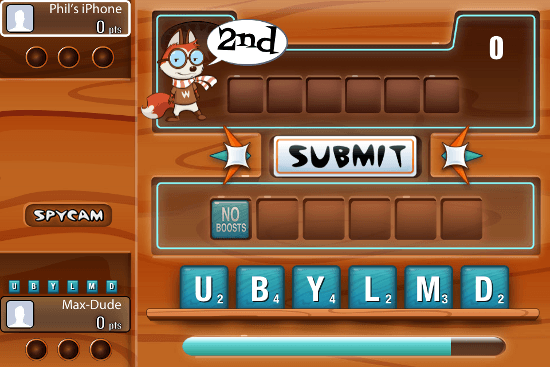 Three games in one! Exclamation point!

Big Fish knows that you don’t want to wait to play your favorite casual games against other players, because in the immortal words of Sweet Brown, “Ain’t nobody got time for that!” That’s why the company teamed up with JawFish Games to create Match-Up!,so you can get right down to business playing Word, Match-3 or Mahjong in live tournaments. Plus it’s got that exclamation point, so it can’t be dull.

With March Madness just around the corner, Big Fish picked the perfect time to release a title that focuses on tournament play. Match-Up! is all about the brackets, giving you a chance to pick your game and hop right into real-time tournaments that range from two to sixteen players. Actually I’m not sure a two-person bracket qualifies as a tournament, but you get the idea.

All three games feature the bold, colorful graphics that Big Fish is known for, and everything has a humorous twist as well. Word Rack is a Scrabble-like affair that has you forming words as quickly as possible with letters of various point values. The Match-3 game is called Qbeez, and incorporates a mechanic where you turn your device to help make matches. And Mahjong is… well, it’s Mahjong. It’s got kind of a long history, you know?

Players have the choice of entering completely free tournaments or risking some of their chips in order to win more. A variety of boosts can shake up play, and both chips and boosts can be purchased for real money if you need to get serious. Custom avatars and user IDs are part of the package, or you can choose to skip that step by linking your Facebook account and collecting some free chips. A host of leaderboards, statistics and achievements help keep track of how you stack up against other players all over the world. 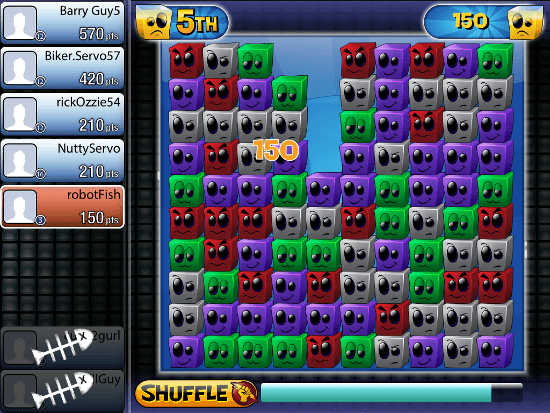 Match-Up! is already available in Canada for iPhone and iPad, and since we love brackets too, we’ll most likely have a full review here before too long. If you don’t have time to figure out when that might be, just hit the ‘Follow’ button up top and we’ll let you know.