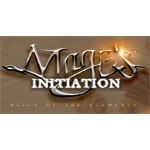 Himalaya Studios (makes of the Al Emmo adventure games) recently announced that they’re workign on a new point-and-click adventure game with role-playing elements called Mage’s Initiation: Reign of the Elements. According to the developer, Mage’s Initiation “will maintain the same charm that made the classic Sierra adventure games memorable, but with all the frustrating parts, such as dead-ends and over-reliance on trial and error, eliminated.”

Mage’s Initiation will offer four different mage character classes based on the four elements (water, air, fire, and earth), who each have different spells and battle systems. What sounds particular interesting to us is the fact that “rather than selecting a class at the beginning of the game, your element will choose you, in-game, depending on your decisions and behaviour.”

“D’Arc is sixteen years old. He has trained extensively in the elemental arts for the past decade of his young life, under the discerning eyes of the Mage Masters of Iginor. Confined to an existence of academics and magical mastery in their towering hall, the inquisitive initiate often wonders what it would be like to set foot outside in the world that he has been secluded from; a world that his Masters deeply shun.

As with all young Mages in training, D’Arc’s moment of initiation arrives and he is summoned to the Hallowed Hall, where the four Mage Masters put him to the test. D’Arc is tasked with completing three quests which will test his magical and mental strength to full capacity. He must return to the Mage’s Hall bearing a symbol of proof that he has conquered each task: a lock of hair from banished priestess, the unspoiled shell of griffon’s egg, and the horn of a trihorn.

Join D’Arc on a perilous journey across the medieval land of Igninor. Brave the perilous forest where redcap goblins stalk. Trek across a barren and lawless desert wastelands. Navigate over vast bodies of water where evil masquerades as beauty. And ascend beyond the lofty mountain peaks where the hostile race of Flyterians dwell. It is time for D’arc to prove himself. Succeed and he shall be initiated as a fully-fledged Mage, gaining the respect of his Masters and peers. Fail and nobody shall remember his name. Do you have what it takes to become a Mage?”

The game’s graphics will be rendered in highly detailed, high-resolution pixel art reminiscent of Sierra games from the late 1990s.

The developer anticipates that the game will be released in late 2012, and we hope to have more to share with you between now and then. In the meantime, you can preorder a Limited Edition copy of Mage’s Initiation from the game’s official promo page (where you can also check out some screenshots).

LEGO Pirates of the Caribbean: The Video Game Preview