Home / Upcoming / Lumines Is Coming Back, and It’s Headed to Mobile 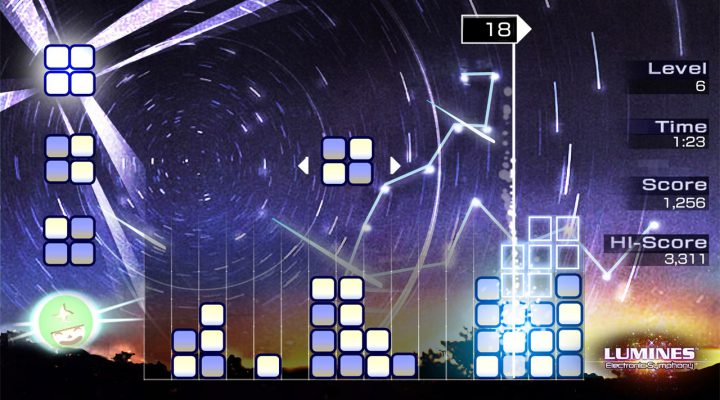 If you’re a fan of music, matching, and brilliant gameplay, it’s time to get excited: there’s a new Lumines in the works. And even better, it has its sights set squarely on iOS and Android.

Originally released for the PSP back in 2004, Lumines became something of a sensation among portable gamers. The goal of the game was to make 2×2 matching squares in a falling blocks environment. But the real trick, and what made Lumines stand out, was the need to make those matches before the timeline swept past again. As you progress and unlock different scenes, each has its own music, which in turn powers the timeline causing it to move at a different pace.

As far as puzzle games go, this has always been one of my personal favorites — and it’s been high on the list of games I’ve been hoping to see get ported to iOS and/or Android.

But it looks like Mobcast will be doing one better than just a port. They’ve acquired the rights to Lumines (as well as Meteos, though no word on what’s happening with that) from Q Entertainment, and plan to use those rights to create a brand new Lumines experience for smartphones.

And here’s the really good part: series creator Tetsuya Mizuguchi will be taking the helm. Mizuguchi’s US-based studio Enhance Games will be working alongside Mobcast to bring the latest version of Lumines to life.

There’s no word on when we can expect the game, or even if it’s coming to the West. But considering how popular Lumines was among North American PSP owners, and how large a cult following Mizuguchi has in the West (he was the brains behind games like Rez, Space Channel 5 and Every Extend Extra), it seems like a safe bet.

Either way, we’ll keep out fingers crossed, our eyes peeled, and will let the Gamezebo audience know when we learn more.