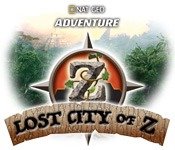 Merscom and National Geographic Games are teaming up to publish Nat Geo Adventure: Lost City of Z, a hidden object game based on the true-life legend of a lost city rumored to exist in the jungles of Brazil.

Players will explore the Amazon Rainforest and use tools and clues found along the way to follow in the footsteps of generations of explorers who tried to find the ancient civilization. This is more than just an archaeological adventure, however, because you’re also trying to find your missing sister.

The game features graphics based on high-resolution images from National Geographic.  According to Merscom, the game is launching in late September. Merscom has given us exclusive preview screenshots, which you can check out here. Chat about the game in our forum.