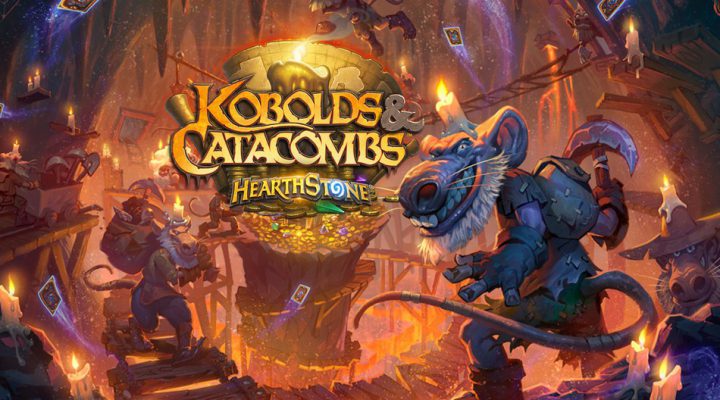 BlizzCon 2017 is underway, and it wouldn’t be an excellent BlizzCon without a big Hearthstone announcement. During the main stage opening ceremony, Ben Brode revealed the next expansion for Hearthstone, entitled Kobolds and Catacombs. It will feature an underground theme full of buried treasure, sleeping dragons and, of course, kobolds and their precious candles. You no take them!

We haven’t seen many of the new cards for Kobolds and Catacombs just yet, but we were introduced to a brand new mechanics: Recruit. Recruit allows you to summon a minion from your deck onto the board, though it’s not yet apparent whether this will be like the Discover mechanic (with three options) or if the minion is just random. The Recruit mechanic will be attached to various cards just like a Deathrattle, Battlecry, or Discover, and can potentially net you powerful minions for low mana costs.

We’ll see more cards as we approach the expansion, but the main focus of the presentation (and the thing that got me the most excited) was the reveal of a new, single-player mode called Dungeon Run. Dungeon Run adds an element of roguelikes to Hearthstone by setting out a challenge for players to defeat eight bosses with an ever-growing deck. You’ll start with a deck of only ten cards (pulled from your own collection), and as you defeat bosses, you’ll earn new cards to progress with. Lose, however, and all your progress is gone in true roguelike fashion. But the good news? This mode is entirely free-to-play for everyone. You can save your money to buy more packs!

Finally, we learned that the big “class card” addition this expansion will be class-specific weapons, even for classes that don’t normally have weapons. These legendary weapons will have incredibly powerful effects–the one we saw during the presentation, the priest weapon Dragon Soul, will summon a 5/5 dragon every time the priest casts three spells. Dragon Priest is coming back, baby.

Kobolds and Catacombs doesn’t have an official release date yet, but if past time frames of expansion releases are any indication, we’ll see it before the end of the year and perhaps by the end of the month. Keep an eye on BlizzCon 2017 and popular Hearthstone streamers in the coming weeks, as we’re likely to see more and more card reveals and get a better picture of the upcoming meta as it draws near.