Home / Upcoming / Half the Sky Movement: The Game Preview

Half the Sky Movement: The Game Preview 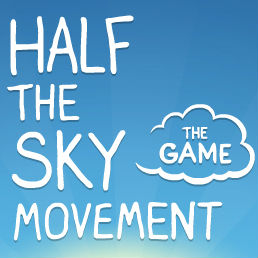 Raise awareness and make a difference in the world with this inspiring Facebook game.

It’s very rare these days to find a game with a real social relevance, and one that advocates gaming for a cause.  So when we at Gamezebo hear about exciting new game-based charity projects like Half the Sky Movement: The Game, it shows that more and more people are beginning to see the widespread power of gaming: which is great news for us, because it means more amazing games are on the way!

Pulitzer-Prize winning authors Nicholas Kristof and Sheryl WuDunn have announced Half the Sky Movement: The Game, a groundbreaking Facebook adventure game that aims to “raise awareness and donations to empower women and girls around the world.”  The game has already garnered support from big-name corporations like Zynga.org, Ford Foundation, and Intel Corporation, just to name a few. All of the game’s revenue will be directed towards charitable causes through the non-profit Games for Change platform, and benefit The Fistula Foundation, GEMS, Heifer International, United Nations Foundation, ONE, Room to Read, and World Vision.

But with a primetime PBS TV show under their belt, and the already huge success of the Half the Sky Movement cross-media platform (not to mention the #1 New York Times bestseller Half the Sky: Turning Oppression into Opportunity for Women Worldwide), why turn their efforts to gaming now? For Kristof and WuDunn, the answer was simple: “We want to reach a broader audience for these issues we care deeply about. We hope that a Facebook game that is fun and viral can be a way to do that, reaching people who aren’t now interested in women’s empowerment.”

Players will start their global adventure in India, and make their way to Kenya, Vietnam, and Afghanistan, before ending the enlightening trip in the United States. Each country is wonderfully distinct and vivid, with that classic cartoon polish of a social game. But here’s what makes Half the Sky Movement: The Game so extraordinary: performing simple, in-game tasks will gradually unlock funds from the game’s sponsors for up to an initial total of $500,000! For instance, collecting books for young girls in the virtual game will activate a real-life donation to Room to Read by way of the Pearson Foundation. Perhaps even more outstanding than that is how you can collectively trigger funding from Johnson & Johnson to unlock life-saving surgeries. That’s pretty amazing if you ask me. In addition to this, players will also have the option of making personal donations at any point in the game, and to whichever non-profit partner they choose. This is one in-game micro-transaction I think everyone can stand behind.

Half the Sky Movement: The Game will arrive on Facebook on March 4th, kicking off the week of International Women’s Day. Be sure to check it out, even if only for 15 or 20 minutes, because each one of those minutes will help increase awareness, and work wonders towards making a real difference in the world.