Home / Upcoming / Futurama: Worlds of Tomorrow Arrives in the Present on June 29 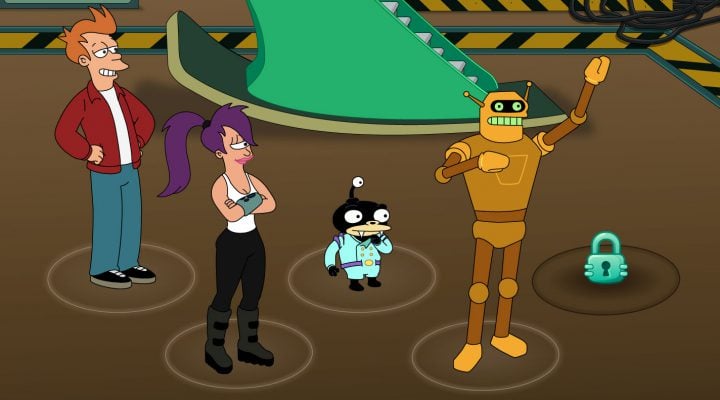 It’s not uncommon for mobile game publishers to wait until the day their games hit the app stores to announce that they are being released in case something goes awry with the launch date. We have a theory, though, on why Jam City are so confident that Futurama: World of Tomorrow is going to hit iOS and Android on Thursday, June 29.

They have knowledge of the future, of course! That’s really the only explanation that makes sense, and between Professor Farnsworth’s inventions and the misadventures of the Planet Express crew, it’s definitely possible.

Or it could be a result of the big brains who appear both in the game’s latest trailer and as playable characters in Futurama: Worlds of Tomorrow itself. We’re talking Stephen Hawking, George Takei, Bill Nye and Neil DeGrasse Tyson, no slouches among them.

As for the game itself, it promises to mix “simulation, combat, galactic exploration, and choose-your-own-adventure gameplay,” according to its makers. Plus it has a cast of characters you’ve loved for years, assuming you have good taste in animation, and it’s free to play.

Thus, we’re thinking it won’t take any “persuasion” from Hypnotoad to get you to pre-register for the Android version or to visit the game’s official site for notification when it’s officially live. The alternative would be to have Nibbler put you on ice until release day, but trust us, just getting notified or hitting the app store of your choice on June 29 is probably easier.

Next Games’ Next Project: A Blade Runner 2049 Game