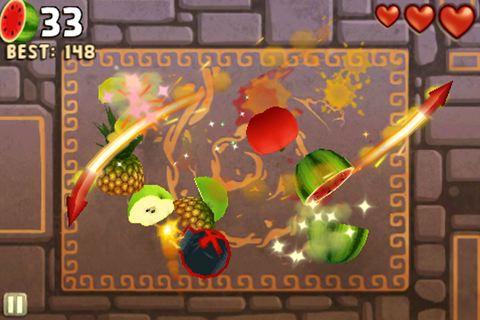 The Shrek franchise is no stranger to promotional video games. Heck, even the App Store is littered with them, from Shrek Forever After to Shrek Kart and Make Shrek Roar. What the Shrek franchise isn’t used to, however, is having a good promotional video game. It looks like that’s about to change though, as Dreamworks has teamed up with mobile games heavyweight Halfbrick to bring Fruit Ninja: Puss in Boots to the App Store later this month.

While it was a relatively quiet summer for such pairings, 2011 seems to be the year where kids’ films and hot mobile gaming properties learn to make sweet music together. We first saw it with Doodle Jump: Hop and Angry Birds Rio; two games that, much to our surprise, managed to build on the pre-existing gameplay rather than simply slap a coat of advergame paint on. And from what little we’ve seen, Fruit Ninja: Puss in Boots looks to offer the same step forward.

In addition to the Fruit Ninja gameplay we all know and love, Fruit Ninja: Puss in Boots will offer two new modes. Bandito mode will present players with a series of challenges, such as slicing giant fruit (from a giant’s castle, of course), precision and timing challenges, and new obstacles.

Desperado mode will be a remix of the Fruit Ninja‘s Classic mode, featuring unique waves and “magic beans” as featured in the upcoming Puss in Boots motion picture. 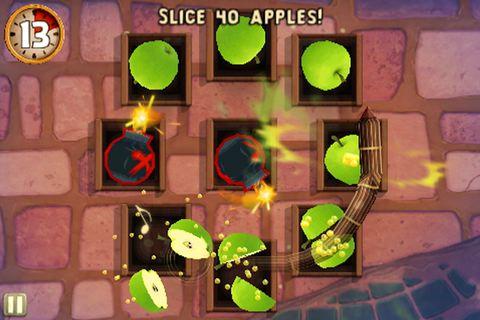 Oh – and this time around, they’ve added the one fruit that ketchup hounds have been clamouring for – the tomato. (It is TOO a fruit!)

New backgrounds, new blades, and more will round out the package, making this a no brainer for any fan of the original Fruit Ninja game (ie, everybody). Expect this one to hit the App Store on October 20th, with an iPhone version at 99 cents and an iPad version for $1.99.