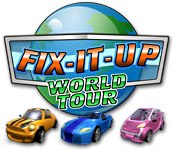 World-Loom is working on Fix-it-Up 2: World Tour, a sequel to the time management game Fix-it-Up: Kate’s Adventure. Kate’s Adventure ended with a "To be continued…" cliffhanger ending, and World Tour continues the storyline while introducing new characters both friend and foe.

The game’s career mode will span 54 levels across 18 different locations in various countries around the world. New features include the ability to upgrade buildings to make them more environmentally friendly and clients who are more interactive and expressive about letting players know exactly which cars they want to buy.

Players will now be able to build their very own mansion from coins they’ve earned for completing levels with a Silver time ranking. Speaking of time, there won’t be a hard and fast time limit (outside of special levels), so there won’t be any stress about running out of time.

Fix-it-Up: World Tour is launching soon. In the meantime, check out some screenshots of the game, or chat about it in our forum.