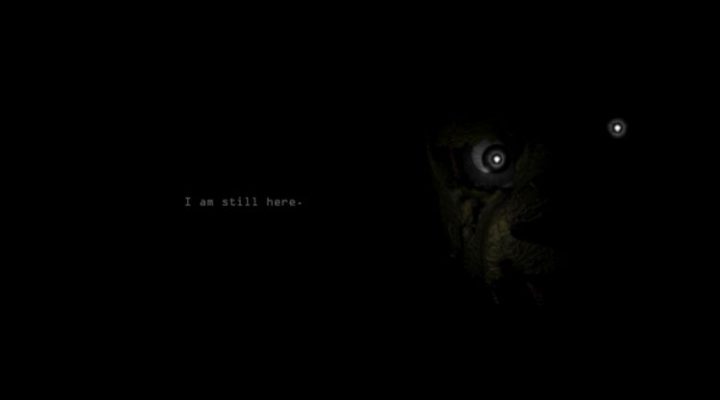 Holiday merriment is over, and 2015 is officially underway. It’s time to shake off the Christmas-induced lethargy and get back to work.

The teaser image in question is swathed in shadow, but our best guess is that it’s a snapshot of a moldering Freddy Fazbear animatronic – possibly even “Golden Freddy,” a particularly horrific and rarely-seen puppet that’s the basis for a lot of myth and speculation in the Five Nights at Freddy’s universe. Is this an indication that the next game is incoming, or is Cawthon merely saying “Happy New Year” in his own special way?

Taking into consideration that Cawthon has been dropping hints on his Twitter account recently, our money is on FNAF 3.

Also, the super sleuths in reddit’s r/fivenightsatfreddys community played around with the image and found a hidden “3” in the bottom right-hand corner — and we couldn’t help but notice the file name on the image as it appears on scottgames.com is fnaf3.jpg. The more we hear, the more Five Nights at Freddy’s 3 is sounding like a sure thing. (And with how successful the first two games were, it would be silly if it weren’t).

Whomever that new animatronic is, Mr Bear has an unsettlingly human-looking pair of eyes and is accompanied by the text “I am still here.” You can stuff your face with turkey and yams, but fact of the matter is, evil never truly takes a holiday.

When an official Five Nights at Freddy’s 3 reveal is in the cards, we’ll let you know.