Fish Out Of Water Preview 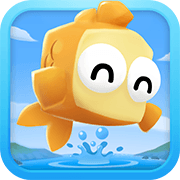 I wouldn’t want to be stuck in a fishbowl either!

Unless you’ve been living under a sad and lonely rock for the past couple of years where there’s not a smartphone or iPad to be found, you’ve probably heard of Halfbrick before, or played their mobile-defining games Fruit Ninja and Jetpack Joyride. The renowned mobile developer has been cryptically hinting at a new beach-themed game on their website for a few weeks now, and today they have finally parted the sea to reveal their next exciting project that will take the mobile world by storm: Fish Out of Water.

Judging from the debut gameplay trailer that just surfaced, it looks like players will start off each stage by flinging their fish out over the sea using a slingshot mechanic from the Angry Birds games. As you speed along the water, you’ll launch your fish above the surface to snag some in-air collectables, before splashing back down under the waves to keep swimming through the ocean, complete with dynamically changing weather. Phew, my fins are already getting tired from just typing this! It also seems like you’ll be judged on some of your jumps by a panel of rainbow crabs, which hold up little score cards like they are judging a diving competition.

Fish Out of Water features a colorful cast of aquatic sea friends to play as, including Olympus the goldfish, Errol the puffer fish, Finlay the dolphin, Micro the whale, Rocket the piranha, and a school of tiny feeder fish called The Brothers. Each character has their own quirky personality and playing style, and the bright and sunny graphics are only matched by the game’s lively tropical soundtrack. In Fish Out of Water, players will also be able to create a number of different colored charms that add special swim-time abilities, like “boosties” to your boost bar, so you can earn those top scores, compete with your friends, and keep those overly critical crabs happy.

No word on an exact release date for Fish Out of Water just yet, but the game’s newly-launched website tells us that the “sea of adventure” will launch soon for iOS devices – and something tells me it’s going to make quite the splash on the App Store when it does.