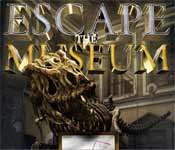 Back in January Gamezebo posted a brief summary and a handful of screenshots for Escape the Museum, the upcoming adventure/hidden object game from Gogii Games. Over the past few days we’ve managed to sit down and spend some time with a playable preview version of the game, and we’re happy to report that it looks to be shaping up very nicely in time for its late-February scheduled launch.

Museums aren’t usually thought of as dangerous places, but the National Museum of History unexpectedly becomes a disaster zone for its chief scientist Susan and her daughter Caitlin, who get trapped there and separated during a powerful earthquake.

With the museum’s interior badly damaged and the structure itself seemingly ready to collapse at any time, Susan, with your help, must make her way through the rooms of the building to find her daughter and escape before the place comes crashing down for good.

With the handy museum map loaded into Susan’s PDA to guide you, you must make your way from one room to the next while figuring out ways to overcome obstacles and hazards that the earthquake has put in the way.

Your first challenge, for example, is the museum vestibule, a majestic room with a giant Tyrannosaurus Rex fossil as the centerpiece. During the quake the dinosaur’s enormous and heavy head has fallen in front of the door and blocked it, so you have to find a way through the door using whatever meagre resources are available to you. All the while the screen is shaking with ominous rumblings and debris and dust is falling down around you to add a further sense of danger and urgency.

Like similar themed adventure games such as Azada and Dream Chronicles, you can click on certain objects to add them to your inventory, and then select that item to use on a different location in the scene (such as using a key on a locked door). When the mouse scrolls over a point of interest that can be examined more closely, like a display case or drawer, it will change shape and allow you to click and zoom in for a closer look.

Side-stepping hazards like live electrical wires, collapsed ceilings and security lasers is a big part of Escape the Museum, but these interactive puzzles are also interspersed with straight-forward hidden object searches as well. Here, the goal is simply to visually scan through the considerable rubble and pick out specific objects from a list.

One of the highlights of Escape the Museum looks to be the sheer variety and richness of its scenery. Museums are visually stimulating at the best of times, but the game takes things a step further by showing us partially destroyed versions of familiar exhibits like Ancient Egypt, Medieval England, Greece and Rome, History of the Earth & Solar System and the Wild West. One of our favorites was Ancient Fish, a room dedicated to Trilobites and other fossils with a giant prehistoric shark hanging precariously from a chain on the ceiling. These vibrant settings are in addition to the cloak room, maintenance room and other more utilitarian locations for a total of 40 scenes.

Because the version we tried out was only a preview copy, we didn’t get to experience the voice-overs and cutscenes that have been announced for the final version, nor did we sample the exciting-sounding Finale Master Hunt that involves finding “exhibit specific” objects hidden throughout the whole museum instead of in a single scene. But suffice it to say, Susan’s dramatic and suspenseful ordeal is one that should keep players clicking – not just to find out what happens at the end, but to experience (from a safe distance!) what it might be like to find themselves in her place.